UK to cut 'all avoidable plastic waste' by 2042

The British media are really campaigning about plastic pollution...

This is from the Telegraph:

The stark truth about how long your plastic footprint will last on the planet . There are certain things we want to make sure we leave behind for our children and grandchildren after we're gone, such as a financial nest egg or a property to inherit. But we are also unwittingly creating a toxic legacy of plastic waste that will blight future generations for centuries to come. The disposable plastic products we use everyday are anything but disposable in environmental terms, and can take over 400 years to biodegrade. The booming production of plastics in recent years, partly fuelled by demand for single-use items such as coffee cups and bottled water, means the world has manufactured more plastic in the last decade than in the whole of the previous century. 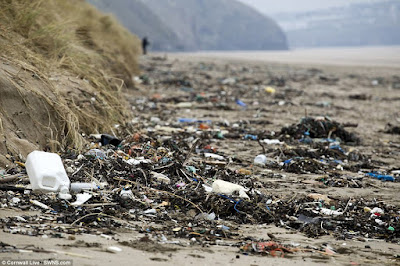 Richard Thompson, a professor of marine biology at Plymouth University, explained how piles of waste from the seabed were brought to the surface by Storm Eleanor. He told the Mail: ‘Plastic drifts backwards and forwards with the waves, out of sight and out of mind. But a big storm can rip things from the seabed and throw them back on to the shore. In the same way that you’ll find natural debris or dozens of starfish washed up after a storm, the litter we’ve dumped is stirred up in the sea and comes back to shore again.’

Meanwhile, the Scottish government has upstaged the UK:
Scotland to become first part of UK to ban plastic cotton buds - The i newspaper online iNews
Sturgeon hits out against UK's 2042 deadline for 'urgent' problem of plastic pollution | HeraldScotland

The response has been mixed - from environmentalists:
The War on Plastics: Is It Too Little Too Late? | Technology Networks

Theresa May, charging us for plastic won't make up for those awful Tory environmental policies you're keeping quiet about | The Independent
Plastic: Green groups welcome Theresa May’s plan to cut use - PM NEWS Nigeria

And from the plastics industry:
WRAP launches collaborative initiative with industry

UK Prime Minister Theresa May has unveiled a plan to eradicate all avoidable plastic waste by 2042. Reuters reports that by placing a new environmental agenda center stage, “May is keen to put divisions over leaving the European Union, scandals and an ill-judged election behind her and try to broaden the appeal of her Conservative Party.”

May announced the initiative during a speech today at the London Wetlands Centre. Highlighting the issue of plastics pollution, May said that people in the future would be "shocked at how today we allow so much plastic to be produced needlessly," reported the Guardian. The only immediate new policy, however, was to extend a 5 pence charge for plastic bags to smaller shops in England, added the article. Small shops have been exempt from the plastic bag fee, unlike in Scotland, Wales and Northern Ireland, where the fee has been successfully implemented across the board.

The plan also encourages the development of “plastic-free supermarket aisles.” The government will explore whether supermarkets can introduce aisles where there is no plastic packaging and all the food is loose, according to the Guardian.

Setting an example in the eradication of avoidable plastic waste, May said that the government would seek to reduce single-use plastics in its workplace and suggested that other large organizations should consider banning staff from using them in their workplace, as well.

The 25-year green plan also includes a number of exploratory proposals to expand habitat for wildlife and protected areas along the coast and create a statutory environmental watchdog.

Responding to May’s speech, the British Plastics Federation (BPF) said in a press release that it was “disturbed” by the tone, which “does not recognize the important benefits that the plastics industry brings to the UK, including 170,000 jobs.” The association makes the point, as has PlasticsToday in numerous articles, that plastics save energy, enable fuel savings in vehicles and aircraft through lightweighting and prevent food waste. “Plastics should not be in the sea,” adds the BPF, “and it is right that the UK, alongside other developed nations, should set an example of best practice.” It goes on to say that much of the plastics in the ocean come from “less developed economies of Asia, which have rudimentary waste management systems.” It also calls for a tougher stance on littering.

May’s proposals did not entirely please environmental groups, either. Pressure groups gave a lukewarm response to the plan, “praising its ambition but warning that it lacked sufficient proposals for immediate action,” writes the Guardian.

“It is a long-term plan, it’s about the next 25 years,” May responded. “But it’s a plan which I think speaks to everybody who has an interest in our environment and everybody who wants to ensure that future generations are able to enjoy a beautiful environment.”

With a campaign just underway from 38 Degrees:

Introduce a tax on throwaway plastic

Our oceans are choking in plastic. The amount of plastic littering our beaches is rising. [1] That means more plastic bottles, straws, cups, lids, and cutlery are covering the UK’s beautiful coastlines. [2]

The shocking headlines on plastic pollution are splashed across the papers. [3] The government has seen them. That’s why they’re desperate to show they’re doing something about the problem. [4] Here’s one way we can make sure they do enough:

Right now they’re weighing up a small tax on all ‘throwaway plastics’ to try to cut down on their use. [5] It would mean, for example, when you buy a takeaway coffee there'd be a small charge for non-reusable cups. It already works for plastic bags. [6] A petition with thousands of signatures could be the thing that convinces the government to introduce a tax on throwaway plastics. It would protect our oceans for generations to come.

If you agree the government needs to do more to protect our oceans and environment, add your name now: SIGN THE PETITION

This petition's been started on the 38 Degrees website by City to Sea, an expert organisation that tackles plastic pollution. [7] Last year they launched a campaign to get shops to switch from plastic to paper cotton buds. 150,000 of us got involved - and we won. [8]

A tax on throwaway plastics would be a simple solution to a huge problem. We just need to convince the government to take the first step. Since the 5p charge on throwaway plastic bags was introduced, their use has plummeted. [9] Now, lots of us don’t think twice about taking a reusable bag for our weekly shop. It goes to show that small changes like these make a big difference when it comes to plastic pollution.

[2] Here are some photos to show the problem: Daily Mail: Let's turn the tide on plastic

[3] The Telegraph: The stark truth about how long your plastic footprint will last on the planet
The Mirror: Heartbreaking video of seal struggling to free itself of plastic bag prompts desperate calls to clean up British seas
The Independent: Blue Planet II: Whales dying from pollution as they ingest toxic plastic

[7] You can read more about City to Sea here: https://www.citytosea.org.uk/