The UK government "should bring in an environment act immediately"

There has been a lot of comment following on from the Prime Minister's pledges on green issues yesterday:
Futures Forum: UK to cut 'all avoidable plastic waste' by 2042

Here's an analysis from the BBC's environment correspondent:

Analysis by the BBC's Roger Harrabin 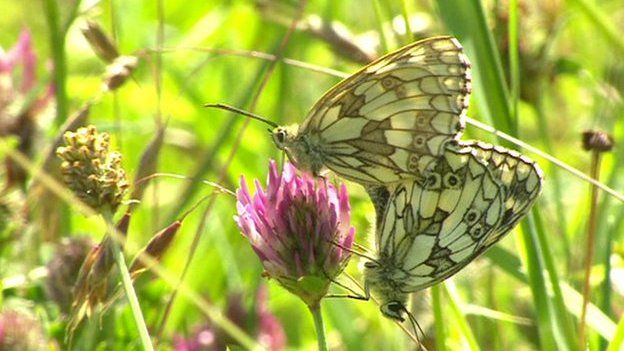 Many wildflower meadows have been destroyed

Thursday's announcements are the culmination of an environmental week for the government. On Sunday, Mrs May promised a clampdown on plastic waste. On Wednesday, plans emerged to extend the 5p plastic bag charge to include corner shops in England.

Ministers have been under political pressure to do more for the environment after it was identified by the Tory think-tank Bright Blue as the key issue for young voters, who failed to back the party in large numbers at the 2017 general election.

Environmentalists agree that the government's plan to restore nature - not just safeguard nature - is genuinely radical. Many of the UK's landscapes have been ravaged by development, intensive farming and sheep grazing. Only 2% of wildflower meadows have survived.

I understand that the document will cover many policy areas, including: managing land sustainably; enhancing nature and recovering wildlife; increasing people's health and well-being through nature; resource efficiency, reduction of pollution and waste and protecting and improving the global environment.

But there is scepticism about how far the environment department Defra will be able to carry out its plans. There are huge pressures on the natural world from urgently needed house-building; HS2 threatens scores of ancient woodlands; and the Department for Transport has a major road-building programme.

Green campaigners said Mrs May's plans could simply be shelved if they become inconvenient and the promise to stop "avoidable" plastic waste is too vague.

"Britain's natural environment needs a 25-month emergency plan more than it needs a 25-year vision," said Greenpeace UK's executive director John Sauven. "If the government's aim is to get through to young voters, they need to offer change that happens before these youths turn middle-aged."

Greenpeace questioned why there was no mention of deposit return schemes for bottles - which the government has said it will consider - while Friends of the Earth said a "clear timetable" not "woolly promises" was needed.

Sue Hayman, Labour's environment spokeswoman, said the Conservatives had a record of "failure and broken promises" on the environment. She said the "weak" proposals would mean the problem with plastic waste was "kicked into the long grass".

The Liberal Democrats said it "beggared belief" that a target of 2042 had been set for removing plastic waste and that action was needed now.

Here is the response from the UK's Green Party MP writing in the Independent:

Theresa May, charging us for plastic won't make up for those awful Tory environmental policies you're keeping quiet about

Reducing plastics in the ocean is like treating heart disease with a bypass, without changing your diet or taking up regular exercise. The greatest threat we face to our oceans is, without doubt, climate change 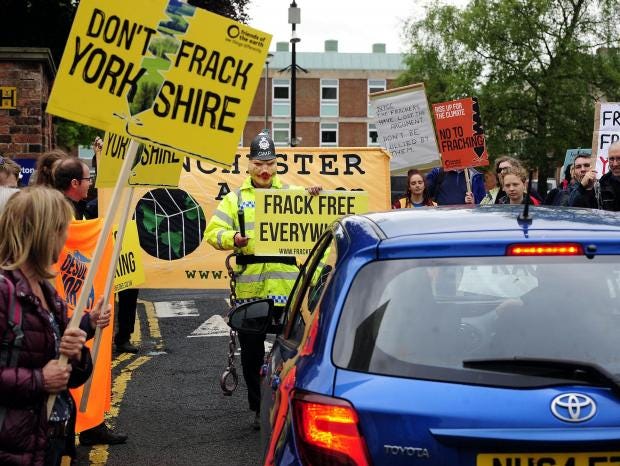 Not only do ministers continue to back fracking, against the wishes of local communities, but they hand subsidies to gas and oil. PA

Theresa May’s speech on the environment today, which comes hot on the heels of internal polling by the Tories showing that they are seen as “not caring enough,” managed to be both highly significant and utterly underwhelming. Its significance lay in the fact that it happened at all – it is rare to see a Prime Minister take to a stage and set out their green credentials. Indeed it hasn’t been since David Cameron went on his Arctic husky-hugging PR stunt that we’ve seen such a concerted Conservative effort on this issue. But having listened to her speak, I’m yet to be convinced that Theresa May is as deeply committed to this cause as she tries to make out.

To give the Government credit where it’s due, there has been some serious progress made. In the 25-year plan, released today, it’s promising to see the Government focussing on giving more children access to nature and planting more trees across the country. But with the Government providing only around 1 per cent of the funding needed for the Northern Woodland and with HS2 set to plough through 30 ancient woodlands, their forestry plans don’t necessarily stand up to scrutiny.

The "Blue Planet policies" aimed at protecting the seas are good too – in particular the microbeads ban, though that only covers around 1 per cent of marine plastics. The plastic bag charge announced today is positive, but it should be noted that it follows the demands of an EU directive. It must also be said that the pledge to rid Britain of “avoidable” plastic waste over a 25-year period is remarkably unambitious both in terms of language and timescale. Similarly there are positive sounds in the 25-year plan about “voluntary and regulatory interventions” to reduce the amount of litter. But, why not just commit immediately to a deposit return scheme?

What was most striking about the Prime Ministers speech, however, was what was missing. For a start there wasn’t a plan for comprehensive legislation to lock in the Government’s plans. Alongside green groups I’ve been calling for an environment act to protect our natural world in this post-referendum chaos – but ministers have refused to act.

Then there’s the biggest threat we face: climate change. Stopping climate breakdown won’t happen by tinkering around the edges of an economy reliant on fossil fuels – which is why the Government’s record doesn’t live up to May’s claim today that we are “leading the world on climate change”. We know the facts: 80 per cent of known fossil fuel reserves must stay in the ground if we’re to have a decent chance of stopping the worst effects of climate change. Look at the Tories climate policies through this lens and their record doesn’t appear quite so rosy.

The charge sheet of failures is, sadly, long. New onshore wind farms are effectively banned; solar subsidy cuts have caused the loss of thousands of jobs; the budget announced no new funding for renewables until at least the mid-2020s. And it’s not just a lack of support for clean energy that’s undermining efforts to tackle climate change – the Government is also deeply committed to fossil fuels. Not only do ministers continue to back fracking, against the wishes of local communities, but they hand subsidies to gas and oil – with the Prime Minister boasting at the end of last year of the “£2.3bn package of measures in the last two budgets, to make sure that the North Sea continues to attract investment and to safeguard the future of that vital national asset”.

Reducing plastics in the ocean, in the context of implementing policies that contribute to climate change, is like treating heart disease with a bypass, without changing your diet or taking up regular exercise. It’s not a serious, sustainable solution for the long term. The greatest threat we face to our oceans is, without doubt, climate change – which causes habitats to be destroyed by temperature changes, acidification and coral bleaching.

So, what should a truly green government do? For a start they should bring in an environment act immediately and flesh out suggestions in the 25-year plan for a watchdog to oversee environmental protection post-Brexit. They should bring the plastics ban forward – and implement a bottle deposit scheme now. They must also ban fracking – following the footsteps of Scotland and many other nations. They should then commit to long term support for renewables and end the yearly freeze on fuel duty. These policies would only be the start, but they would signal a serious intention by the Government to get a handle on the environmental crisis.

Avoiding the worst effects of environmental breakdown is still possible. But, it requires serious leadership from countries like Britain. In recent weeks the Government has gone from scoring about 2/10 on environmental protection to maybe a 5/10 – leaving quite some room for improvement. The 25-year plan published today might not go into the detail we might have wanted. But, it’s a step forward. Clearly public pressure is paying off – and it’s now down to the Government to show that their commitment to our natural world goes deeper than just a green veneer which plays well in focus groups.

Theresa May, charging us for plastic won't make up for those awful Tory environmental policies you're keeping quiet about | The Independent
.
.
.
Posted by Jeremy Woodward at 01:00