There have been several Freedom of Information requests made of late to the District Council about housing issues:

1) What information, documentation or consultation, if any, your council has received on a "new standard methodology for calculating 'objectively assessed need'"

It is not clear what is meant by the term “housing plan”. In so far as planning policy matters are concerned, our local plan was developed over the second decade of this century and adopted in January 2016. It sets out details of assessment of housing needs and policies to address this need. It can be viewed at: http://eastdevon.gov.uk/planning/planning-policy/local-plan-2013-2031/

3) What information, documentation or consultation, if any, your council has received on a "new housing delivery test"


Refused council nomination for accommodation due to affordability

We are not able to run a report that will determine the number of applications that have been turned down due to affordability. In order to retrieve this data we would need to manually search through an extensive amount of records looking for individual cases where this has been the case. We estimate that the retrieval and collation of this information would exceed reasonable time and cost limits as specified under s12 of the Freedom of Information Act.
Date responded: 4 January 2018

Meanwhile, the Herald has submitted an FOI request - and has received a reply:

More than 3,000 families are on the waiting list for a council house in East Devon. 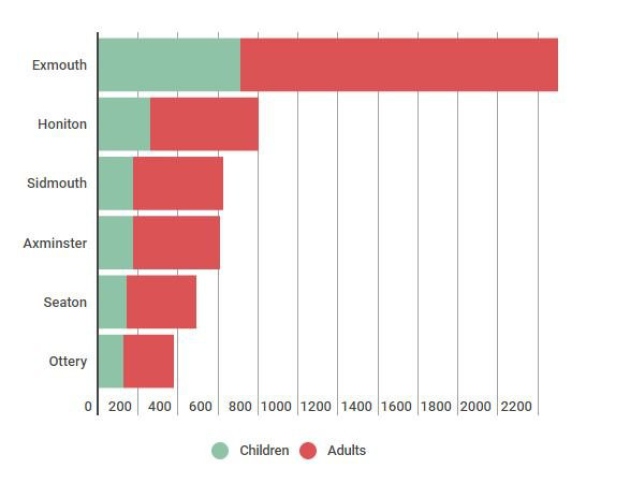 The number of adults and children on the list in the top five towns, with the highest number of families waiting.
In the last three years, the list has grown by around 46 per cent, a Freedom of Information (FoI) request submitted by the Herald has revealed.
Council bosses have said one of the reasons for the rise is that many applicants cannot afford to rent privately or purchase a home in the district, so turn to the authority and housing associations for assistance.
The statistics, released by East Devon District Council (EDDC), revealed there were more than 620 people on the waiting list in Sidmouth, including 171 children.
Compared to the rest of the district, Sidmouth had the third highest number of families on the list. This included around 41 single parents, 229 households of one or two people, 31 families of three, 32 families of four, 12 families of five, 11 families of six and one family of seven.
In Ottery St Mary, there are 375 people on this list and, of this, 251 are adults. This mean that 33 per cent of those waiting were children, leaving Ottery with the highest percentage of children waiting on the list compared with anywhere else in East Devon.
Overall there are 156 families waiting in Ottery – this includes 95 households with one or two people, 25 families of the three, 24 families of four, six families of five, four families of six and two families of seven.
Across East Devon, as of November 30, 2017, there were 3,143 families on the waiting list.
When looking at the numbers for the last three years, the statistics showed that the amount of people on the list had slowly been increasing.
In 2014/15, there were 2,297 households waiting and by March 2017 there were 3,361.
Although, as of November 30, the number of households on the waiting list had dropped by around 6.9 per cent.
An EDDC spokeswoman said the authority’s housing register was one of its barometers of housing need in the district.
She added: “We are constantly monitoring movements in the housing register  and trying to secure new affordable housing where  needs arise.”