Plans for Port Royal: 'the redundant Drill Hall site remains a more straightforward and viable opportunity for redevelopment and reuse'

The Herald gives a handy overview: 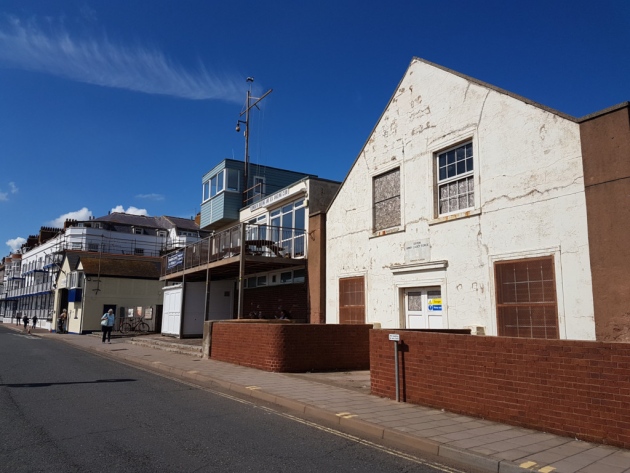 A report to East Devon District Council’s (EDDC) cabinet says a scoping exercise for the possible regeneration of the area revealed a flood risk and a covenant ‘impacting on parts of the potential development site’.
It says providing ‘affordable’ housing would make it unviable – and recommends against pursuing a mixed-use development of the site.
The report adds: “What came through very clearly from the consultation activities of both the scoping exercise and the Neighbourhood Plan was that the community would like to see some development in the area that provides a food and drink offer such as a restaurant/café or bar.
“What was also clear from consultation responses was the importance that people attached to the continuation of the lifeboat station, sailing club and its associated clubs and community uses/activities.
“This also reflects respondents’ views that water activities and maritime heritage should be respected.”
The report says a five-storey building was the only way to deliver a mixed-use redevelopment including the 30 homes allocated in the Local Plan – but there was ‘clearly a lack of support’ from the public for such a structure.
The report also says: “It is still important to find ways to make progress in improving what is still recognised to be an area of Sidmouth that detracts from the town’s otherwise attractive seafront.
“To this end, the redundant Drill Hall site remains a more straightforward and viable opportunity for redevelopment and reuse.
“To take this approach reflects the community’s views through consultation that we look after the existing and important active and community uses and find a new future for the vacant Drill Hall site that could create the sort of restaurant, bar or similar offer that people clearly wish to see in this spectacular location.”
Marketing a site such as the Drill Hall to the commercial sector would normally be a three-month process. However, the cabinet report recognises the community-based interest in the scoping study, and in this site in particular. So to encourage funding bids from commercial and non-commercial sources alike, the marketing period proposed will be doubled to six months.
The active uses at Port Royal, in particular the lifeboat and sailing clubs, will be unaffected by this proposed way forward and their premises will remain and not be part of a wider development plan.
The scoping exercise was a joint project between EDDC and Sidmouth Town Council, the major landowners.
They formed a project reference group with members of both councils with key stakeholders in the community such as Sidmouth Chamber of Commerce, Sid Vale Association and the Sid Valley Neighbourhood Plan steering group.
The scoping exercise considered a broad area but was only intended to identify which parts of it might be suitable for redevelopment, which for landscaping or reconfiguring and which might remain as they are.
The report says there is a flood risk especially related to land outside of the area allocated within the East Devon Local Plan.
In a press release, EDDC leader Councillor Paul Diviani said: “Sidmouth has waited long enough to see something happen on this site and both councils want to see improvement and new attractions for Sidmothians and visitors alike. Both councils have worked exceptionally well together on this project.”
Cllr Jeff Turner of Sidmouth Town Council said: “I believe the Sidmouth public will welcome the approach being recommended. It will provide opportunities for renewal of the Drill Hall site and, in particular, the possibility of our seafront benefitting from the new restaurant and bar attractions that emerged as popular choices in responses to the scoping study and the Sid Valley Neighbourhood Plan surveys. At the same time, both the lifeboat station and the sailing club and boat park will remain unaffected.”
In response, district councillor Cathy Gardner said: “The news that EDDC is proposing to drop development plans for Port Royal is very welcome.
“This decision will need to be confirmed by cabinet on February 7 and at full council on February 28.
“It remains to be seen whether residents in Sidmouth will want to put together a bid for the Drill Hall because at the moment we don’t know whether it is the freehold or the leasehold that will be sold or the price being sought.
“I hope people will take the chance to attend both the Sidmouth Town Council meeting on Monday February 5, and EDDC’s cabinet on February 7 to ask questions and hear the discussion.”