Although Totnes campaigned successfully to keep the chain out of town:
Costa forced out of picturesque Devon town which fought to defend its independent High Street | Daily Mail Online
How Totnes won fight to keep Costa out of town | Business | The Guardian
Might Costa’s withdrawal from Totnes signal the beginning of the end for our collective love affair with brands? » Transition Culture

So, yes, coffee chains are intensely 'political', as the satire and cult movie Fight Club back in 1999 pointed out: 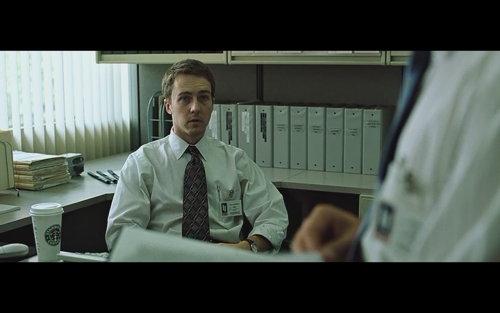 fightclubstarbucks.tumblr.com
There is a Starbucks cup visible in every scene of Fight Club | A movie Easter egg hunt: the best hidden messages & inside jokes in film - Film - Telegraph

The free market Foundation for Economic Education begs to differ:

Business Is Getting Too Politicized

A trend that follows growth in state power

Men co-operate through exchange of goods and services in organized markets, and such co-operation implies mutual gain. ... At base, political or collective action under the individualistic view of the State is much the same. Two or more individuals find it mutually advantageous to join forces to accomplish certain common purposes. In a very real sense, they "exchange" inputs in the securing of the commonly shared output.

But under Leviathan, politics is more the activity or the art of forcing some individuals' preferences on other citizens.
The Politicization of Business
In a recent issue, The Economist observes that business is becoming more political in America. Politicized businesses do not only feel obliged to take a stand on political issues, but they often want their preferences to be, in some way, forced upon members of society who don't share them. The magazine reports that chairman of Starbucks "champions the idea that firms should serve both their shareholders and a broader set of interests, including staff and civil society."
The politicization of businesses could correspond to a demand – real, money-backed demand – from their employees. The magazine reports that,

... many bosses feel that they have little choice but to respond to their staff, who are increasingly vocal on political and on cultural issues. ... 44% of millennial American employees say they would be more loyal to their company if their boss took a public position on a societal issue.

If the requirement is simply to fill the annual report or press releases with cheesy social nonsense, it may not cost anything to the company. But if it implies different production methods or hiring different employees – not hiring those who don't like the company's public positions, for example – there will be costs, just like there would be with the expression of political preferences by firm owners.
However, competition from non-politicized suppliers should prevent the politicized ones from charging more to cover their additional costs. Market competition would ensure that the politicization costs are paid by the firm itself and is limited to what employees or owners are willing to pay out of their own pockets. Because employees are as greedy as firm owners, internal demands for "societal" grandstanding will thus be limited.
This competitive discipline is a feature of the free-enterprise system, not a bug. That's why your fuel oil delivery man doesn't care about your race, sexual preferences, or political opinions; he just wants a check. That's why you normally don't have to recite a political profession of faith as a condition of employment; your employer just wants to hire your technical talents. That's why firms are not corporatist clubs or medieval guilds with customer satisfaction as a second thought.
People Are Ultimately Motivated By Self-Interest, Not Politics
Markets will converge to trade-offs that reconcile the preferences of all actors.
Demand for politicization could come from the consumers themselves. Some consumers may prefer to buy from firms who donate more to the Republicans or to the Democrats. An app called BuyPartisan provided that information simply by scanning product barcodes. However, the company's website shows no activity since 2015, just one year after its founding, and the app (still available at Apple's App Store) does not seem to work. This is not surprising, for the same reasons that consumer boycotts are rarely effective. The mass of ordinary people does not want to pay – in higher prices – for expressing their political opinions. As a woman in a Safeway supermarket told the Economist reporter, "If I want to eat gummy bears, I will eat gummy bears. I don't care if they're Republican." At least one-third of voters don't vote even if it is an inexpensive means of expression.

To the extent that some workers, firm owners, or consumers have a "taste for discrimination" (to borrow an expression from Gary Becker), firms will try to discriminate – say, by hiring only non-gun-owner types or by not selling cakes for certain occasions. But the competition of firms for customers and employees will oblige those who discriminate to support the cost of their discrimination, be it in higher prices or in reduced wages or profits. Markets will converge to trade-offs that reconcile the preferences of all actors, consumers, and producers (owners and employees). If you don't hire people on the basis of competence only or choose not to deal with certain people, you pay the price.
All this is related to the "social responsibility of business." Why can't business be socially responsible in the sense that they answer to society's demands? Why can't they pursue "the satisfaction of society," to quote a business association's report of the 1970s (Archie B. Carroll, "A History of Corporate Social Responsibility")?
Businesses cannot be responsive to society when "society" has different demands.


Except in the sense of answering the demands of individuals on the market, businesses cannot be responsive to society when "society" has different demands. And "society" does have different demands because it is made of individuals with different preferences and circumstances. The "societal goals" mentioned by The Economist are only the goals of certain individuals (except with regard to very abstract ideals such as peace and prosperity, which may be considered public goods desired by all).
Incidentally – or not so incidentally – "societal" is a strange word, and The Economist often relapses into the standard term "social," writing both "societal issues" and "social issues." The difference between the two words is not clear, except that "societal" looks more serious, scholarly, scientific. "Societal" may also relate to a desire to "modify the structure" of society, to engineer it. Or it may reflect a view of society as having primacy over individuals. I hope to come back on this issue in a future post, and any input would be appreciated.
Moral Grandstanding Leads to Strife
Pushing corporations into a uniform moral agenda – outside of a basic prohibition on fraud – may look good when the prevailing "social norms" are commendable, but many historical cases show the drawbacks of this approach.
Was it the firms' social responsibility to respect apartheid in South Africa or to discriminate against Jews in Nazi Germany? It is better for businesses to be free to serve any consumer whose demand they choose to respond to. Greed and competition will ensure that no market demand remains unmet.
Businesses are politicized because they want or need to please Leviathan.
Milton Friedman famously argued that "the social responsibility of business is to increase its profits." He pointed out that business executives have no mandate to "tax" consumers, employees, or shareholders, in order to finance the satisfaction of their own preferences about what social responsibility requires. We may add that businesses should, of course, be free to try other formulas, but at their own cost and without trying to impose what they prefer on others.

Politicization of businesses works in the opposite direction. It transforms the firm from a private association into a quasi-governmental organization. And it creates a vicious circle where politicization calls for more politicization, if only in self-defense, breeding conflict.
The general politicization of society is probably a major factor in business politicization. With growing state power and the idea that the best solution to every problem is a coercive, government-imposed solution, all social relations tend to become politicized, that is, enmeshed in the agendas of political authorities. Businesses are politicized because they want or need to please Leviathan.
Reprinted from the Library of Economics and Liberty
Business Is Getting Too Politicized - Foundation for Economic Education - Working for a free and prosperous world
.
.
.
Posted by Jeremy Woodward at 11:07