Here's a report of Tuesday's meeting from County Cllr Claire Wright, who called this meeting together with District Cllr Geoff Jung:

Friday, 12 January 2018 0 Comments by Claire
It was standing room only earlier this week, as over 100 Otterton residents flocked to the village hall to hear the latest situation on planning and to give their views on what might help the traffic situation in the village.
The meeting, which was organised by EDDC Cllr Geoff Jung and I, took place on Tuesday 9 January, was arranged by district councillor, Geoff Jung and I following a public meeting at Ladram Bay Holiday Park in November.  This was organised after feedback from residents to the parish council and I that residents were concerned about the relentless expansion of the caravan park and the levels and speed of traffic in the village. 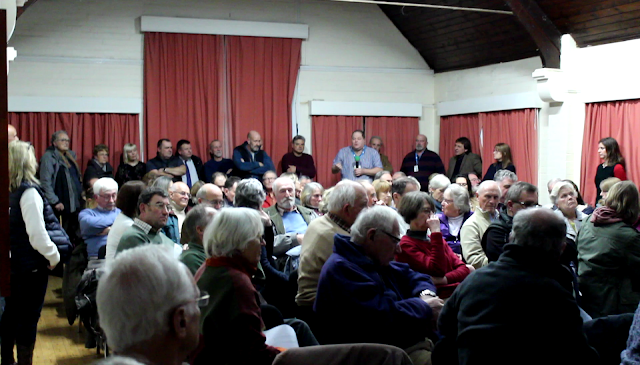 The meeting also attracted five members of the East Devon District Council planning committee, including chair, Cllr Mike Howe and chair of the EDDC scrutiny committee, Cllr Roger Giles.
PlanningCllr Geoff Jung gave a presentation about various planning issues affecting the village including the Greater Exeter Strategic Plan (more large-scale development in East Devon) and the Otterton Neighbourhood Plan. He also outlined the policies that need to form the basis of responding to a planning application.
To gasps from members of the public, Cllr Jung also showed a slide which showed how much larger the latest Ladram Bay development is, compared with the planning consent granted.  It was also built before the company - FWS Carter, had applied for planning consent.
Geoff said he was keen to hear from anyone who was aware of any unresolved planning matters at the complex.
Points and questions included:• Feeling of the planners in respect of the new development• Retrospective applications – how can they be prevented?• What is the situation with the original conditions of the planning consent, much of which hadn’t been met?• Comment about EDDC reluctance to serve enforcement notices, other authorities are keener to do so.
Cllr Howe, chair of the EDDC planning committee responded including:- all objections are considered, but these have to be relevant to planning policy, so lawful approval or refusal is possible.- retrospective applications are treated as any other application.- comments with traffic to Ladram Bay have to come from Devon Highways or other traffic experts.
Cllr Jung told the meeting that better planning controls were needed and that any development should improve or enhance the area.
Traffic Ian Birch of the Otterton traffic group presented his findings on two sessions of traffic monitoring during August and November.
The following findings emerged:
- traffic increases in the village by around 50 per cent overall in the summer, compared to winter- the traffic travelling up Ladram Road (no through road to Ladram Bay Holiday Park) is around 35 per cent of all traffic movements in the summer, however, this is less in the winter- traffic has increased in the village by around 15 per cent since 2013 (NB the last DCC 2013 survey was 24 hour and not 12 hour as carried out by residents last year, so one might expect the traffic increase would be higher in reality)
I asked people for their views on which issues they found most pressing in relation to highways. A number of people contributed and I asked how many people agreed that each issue raised was one of the most pressing issues, using a show of hands approach.
A really great and positive discussion took place and 45 minutes later I (and others) had a list of actions to meet with the local highways officer about.
These are:• Move 30mph signs to the edge of village at White Lodge, Ottery Street and to the entrance of Holiday camp in Ladram Road• Damage to hedgerows particularly in Ladram Road (To be pursued by Otterton Parish Council• SLOW signs in Ladram Road need repainting-    Try to get some enforcement of large vehicle size limit in the form of signage• Street parking , particularly Fore Street-    Residents parking scheme in the form of a car park on the Triangle (to be pursued in the first instance under the Neighbourhood Plan)• Highways should be commenting on planning applications• Further traffic surveys needed (to be undertaken by the traffic residents team)• DCC to also carry out further traffic surveys • A flashing speed sign to be provided as part of the 20mph zone.
I also reiterated my position on opposing further expansion of Ladram Bay Holiday Park on highways grounds.
A 20mph zone with a flashing speed sign (which I am aware has been attempted on previous occasions by the previous councillor, Christine Channon) was the intervention that the majority of residents present wished me to pursue.  I am happy to fund this from my locality budget.
I will be meeting a highways officer with members of the parish council soon to discuss things in more detail….
Pic:  Cllr Mike Howe, EDDC planning committee chair, addresses the meeting.