The campaign over Knowle has been going on for some time now - and back in September 2012 Private Eye's 'Nooks and Corners' column took it up: 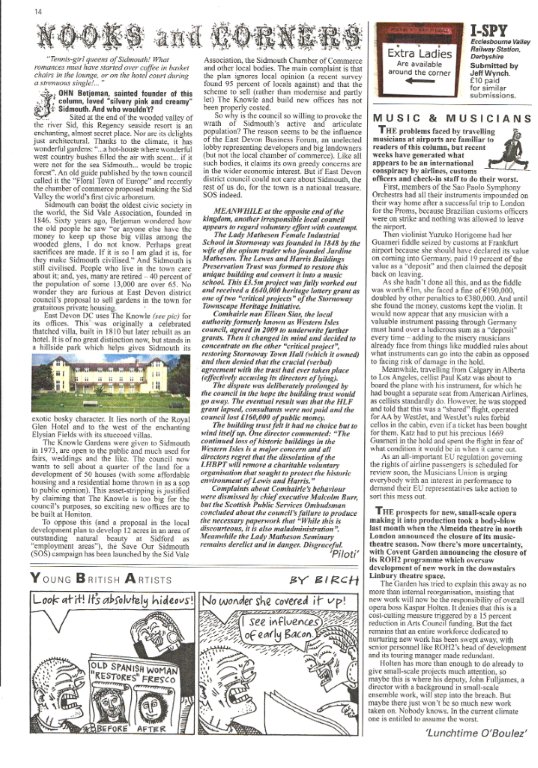 This is from the RIBA (the Royal Institute of British Architects):

The late architectural historian and critic Gavin Stamp was not known for being ambivalent. Penning the Nooks & Corners column for Private Eye, under the pseudonym ‘Piloti’, he gracefully thundered against architectural 'barbarism' in its many forms. So it’s only natural that Stamp would make a major contribution to one of the most enduring debates in British architecture: the wisdom – or folly – of designing in historical styles.
In fact, Stamp found the debate, as it most often plays out, rather wearying. In his 2004 essay for Apollo magazine ‘The Curse of Palladio’, he decried the 'tiresomely polarised' division of architectural taste into a preference for flat roofs (Modernists) versus columns (Classicists). During his prolific career, Stamp championed and criticised buildings of both schools. His point was that obsession with style distracts from the more important task of designing good buildings. Twenty years earlier in a review of John Martin Robinson’s The Latest Country Houses for the Spectator, he had remarked pointedly:
'Had more architects been less obsessed with the vision of Le Corbusier and more interested in doing what ordinary people actually want, then the standard of design of the 'Regency Maisonette' and the other suburban houses with coach lamps and Georgian front doors might not be so abysmally low.'
Stamp certainly had little time for 'crude' interpretations of historical styles. Clumsy use of the classical orders, ineptly integrated modern services and pedantic adherence to arbitrary traditional detailing were unforgivable. But he found things to praise in many of the traditionalist projects rejected by popular opinion. His writings cite Poundbury for its considered town planning, Kensington Library for its careful detail and Wood Street Police Station for its 'miniature skyscraper', among Neo-Georgian designs with merits to offer.

For many of the flat roof brigade, Neo-Georgian architecture represents an uncomfortable nostalgia for a less egalitarian age, especially when pitched against the utilitarian angles of Modernism. Somewhat conversely, Stamp associated uncritical disdain for Georgian-style buildings as a kind of snobbery; a disregard of the architectural establishment for the taste of the 'ordinary people' who must live with their creations. Concluding the 1984 Spectator book review, Stamp declared:
'They may be boring, unoriginal, gauche, but the fact is clear that, in the mid-20th century, the unfettered Spirit of the Age preferred Neo-Georgian to live in.'
Writing more recently for Apollo in the 2008 article, ‘Post-Haste to Closure’, Stamp went so far as to define Neo-Georgian as England’s 'true modern national style of the 20th Century'. During the first half of the century the style was conjured up to construct everything from post boxes to air force bases. Like it or not, Stamp argued, the national character of our architecture owes much to the understated gentility of the Georgian style.