Brexit: and reaction to the latest plans for farming >>> "We're very proud of our high standards of environmental protection, of welfare, in the UK and we want those to be respected in any trade negotiation and we do not want to see cheaper food produced to lower standards."

The latest map for post-Brexit farming is being put forward.

This is the take from the Express:


GENETICALLY modified animals could be sold in the UK after Brexit as Britain takes advantage of new technologies after a break from European Union red tape. 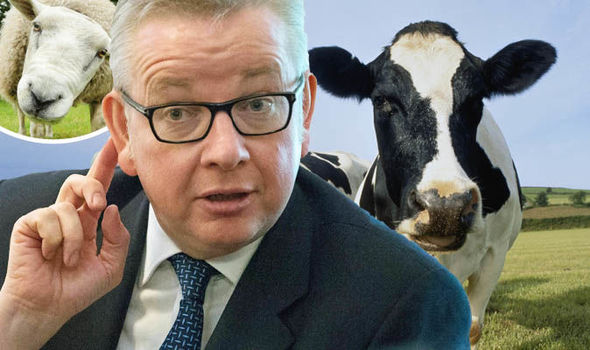 Michael Gove said Britain’s exit from the EU will coincide with “bio-tech changes” on the horizon which will “challenge us to think about the future”. And the Environment Secretary added that gene editing could be used to create “more valuable livestock”.

But he also admitted there were “political and moral questions” about the controversial technology, and the science is still in its “infancy”. He said: “Gene editing technology could help us to remove vulnerabilities to illness, develop higher yielding crops or more valuable livestock, indeed potentially even allow mankind to conquer the diseases to which we are vulnerable.

Meanwhile, the Environment Secretary has had other things to say about the future of food, as reported in the Independent:

The American government provoked anger after it urged Britain to increase post-Brexit trade by abandoning European Union regulations on food and farming standards.

Ted McKinney, under-secretary for trade at the US Department of Agriculture, also dismissed fears that a future trade agreement between the two countries would lead to imports of chicken washed in chlorine.

But critics insisted that quality controls on food should not be compromised as the price for clinching the deal. The row was triggered when Mr McKinney argued that trade opportunities would be boosted by dropping some EU rules.

He said: “We hope the UK will look for its own food standards, environmental safety protocols. We find the EU a very difficult place to do business and so we hope that as part of Brexit, the reset button can at least be considered.”

The BBC looks at the money promised - plus the reaction from farmers:

Plans for the way farming subsidies will be dealt with after Brexit have been set out by Michael Gove. Farmers will receive payments for "public goods", such as access to the countryside and planting meadows. The environment secretary told farmers the government would guarantee subsidies at the current EU level until the 2022 election. There would then be a "transitional period" in England.

The National Farmers Union said it was time for "a new deal" for the UK.

The environment secretary said he was "confident" about the future of British farming and that Brexit would allow the UK to "leverage" the advantages of Britain producing "the best food in the world" and "some of the most innovative farmers in the world". New trade deals with other countries outside the EU would provide new markets for the "superb food" Britain's farmers produce, Mr Gove said.

Minette Batters, deputy president of the National Farmers Union, welcomed incentives to protect the environment but said her key concern was over future trade deals. She said: "We're very proud of our high standards of environmental protection, of welfare, in the UK and we want those to be respected in any trade negotiation and we do not want to see cheaper food produced to lower standards."