The palm oil in your biofuel

But we are using tonnes of it as a fuel:
Palm oil is cheap, but it’s also an eco-disaster | This Week In Asia | South China Morning Post

But there are several reasons for the ban.

And it's about deforestation:

A new report projects the global demand for palm oil-based biofuel by 2030 will be six times higher than today if existing and proposed policies in Indonesia, China and the aviation industry hold.

That surge in demand could result in the clearing of 45,000 square kilometers (17,374 square miles) of forest in Indonesia and Malaysia, the world’s biggest palm oil producers, and the release of an additional 7 billion tons of CO2 emissions a year — higher than current annual emissions by the U.S.

That impact could be tempered to some degree by the European Union, which plans to phase out all use of palm oil in its biofuel over the next three years, citing environmental concerns.

JAKARTA — Global demand for biofuels containing palm oil looks set to grow sixfold by 2030, potentially driving the destruction of Southeast Asian rainforests the size of the Netherlands, a new report warns. Biofuel policies in place or proposed by Indonesia and China, as well as the aviation industry, could push their consumption alone to 45.6 million tons by 2030, according to the report commissioned by Rainforest Foundation Norway.

“As we approach 2020, many biofuel policies are being reassessed and renegotiated,” report author Chris Malins, a biofuels policy expert, said in an email. “So this seemed the right time to look at what the best and worst scenarios were for the impact of biofuel policy on deforestation in Southeast Asia for the next decade.” 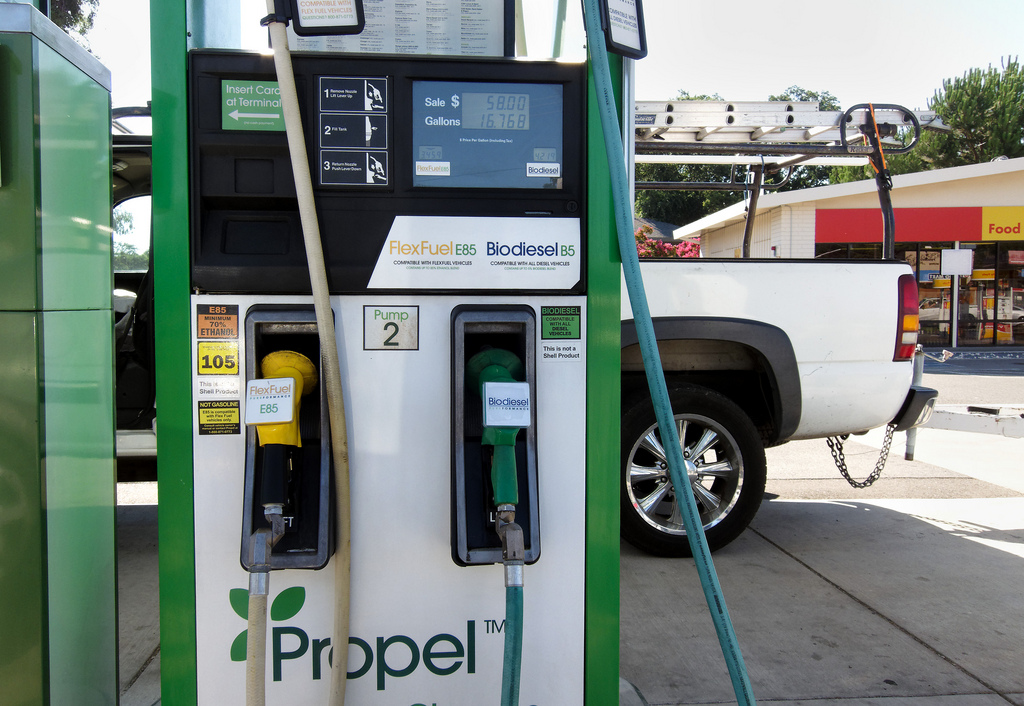 Indonesia, the world’s biggest producer of palm oil, is currently pushing for increased domestic consumption of biodiesel that contains the vegetable oil. The policy calls for a minimum bio, or palm oil, content of 30 percent in all diesel sold in the country by 2020, up from the current requirement of 20 percent. This target is one of the most ambitious biodiesel-blending targets in the world. If achieved, Indonesia’s annual biodiesel consumption would rise to 18.6 million tons.

China, meanwhile, has begun discussions with Indonesia and Malaysia, the world’s second-biggest palm oil producer, to boost its own blending target to a minimum of 5 percent palm oil in biodiesel. That would increase China’s palm-based biodiesel consumption to 9 million tons a year.

Another key driver of the demand for palm-based biofuels will come from the aviation industry. The UN’s International Civil Aviation Authority (ICAO) has proposed increasing the use of biofuels for passenger planes, aiming for half of jet fuel to come from biofuels by 2050. This scenario could potentially require 18 million tons of palm-based aviation fuel by 2030.

“The report shows that the aviation sector and Indonesia may become the largest consumers of palm oil-based biofuels in 2030,” Nils Hermann Ranum, the campaign and policy chief at Rainforest Foundation Norway, told Mongabay. 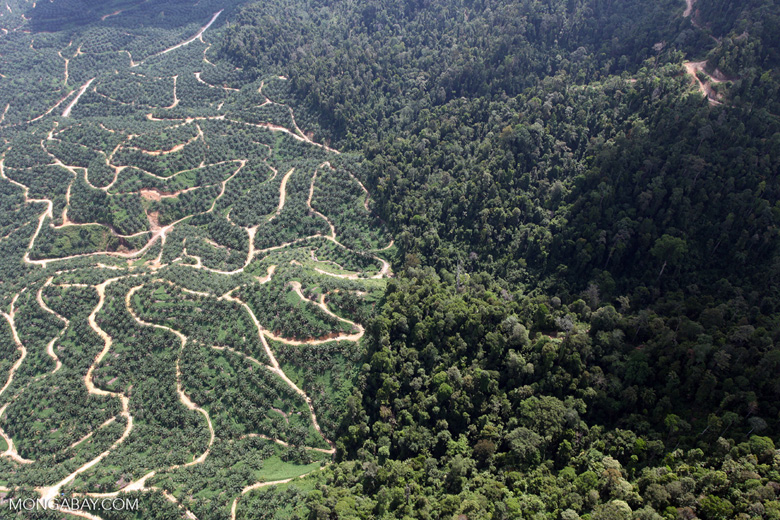 An oil palm plantation adjacent to tropical forest in Borneo, where a “triple hotspot for biodiversity, carbon and threat, [means] there is a compelling global case for prioritzing their conservation,” the scientists write. Photo by Rhett A. Butler7 billion tons of emissions

Assuming that Indonesia, China and the aviation industry meet stick with and achieve their stated biofuel policies, demand for palm oil for use in biofuels by 2030 could be more than six times higher than today — amounting to 67 million tons. This would account for half of global demand for palm oil, and would exceed the current global production of the commodity, at around 65 million tons annually.

Production has remained largely flat over the last 20 years, which means the surge in demand presaged by the policies in Indonesia, China and the aviation sector will call for a massive expansion of existing palm plantations. In Indonesia and Malaysia, which produce 85 percent of the world’s palm oil, this would translate into a sharp escalation of already alarming levels of deforestation. (In Indonesia alone, 40 percent of the deforestation that occurred between 1998 and 2008 can be attributed to palm oil production, according to a 2013 technical study funded by the European Commission.)

Barring a massive increase in the average palm oil yields, meeting the global demand would result in the loss of 45,000 square kilometers (17,374 square miles) of forests, an area the size of the Netherlands, by 2030. A loss of forests that size would result in 7 billion tons of carbon dioxide emissions over the next two decades — more than the total annual emissions of the United States. 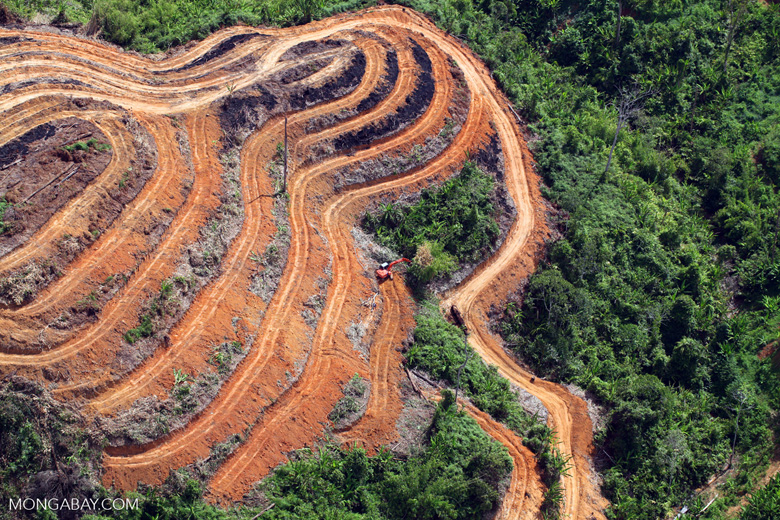 Deforestation for oil palm in Malaysia’s Sabah State. Photo by Rhett A. Butler/Mongabay.

While the environmental prospects look bleak, the impact could be tempered by the European Union’s policy to go in the opposite direction and phase out palm oil in biofuels. The EU is currently the world’s second-biggest importer of palm oil, behind only India, and is in the process of adopting a revised Renewable Energy Directive to take effect from 2020-2030.

“The purpose of the EU’s renewable energy policy is to reduce greenhouse gas emissions, and allowing palm oil-based fuels would be a direct contradiction to that goal,” Ranum said.

To that end, the European Parliament last week voted in favor of targets to cap crop-based biofuels, following the parliament’s overwhelming decision last year to ban the use of vegetable oils in biofuels. The amendments will now go to the European Commission and member states before they become law. The amendments call for a reduction to zero of “the contribution from biofuels and bioliquids produced from palm oil” by 2021.

Ranum and Malins welcomed the move, saying that it would have a significant impact on global demand. Their report found that without strong measures to avoid palm oil use in biofuels, EU biofuel consumption in 2030 could reach 7.3 million tons, up from the current 3 million tons.

An immediate reform of EU biofuel policy could reduce global palm oil demand by 3 million tons, Malins said. “That would take a great deal of pressure off the global market, and could allow 3,000 square kilometers [1,158 square miles] of deforestation to be avoided,” he said.

Ranum noted, however, that the amendments still needed to be ratified. “It’s important to bear in mind that while the European Parliament has suggested to exclude palm oil-based biofuels from its renewable energy policy, the EU member states, through the EU Council, have come to an opposite position,” he said. “If the EU decides to avoid palm oil biodiesel, that would be proof that the EU takes the climate effect of its policies seriously.”

Last week’s vote triggered a backlash from Indonesia and Malaysia, who called it unfair and misguided. Officials from both countries trotted out the industry-sanctioned argument that other types of vegetable oils used in biofuels also required clearing far greater plots of land for an equivalent yield. The Indonesian government also said it had taken steps to address the environmental impact of the palm oil industry.

Malins acknowledged that while such efforts had been made, they had been far from effective. “Sadly, there’s also no question that these measures have failed to date to prevent the most damaging practices of peat drainage and forest clearance,” he said. “A more sustainable palm oil industry is vital to continue to supply vegetable oil for food and oleochemicals, but it would be grossly irresponsible to continue using palm oil for biofuel while peat and forest clearance continue.”