Community energy schemes to lose tax relief ................... incentives which have 'propelled the transformation of the German energy market'

The West Sussex village of Balcombe is famous for opposing fracking on its doorstep, if not under its houses - and for its community energy projects:
Futures Forum: Balcombe: making a community self-sufficient in electricity

They have just finished their first stage: 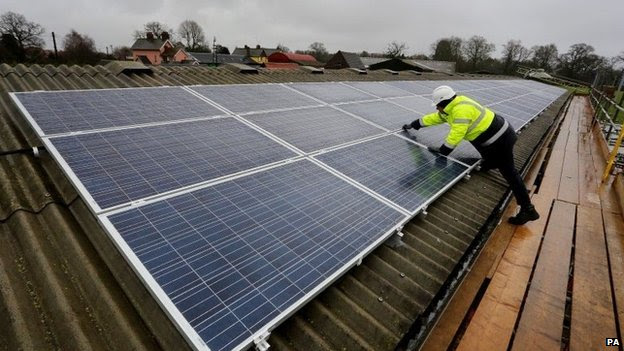 Balcombe is getting its first set of solar panels! | 10:10 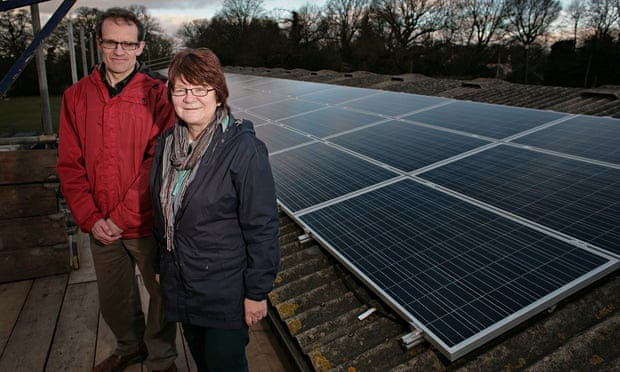 REPOWERBalcombe group members Tom Parker and Jackie Emery next to the solar panels on the roof of Grange Farm cow shed. Photograph: Martin Godwin for the Guardian

The small, picturesque village of Balcombe in west Sussex became synonymous with fracking – and the opposition to it – nearly two years ago when plans emerged to test local land for oil drilling. That summer, the Balcombe protestspropelled the issue of shale gas and oil to the forefront of public debate, sparking demonstrations elsewhere and a mass petition to Westminster.
Now the focus of protests has moved elsewhere, but the villagers are continuing their anti-fracking revolution in the form of a new, carbon-free, source of energy for the area. An array of solar panels, paid for by a fundraising drive among residents, were switched on at a nearby farm this week, giving villagers an alternative vision of clean power...
Balcombe balks at tax changes for community green-energy projects | Environment | The Guardian 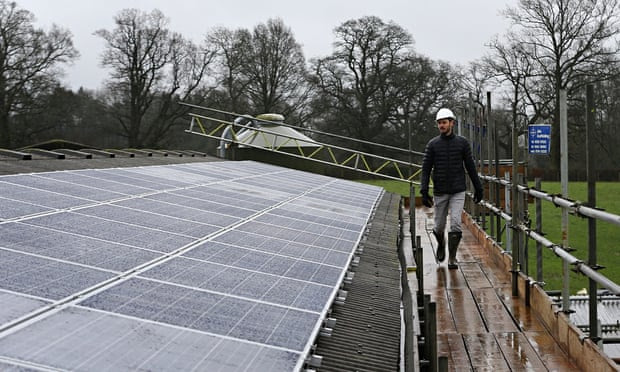 The new energy co-op REPOWERBalcombe has installed 69 solar panels on a cow-shed near Balcombe in West Sussex. Photograph: Gareth Fuller/PA


Community energy schemes popular with ethical investors have been thrown into chaos, with many of the projects now engaged in a race against time to beat the withdrawal of generous tax reliefs from April.
Locally run green energy schemes have been one of the ethical investment success stories of recent years, allowing people to put money into projects and earn returns that can sometimes be as high as 10%-plus a year.
But many may now struggle to get off the ground as a result of tax changes announced by the government – and even if they do succeed in starting up, investors may find that the headline rates on offer are a lot less attractive.
Over the years Guardian Money has featured a number of “community co-operatives” that allow people to invest perhaps a few hundred or thousand pounds and hopefully earn a decent return. Many have been set up to generate clean electricity using wind turbines, solar panels or hydroelectric plants.
Some of the energy schemes now open for investment are offering returns as high as 13% a year, courtesy of the generous tax breaks currently available. But fears have been expressed that a proposed shake-up of the rules could push returns down to, at most, 4.5% or so. That is more than you would get from a traditional savings account, but may not be enough to compensate for the risks and other downsides associated with this type of investment.
More to the point, the changes could kill some schemes stone dead.
Leo Murray, head of strategy at 10:10, a climate change campaign group, told Guardian Money that energy co-ops all over the country are in a “race against time” to get their share offer documents published and open for investment as soon as possible.
So what has prompted this “crisis” (Murray’s word) that could threaten the existence of the community energy sector?
Advertisement
The answer: a number of things.The big blow came in the autumn statement in December, when the government announced that from April this year community energy projects will no longer be eligible for Enterprise Investment Scheme (EIS) or Seed Enterprise Investment Scheme (SEIS) tax relief. These two reliefs have played a crucial role in encouraging people to back green energy schemes because they allow investors to reclaim income tax on their investment at the rate of either 30% or 50% respectively. That’s a big benefit that comes on top of the predicted interest rate that investors will receive.
Take the example of Chase Community Solar, an energy project based in the Cannock Chase district of Staffordshire, which aims to deliver free solar electricity to council tenants by installing solar panels on their bungalows, and which is open for investment until 13 February.
Investors can pick up returns of up to 13.4% a year from the scheme, which makes use of both reliefs, but under the proposed new regime the returns would have been considerably lower.
What the government has said is that a new tax break, Social Investment Tax Relief (SITR), which is almost identical to EIS and has been set at 30%, will be expanded to include community energy. But, crucially, co-ops – which make up the majority of the sector – won’t be eligible to receive this relief. Murray says the Treasury wants to make SITR available only to a particular type of organisation, similar to a co-op, known as a community benefit society (or “bencom”). The big sticking point, he adds, is whether bencoms will be allowed to offer decent enough rates of return to attract investors. The FCA is insisting bencoms should be “charitable or philanthropic”, and appears to be threatening to restrict the returns to investors to more like those offered by traditional high street savings accounts.
Mike Kinghan, chair of Chase Community Solar, which is a bencom, says that if the FCA does go down this route, that might suggest schemes would only be able to offer returns, including the tax relief, of perhaps 4% to 4.5%. “I don’t think that’s going to be enough. I think 5% before tax relief is probably the minimum [return] that’s needed.” 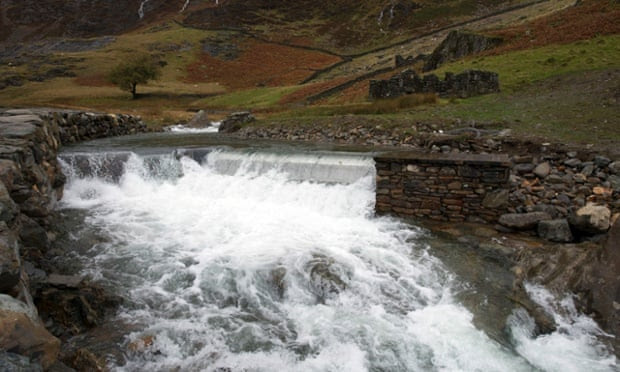 The National Trust installed a hydro power turbine on the river at Hafod y Llan farm in Snowdonia in 2014. Photograph: Keith Jones/PA


There’s yet another issue for the sector to contend with: as the Guardian reported in August, the FCA - which registers new co-operatives - has been blocking new energy co-op applications. It is said to have taken the view that co-ops must be able to trade directly with their members - something that is difficult, if not impossible, for energy co-ops because they are usually too small to apply for licenses that would mean they could sell electricity from, say, a wind turbine directly to members. Instead, they usually sell to the national grid and then decide what to do with the profits - ie, plough them back into the the community and/or pay a return to investors. Murray is involved with an energy co-op called REPOWERBalcombe, based in the West Sussex village of Balcombe, which has just installed its first solar panels on the roof of a local cowshed. It hopes to raise £250,000 to finance the next stage of the venture and was planning to launch a share issue at Easter, but has been forced to look at bringing this forward because of the changes to tax relief taking effect from April. “From April, co-ops like REPOWERBalcombe will no longer be able to receive EIS or SEIS tax relief for investors in community shares,” says Murray. Because this will deal a major blow to the financing of such projects, REPOWERBalcombe is now “scrambling” to get the share offer out before the deadline, he adds.
Philip Wolfe, chairman of Community Energy England, a not-for-profit organisation set up last May to provide a voice for the sector, says he can understand that the government would want to clamp down on schemes that are “effectively pretending they are social enterprises when they are really not much more than a commercial investment tool”. But the vast majority of community energy projects don’t fall into that category, he adds. Wolfe says that with many of the energy co-ops, the fact they were eligible for EIS and sometimes SEIS relief “made the modest returns they were offering acceptable to enough people to make them a reality … If you don’t raise enough money, you can’t do the project.”
There are plenty of other community energy schemes currently open for investment. They include a £150,000 share offer to repay loans used to finance a wind turbine near Redruth, Cornwall, offering projected returns of 3-5% a year, plus EIS tax relief. The offer has been launched by a community benefit society called Ecodynamic and closes on 31 March. Meanwhile, in the Scottish Highlands a bencom called Sunart Community Renewables aims to raise £850,000 to fund a hydroelectric scheme in Strontian and expects to pay 4% a year, plus EIS relief. The offer closes on 28 February.

By changing the rules, this government has sabotaged the promise of a UK community energy revolution and secured the dominance of the big six energy companies 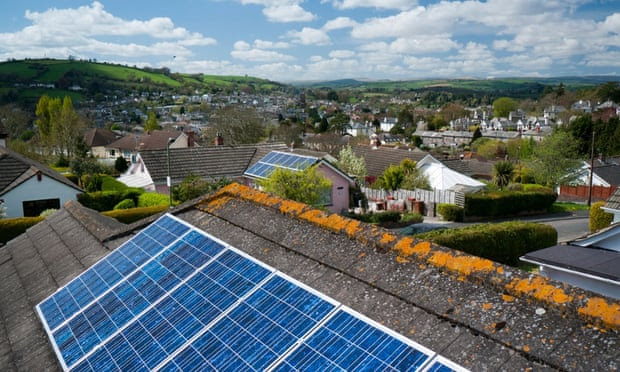 
You would think the government had invented community. When David Cameron became prime minister, he announced that “my great passion is building the ‘big society’ ... We need to create communities with oomph – neighbourhoods who are in charge of their own destiny, who feel if they club together and get involved they can shape the world around them.”
Since then, ministers have scarcely been able to finish a sentence without using the word community. But their commitment turns out to be as hollow as the other famous claim Cameron made in his ‘big society’ speech: “we’re all in this together”.
There are, it seems, just two levels of organisation that the government regards as valid: individual households and big corporations. Anything in between is either a threat or an irrelevance. For all the grand announcements about community rights and community action, there is still no such thing as society. Let me show you what I mean.
In 2013, the secretary of state for energy and climate change, Ed Davey, announced “a community energy revolution”. Under the unlikely slogan “Power to the people”, last year the government explained what this meant:

Local communities will be able to take control of their energy bills and help transform the energy system ... In the future, the generation of electricity by communities themselves could put pressure on energy suppliers to drive down prices, creating warmer homes, cutting carbon emissions and diversifying the UK’s energy mix.