It also has an industrial estate near Woodbury Common - which was the subject of investigations earlier in the summer: 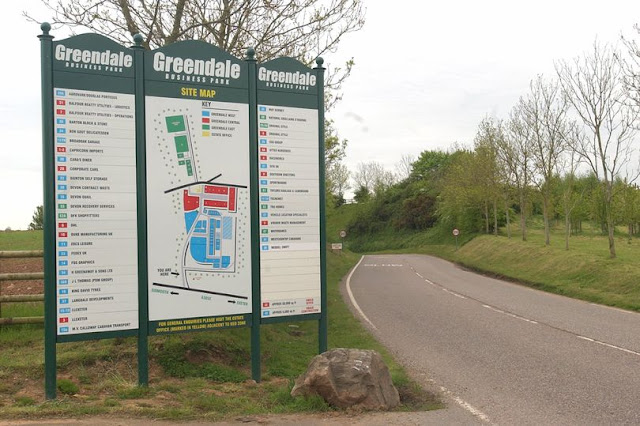 This has also been the subject of inquiries by the planning authorities;
Futures Forum: Pressures to expand the Greendale and Hill Barton Business Parks >>> deadline to comment: Friday 2nd February

On the one hand, there is the promise of 'jobs':
Major expansion plans to transform popular farm shop and create 30 new jobs - Devon Live

On the other, there are planning rules:

The High Court has ordered the owners of a business park just outside Exeter to remove an ‘unauthorised extension’ which was illegally built into the countryside.

East Devon District Council has successfully fought a planning appeal by Greendale Business Park, on the A3052 just outside Exeter, against an enforcement notice requiring the park owners to remove an unauthorised extension.

The business park has been extended into the countryside after four fenced compounds were created, concreted over and were used variously for the storage of mobile homes, shipping containers, portakabins and, in the case of one of the compounds, had two permanent buildings on it.

Following the latest High Court hearing, it now means that the owners of Greendale Business Park, FWS Carter and Sons, must comply with the enforcement notice, remove the extension and return the land to countryside within six months of the court’s decision.

Cllr Mike Howe, chairman of the district council’s development management committee, said that the council will work with the park owners to find alternative locations for businesses on the unauthorised site affected by the enforcement notice.

He added: “This case demonstrates that we take unauthorised development very seriously and as a local authority are charged with using our enforcement powers to ensure that development carried out without planning permission is removed.

“We will work hard with the site owners to find alternative locations for the businesses currently operating from this unauthorised area. We’re pleased that the courts have now stopped this appeal from proceeding any further and the enforcement notice to get these works removed has now taken effect.”

The Greendale Business Park from the air

The works were all carried out without planning permission and a subsequent planning application was refused due to the harm that the extension caused to the countryside and the visual amenity of the area.

Following the refusal of planning permission, the council served an enforcement notice on the owners requiring the uses to cease and the land returned to its former condition including the removal of temporary and permanent buildings, fencing and hard surfacing.

Although the owners appealed against the enforcement notice, a planning inspector ruled in favour of the council and directed the owners to stop using the land in the way it was and return it to its former condition within six months.

The owners subsequently appealed against the decision in the High Court arguing that the planning inspector had made an error in law by concluding that the East Devon Local Plan specifically covered the issue of development at Greendale Business Park.

However, the owners have just won a retrospective planning application:

“FWS Carter and Sons were successful in obtaining planning permission for 2 further agricultural buildings at Hogsbrook Farm, next to their Business Park at Woodbury Salterton.

Although the Planning Committee were reluctant to grant planning permission for these 2 buildings only 18 months after a planning inspector overturned the committee’s decision to refuse 2 similar units being changed from agricultural use to industrial, because it was claimed they were redundant for agricultural and their remaining cattle sheds a facilities were more than adequate for their farming needs for the foreseeable future.

Yet within a short space of time after the previous units were converted to Industrial use the company applied for these 2 further agricultural buildings due to the alleged expansion to their farm business.

It was pointed out that there have now been many similar applications at Greendale and Hogsbrook Farm where agricultural building have changed to industrial or business use due to the company claiming that they were no longer needed for their agriculture needs.

Committee members were concerned that although it seemed obvious that FWS Carter and Sons are “cynically abusing” the planning system and conditions attached to previous applications which had tried to control these changes, that have by default allowed the Business Park to expand considerably and in an uncontrolled manner.

The planning officer stated that the Government and East Devon planning regulations could unfortunately not prevent these applications being approved, as the applicant had submitted an agricultural justification statement, and the applications complied with all the legal requirements, but he agreed to recommend a legal clause that should prevent the applicant from converting these further 2 units to industrial or business use in the future.

District Councillor Geoff Jung a planning committee member and the local Councillor for Raleigh Ward which includes Woodbury Salterton said after the meeting.

“There are now more than a dozen massive Industrial units at Greendale and Hogsbrook Farm which were all retrospectively changed in use and later granted permission for industrial use.”

“But we are also the custodians of our countryside which needs protection from uncontrolled development.”

“It very disappointing to the local community that a local developer and landowner, FWS Carter and Sons, have been successful in working the planning system.”