Will falling house prices be a good thing... or not?

As Brexit looms, there are fears/hopes that house prices will crumble:
Futures Forum: Brexit: and a collapse in house prices

If a house price crash sounds like good news, you should think again

Dire warnings of a no-deal Brexit could be seen as helpful to first-time buyers. But a downturn would hurt those who can least afford it the most 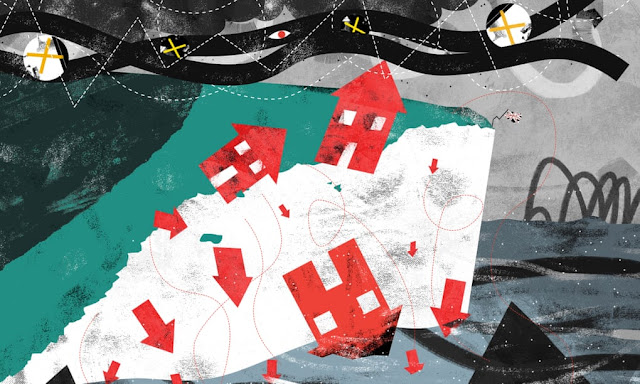 House prices are falling. Those words feel like the first fat drops of rain, falling after a long summer drought, bringing not so much sadness as sweet relief. The housing market has been running far too hot for too long. Lives and prospects are parched. A change in the weather is surely just what everyone needed.
Besides, the 1.7% fall in average house prices recorded by property website Rightmove this month sounds like more of a light shower than a monsoon, especially as it mainly affected London and the commuter hotspots of the south-east. If nervousness about what’s going to happen after Brexit is forcing greedy homeowners to be a bit more realistic, or developers to think twice about converting city landmarks into obscenely expensive flats for the super-rich, then arguably that’s all to the good.
Few tears will have been shed at recent reports that flats in London’s Centre Point building, where a one-bed goes for a genuinely surreal £1.8m, aren’t shifting. And who wouldn’t be thrilled to see the back of sealed bids? Even the Bank of England’s suggestion this week that house prices could fall by up to 30% in the event of a chaotic no-deal Brexit will have sounded to some frustrated renters like more of a silver lining than a cloud. There is a horribly powerful lure in the idea of just blowing it all up and starting again, shaking the property-rich out of their complacency and putting power back in the hands of the priced-out. But while a crash may be an opportunity for a lucky few, at least as long as they can keep their jobs long enough to get a mortgage, it is very far from being the answer.
An analysis released this week by the property firm Savills spelled out just one of the reasons why. A property downturn could, it estimated, reduce the number of affordable homes being built by a quarter. When prices fall, developers’ profits shrink and they retreat from the market. And when developers stop building, promises to stop future buyers being locked out of the market by building 300,000 new homes a year aren’t worth the manifestos they were written on.
What was striking about the former cabinet minister Oliver Letwin’s recent report on land banking – the much-hyped practice of developers buying up land and sitting on it while it rises in value – was that he found precious little evidence of it happening. What he did find was developers building on their sites painfully slowly, over the course of several years, because they won’t do anything that causes neighbourhood property prices to fall. A glut of for-sale boards going up all at once means buyers can take their pick and haggle hard over prices. This may be exactly what first-time buyers need but it’s what developers are primed to avoid.
The problem with relying on the market to provide is that the market works to ration the one thing voters hope mass housebuilding programmes will deliver. And that’s in good times; imagine what happens when everyone is scrabbling frantically to protect their investment in a downturn.
The most dangerous delusion of all, however, is that it doesn’t matter if this mild correction to overheated house prices turns into a full-blown crash, because those who’d suffer most are comfortable middle-aged owner-occupiers who can afford the hit. It’s true that my generation of homeowners, who bought years ago when that was still vaguely possible and have mostly built up a reasonable cushion of equity, are the ones best placed to be philosophical about losing what was only ever paper money. However much we grumble, if we need to move then at least whatever we’re buying will also have slumped in value.


But what that means is that the middle-aged and comfortable should be able to ride things out relatively unscathed. The biggest losers would be elderly people selling their homes to pay for social care, and millennials who have only just bought. It’s the last poor suckers to be drawn into a pyramid scheme who tend to lose the most money, and if the house price tide does go out those who jumped in at what turns out to have been the peak of the market risk being stranded. (Those using help-to-buy loans may be particularly vulnerable, even though they don’t have to repay as much of their loan if their house falls in value. There are growing concerns that in some places developers have artificially inflated prices for bog-standard new homes and counted on the state-funded subsidy to soak up the difference.)
It’s the youngest and the most painfully overstretched buyers who risk being trapped in negative equity, with loans worth more than their homes, or locked out of cheap mortgage rates.
A smart government would be thinking now about how to support them if the worst happens. For, crucially, the pain won’t be equally distributed. If average house prices fell now by as much as they did during the last crash, according to analysis by Computershare Loan Services, the number of households stuck in negative equity would rise by 2.7% in London but by 6.1% in Wales and 6.8% in the north.
A little rain after a drought is a welcome thing, but a downpour on ground that’s already heavily waterlogged is dangerously likely to cause a flood. There are pockets of the north-east, in particular, where prices have barely recovered from the last crash, and it would take very little to wash some homeowners over the edge.
Yet the risk is that arguments like these are increasingly doomed to fall on deaf ears. Nobody who is spending their 30s pacing around a rented rabbit hutch wants to hear a lecture about how a slow, steady, measured correction to house prices over several years would be safer for all concerned than the kind of sudden lurching drop middle England would feel in the pit of its stomach, even if it does happen to be true. Too many people have for too long been fobbed off either with patronising nonsense about how they could probably afford to buy if they didn’t spend so much on avocado toast, or with grand political promises of jam tomorrow that never quite seem to be delivered.
We reap as a society what we have sown, and it would be wholly understandable if those priced out of the market had reached the point of no return; if, like leave voters who shrugged off warnings that Brexit would make them poorer because for years that’s what successive governments were doing anyway, they were now actively praying for a crash. The cruel irony is that, as with Brexit, it might only end up hurting those who can least afford it.
• Gaby Hinsliff is a Guardian columnist

If a house price crash sounds like good news, you should think again | Gaby Hinsliff | Opinion | The Guardian
.
.
.
Posted by Jeremy Woodward at 16:11

Thanks for your valuable information. It really gives me an insight on this topic. I'll visit here again for more information.