Can you help with a vote?


Exeter Pound project want to make an app and a map to guide visitors and residents to their independent local shops and businesses.  This is one of the ways the local currency will support local businesses, employment and sustainability.  Bit by bit we want to create an economy that can support us through world recessions & crises and that's fair to people and planet.  It's a big ask and our next step in that direction is our bid to Aviva Community Fund for £5,000 to make the map and the app.

Please support us by voting for our project at
https://community-fund.aviva.co.uk/voting/Project/View/2559

Or go to https://community-fund.aviva.co.uk/cms/ and search for Exeter Pound
We have 600 odd votes and need to get to the 000's in the next 3 days. Each person gets 10 votes! I hate beauty contests - but it would be so marvellous to win one of the awards.

Here's a nice overview so far: 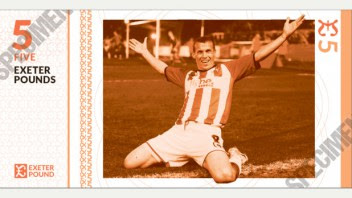 Local currencies are being developed in locations around the world. An inspiring, effective and influential part of REconomy work within communities. Exeter, in the UK, is due to launch later this year. Rob Hopkins visited the team to hear more. 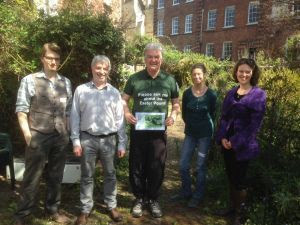 A couple of weeks I took the short train ride to Exeter to meet Ian, Melanie, Adam, Martin and Gill, the group working hard to make the Exeter Pound a reality. With their launch set for September 1st I wanted to find out how’s it going.  How did the idea come about? How did it step up to become a reality?
Did you know that a successful launch of the Exeter Pound is Exeter City Council’s second highest economic priority? Or what links a group of black gospel singers who toured England in the early 1800s, the Rugby World Cup and the Exeter Pound £15 note?  Or the role New Economics Foundation’s ‘Clone Town Britain’ study had in inspiring the Pound?  All is revealed in our “everything-you-could-ever-want-to-know-about-the-Exeter-Pound” podcast.
You can see the £5 note above … and here’s the special limited edition £15 note … 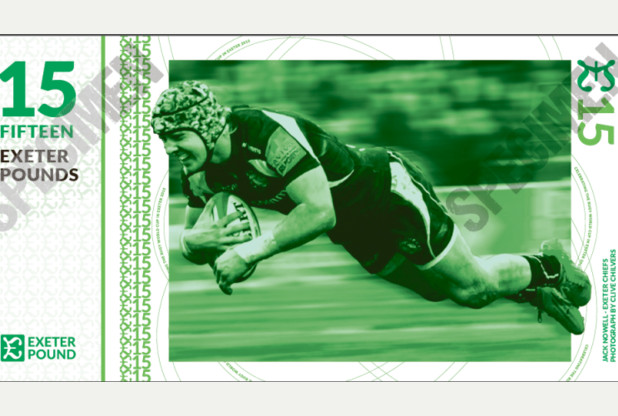 Keep up with developments at www.exeterpound.org.uk.
Originally published on the Transition Network website May 5, 2015, by Rob Hopkins.
The “Everything-you-could-ever-want-to-know-about-the-Exeter-Pound” Podcast : REconomy