Knowle relocation project: "Progress reports to date must be released"

The District Council has promised to act on the decision by the Information Tribunal:
Futures Forum: Knowle relocation project: "We will be introducing new steps to improve transparency."

In which case, it will be interesting to follow the District Council's response to other pertinent Freedom of Information requests - as from the chair of Save Our Sidmouth:

Dear East Devon District Council,I asked for the release of all Progress reports on the Knowlerelocation . On 19th March 2015, you said that you would take allnecessary action following the release of the judgement of theFirst Tier tribunal. Their decision has now been made and EDDC haslost their appeal against release.. Progress reports must now bereleased.Full Council has also now decided to re locate.Please now let me have copies of these Progress Reports to date asrequested.Yours faithfully,R Thurlow
Link to this

The press has been very interested in the latest news - with today's Express & Echo covering the story on its front page: 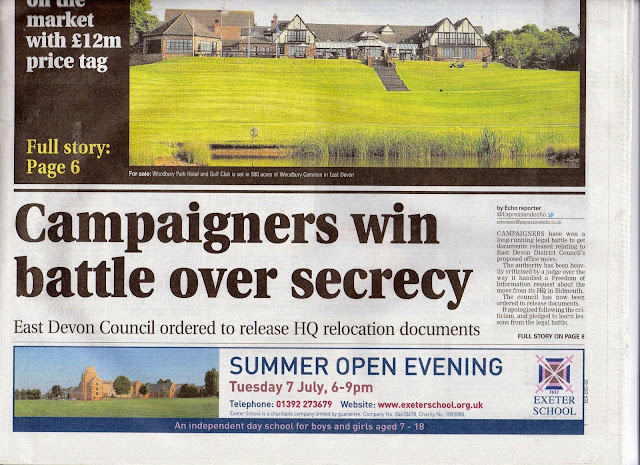 Here is the story in full:

EAST Devon District Council has been heavily criticised over the way it handled a Freedom of Information request relating to its proposed move away from its HQ in Sidmouth.
The authority has been ordered to release documents and said it would comply with the order.
The decision follows a request made in 2013 by Jeremy Woodward, of campaign group Save Our Sidmouth. He asked the authority to release reports prepared by their Project Manager relating to the relocation of its Knowle Offices.
The reports contained information about the costs, programme and background to EDDC’s “ambition” to relocate their offices.
EDDC refused the request, saying the information was confidential.
An appeal was lodged with the Information Commissioner, who ruled in Mr Woodward’s favour, saying that as the reports were prepared by an external consultant they should be released.
EDDC appealed against this decision, and the case went to a legal tribunal which heard oral evidence in August 2014.
After much further correspondence from EDDC, the judge leading the tribunal this week ruled in Mr Woodward’s favour, saying that the Information Commissioner was correct in his interpretation and that information must be released.
He is still waiting for further information from EDDC so that he may make a judgement on the full extent of the disclosures.
But Judge Kennedy QC criticised the authority in his judgement, he said: “This tribunal takes the unusual and unfortunate step of commenting on the conduct of the appeal itself.
“We are unanimous in our view that this appeal has taken much longer than it should have done and the reason for this seems to be the failure on the part of the public authority, the appellant, to address itself with sufficient attention to the details of what information and documents it was supplying to the commissioner and ultimately also to the tribunal
“Correspondence on behalf of the council, rather than ensuring the tribunal was assisted in its function, was at times discourteous and unhelpful.
“We believe this appeal could and should have been dealt with completely at the hearing in August 2014 and the decision promulgated six months ago had the council discharged its responsibilities properly.”
Mr Woodward said: “EDDC has spent over £11,000 of public money in fighting this case, money which could have been spent on much more worthwhile and productive activities.
“Throughout our campaign against the relocation of the Knowle we have continually been battling against EDDC errors, deliberate obfuscations and a refusal to examine rational options.”
He added: “We fully endorse the judge’s conclusions on EDDC’s behaviour. We believe that EDDC personnel involved should be considering their positions.”
An EDDC spokesman said preparations were now being made to release documents.
He said: “Whilst welcoming the tribunal’s recognition that there was some justification for withholding certain types of information, the council will, as instructed, now move to make public all six documents – with redactions.
“We respect the tribunal’s decision and will of course abide by their verdict. We are sorry that the tribunal chairman found our conduct of the appeal to be unhelpful. It’s quite clear that lessons need to be taken away from this experience.”
Campaigners celebrate as East Devon District Council is heavily criticised over secrecy row | Exeter Express and Echo
.
.
.
Posted by Jeremy Woodward at 05:55