The language of bureaucracy >>> >>> David Graeber and "The Utopia of Rules: On Technology, Stupidity, and the Secret Joys of Bureaucracy"

Every local authority and every business is beset with 'too much bureaucracy':
East Devon District Council or the Vatican? | East Devon Watch
Tesco Express chooses bureaucratic nonsense over common sense

David Graeber's The Utopia of Rules: On Technology, Stupidity, and the Secret Joys of Bureaucracy - Boing Boing

This blog has considered a couple of examples:


THE ALIENATING NATURE OF BUREAUCRATIC AND TECHNOCRATIC GOVERNANCE NORMS
The purpose of governance structures imposed by national or EU authorities is often suspected to be the expansion of monitoring. The scale of bureaucracy in these structures repels fishers and other private sector members who feel the slow pace and prescriptive nature of the processing of grants and policy change are incompatible with the immediate pressing needs of the fishing industry

How many of us today can say that we really understand the workings of DEFRA (which Nick Groom in his 'The Seasons: An Elegy for the Passing of the Year' describes as ‘a byword for incompetence’), agricultural subsidies, European legislation on food production, or perhaps most importantly the way small farmers are being driven out of business by the supermarkets...

Futures Forum: Mayday, Mayday >>> 'The Seasons' and looking after 'Identity, Place and Sustainablity'

Last month on Radio 3, we heard about 'the language of bureaucracy':

The Language of Bureaucracy
The Verb
Listen in pop-out player
Ian McMilllan explores the language of bureaucracy...
Julie Schumacher’s novel ‘Dear Committee Members’ (The Friday Project) is a novel written entirely in the form of reference letters. Julie explains what it was like to work within such a restrictive form and how she relates to her protagonist - a ‘small, evil’ part of her. For Julie bureaucratic language eliminates choice, leading to stale, automatic phrasing.

The historian Marc Morris is the author of ‘King John: treachery, tyranny and the Road to the Magna Carta’ (Hutchinson). He explains that bureaucratic documents can be and incredibly important resource for a historian, and how it developed under King John.
Paul Taylor is a Senior Lecturer in Communications Theory at the University of Leeds. Paul is frustrated by bureaucratic language, and delves into literature to find a cure for its worst ills.

BBC Radio 3 - The Verb, The Language of Bureaucracy

Perhaps it's not just the way the state seems to be drawn to the joys of bureaucracy... 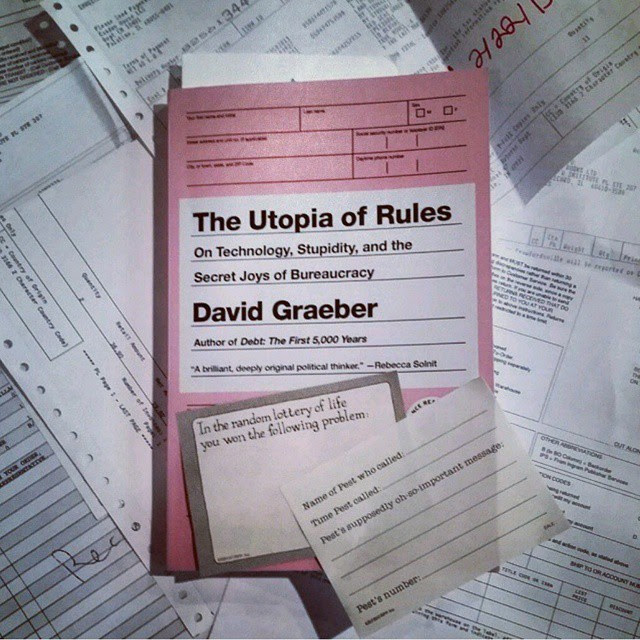 This piece by the author appeared recently in the Financial Times:

David Graeber
March 6, 2015 10:56 am
Next Thumbnails
Nobody seems to like bureaucracy very much, and yet somehow we always seem to end up with more of it. One can see its effects in every aspect of our lives. Indeed, bureaucracy has become the water in which we swim. It fills our days with paperwork. Application forms get longer and more elaborate. Ordinary documents like bills or tickets or memberships come to be buttressed by pages of legalistic fine print.
At least since the 19th century, the idea that a market economy is opposed to and independent of government was used to justify laissez-faire economic policies designed to lessen the role of government, and yet they never actually have that effect. Nor, for example, did English liberalism lead to a reduction of state bureaucracy; instead, we ended up with a ballooning array of legal clerks, registrars, inspectors, notaries and police officials who made the liberal dream of a world of free contract between autonomous individuals possible. And there is little doubt that maintaining a market economy requires a thousand times more paperwork than a Louis XIV-style absolutist monarchy.
I’m going to call this the age of “total bureaucratisation”. I’d like to ask why that is and, particularly, to consider the possibility that many of the blanket condemnations of bureaucracy we hear are, in fact, somewhat disingenuous. Does the experience of operating within a system of formalised rules and regulations, under hierarchies of impersonal officials, hold a kind of covert appeal?
There is a school of thought that holds that bureaucracy tends to expand according to a kind of perverse but inescapable inner logic. The argument runs as follows: if you create a bureaucratic structure to deal with a problem, that structure will invariably end up creating other problems that seem as if they, too, can only be solved by bureaucratic means. In universities, this is sometimes informally referred to as the “creating committees to deal with the problem of too many committees” problem.
A slightly different version of the argument is that once a bureaucracy has been created, it will immediately move to make itself indispensable to anyone trying to wield power, no matter what they wish to do with it. The chief way to do this is always by attempting to monopolise access to certain key types of information.
As Max Weber, one of the greatest German scholars of the later 19th and early 20th centuries, writes: “Every bureaucracy seeks to increase the superiority of the professionally informed by keeping their knowledge and intentions secret . . . in so far as it can, it hides its knowledge and action from criticism.”
One side effect, as Weber also observes, is that once you do create a bureaucracy, it’s almost impossible to get rid of it. The very first bureaucracies we know of were in Mesopotamia and Egypt, and these continued to exist, largely unchanged, as one dynasty or ruling elite replaced another, for literally thousands of years. Similarly, waves of successful invaders were not enough to dislodge the Chinese civil service, with its bureaus, reports, and examination system, which remained firmly in place no matter who actually claimed the Mandate of Heaven. The only real way to rid oneself of an established bureaucracy, according to Weber, is to simply kill them all, as Alaric the Goth did in Imperial Rome, or Genghis Khan in certain parts of the Middle East. Leave any significant number of functionaries alive and, within a few years, they will inevitably end up managing one’s kingdom.
The second possible explanation is that bureaucracy becomes not only indispensable to rulers but holds a genuine appeal to those it administers as well. The simplest explanation for the appeal of bureaucratic procedures lies in their impersonality. Cold, impersonal, bureaucratic relations are much like cash transactions: on the one hand they are soulless; on the other, they are simple, predictable, and treat everyone more or less the same.
And, anyway, who really wants to live in a world where everything is soul? Bureaucracy enables you to deal with other people without having to engage in all those complex and exhausting forms of labour. Just as you can simply place your money on the counter and not have to worry about what the cashier thinks of how you’re dressed, you can also pull out your validated photo ID card without having to explain to the librarian why you are so keen to read about homoerotic themes in 18th-century British verse. Surely this is part of the appeal.
Of course, there is a possibility that all this goes much deeper. It’s not just that the impersonal relations bureaucracies afford are convenient; to some degree, at least, our very ideas of rationality, justice and freedom are founded on them. Consider a moment in human history when a new form of bureaucracy actually did inspire not just widespread passive acquiescence but giddy enthusiasm, even infatuation, and try to understand precisely what it was about it that seemed, to so many people, so exciting.
. . .
One reason it was possible for Weberto describe bureaucracy as the very embodiment of rational efficiency is that in the Germany of his day, bureaucratic institutions really did work well. Perhaps the flagship institution, the pride and joy of the German civil service, was the post office. In the late 19th century, the German postal service was considered one of the great wonders of the modern world. Its efficiency was so legendary that it casts a kind of terrible shadow across the 20th century. Many of the greatest achievements of what we now call “high modernism” were inspired by the German post office. One could indeed make a case that many of the most terrible woes of that century can also be laid at its feet.

David Graeber, anthropologist and 'founder of Occupy', has figured elsewhere on this blog:
Futures Forum: On psychopaths, politicians and doing business
Futures Forum: "Where are the flying cars?" or, "What happened to derail so many credible ideas and prospects?"
Futures Forum: An Exeter Pound: What came first: money or debt? ... David Graeber's "Debt: The First 5000 Years"
.
.
.
Posted by Jeremy Woodward at 01:00