We are now entering the last full day of campaigning in the general election, after a week of intense rivalry:
Futures Forum: Parliamentary elections in East Devon: the final week's campaign suggests "it could come down to just a few hundred votes"
and several 'meet the candidate' sessions:
Futures Forum: Hustings in Sidmouth: East Devon Parliamentary election >>> meet the candidates >>> report

Conservative minister Hugo Swire is under threat in East Devon, normally a safe seat. So who is the woman he claims will "bring chaos"?

Hugo Swire may not be so safe in his East Devon seat Photo: David Wimsett/UPPA

29 Comments
The election could see some upsets, with big names like Nick Clegg and Douglas Alexander under threat. But now Conservative Foreign Office minister Hugo Swire may find himself feeling the pressure due to independent candidate Claire Wright.
Mr Swire has so far been politically impregnable in his East Devon seat, which he first won in 2001 with a majority of 8,200 votes, going on to build it up to 9,114 in 2010. Conservative pundit Iain Dale expects him to win an increased majority next week, pointing out the "big Lib Dem vote to splinter". In a remarkable display of confidence, Mr Swire wrote to his local newspaper to stress that his East Devon seat should be classified as safe, not a marginal. But the bookies aren't so sure, and as they say in politics, it's good to follow the money.
Claire Wright introduces her manifesto
Ms Wright is the Conservative minister's best-placed challenger, the bookies say, with Ladbrokes giving her 5-1 odds to win, better than Ukip (14/1), the Liberal Democrats (66/1) and Labour (100/1). Her odds, originally quoted at 66/1 by William Hill, have improved and now stand at 9/2. Hugo Swire’s odds, however, have deteriorated, slipping from 1/12 in late February to 1/6. So who is this independent threatening Hugo Swire's seat?
Claire Wright, an independent councillor representing the town of Ottery in East Devon, stood for Parliament because she was "angry about the way central government treats its citizens". A local campaigner, the 39 year old worked in the NHS from 2001, in a public relations role, starting numerous health campaigns. She also worked for Devon County Council before becoming a freelance in 2008, serving on Ottery Town Council from 2009 to 2013 and then East Devon District Council.
In May 2013, Claire was elected to the Devon County Council after securing 2,974 votes which represented 74 per cent of the total vote, making it the biggest share in the South West. She is the leader of the non-aligned group of three Independents on the council and one Green councillor. On the council, she has focussed on two issues: transparency and working to "save the district from the very real threat of over-development".
Show constituency info
She has boasted of her independent credentials, telling voters: "I can speak out freely, unfettered by party politics". "Becoming a Councillor felt like a natural step in becoming part of the decision making process," she said. "I particularly wanted to help represent resident in the planning process, which is complex and difficult to navigate for most people." 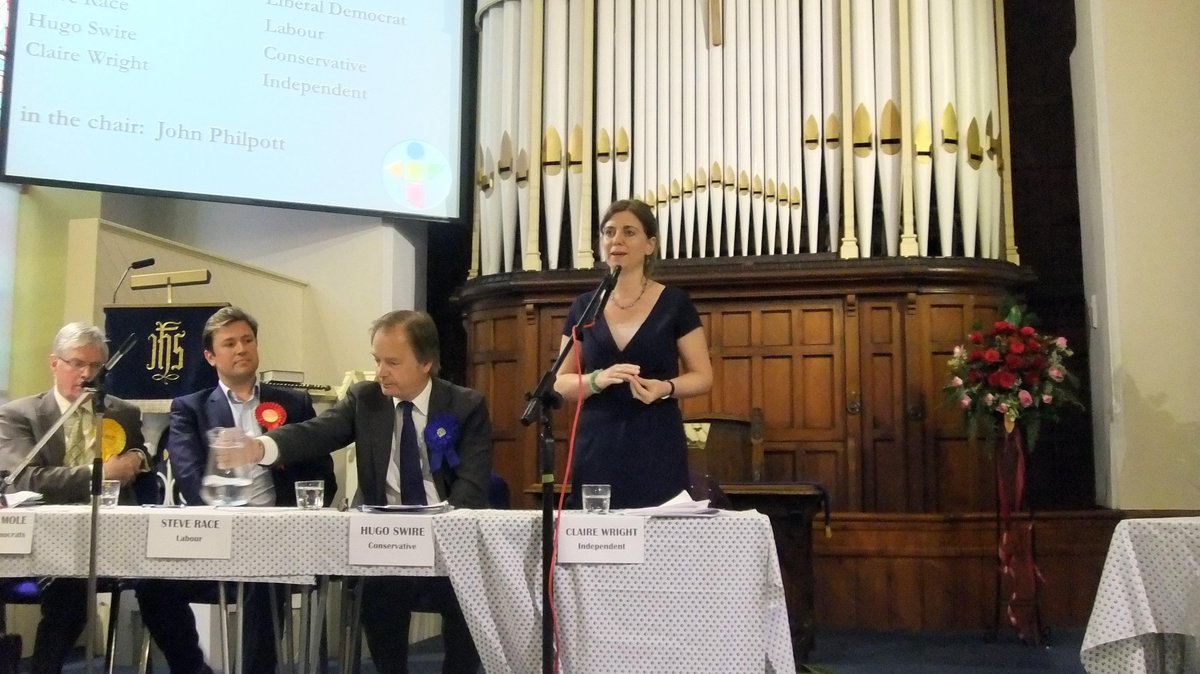 Hugo Swire has recently hit out at her rising popularity, writing in a local newspaper column back in February that voting for an independent "will bring chaos, just at a time when Britain is on the cusp of locking in recovery, growth, more jobs and better wages."
Mr Swire recently got into a spot of bother after he was captured on film joking about benefit claimants at a Tory fundraiser, later passing off his quip as an “off the cuff dig” to raise money.
video
Leading an auction at Grosvenor House in London, the footage - for Channel 4 Dispatches - showed the MP for East Devon attempting to encourage a bid by saying “£60,000 … Ian, persuade him … He’s not on benefits is he? Well if he is, then he can afford it … £55,000?”.
Claire Wright quickly leapt on the remarks, saying in a statement: “Mr Swire obviously lacks understanding and empathy with ordinary people. It shows him in a poor and callous light. This insensitive and tasteless comment comes from a minister in a government that has assured us that ‘we are all in it together’ and they probably still don’t understand why millions of us think that is a bad joke."
If Ms Wright goes on to win in East Devon next week, Mr Swire will only wish the shock upset was another "bad joke".

Meet the Ottery independent candidate who could take one of the Tories' safest seats - Telegraph
.
.
.
Posted by Jeremy Woodward at 02:00