This is from the latest Midweek Herald:

Council branded ‘discourteous and unhelpful’ in tribunal verdict into headquarters secrecy row.
Campaigners have called for staff to ‘consider their positions’ after East Devon District Council (EDDC) blew £11,000 of tax-payers’ cash in a failed secrecy row.
A judge blasted EDDC as ‘discourteous and unhelpful’ after rejecting its appeal for confidential documents, relating to its controversial relocation project, to remain private.
The verdict brings to a close an eight-month legal battle - which began when a Sidmouth resident lodged a Freedom of Information (FoI) request and ended up in court.
EDDC spent a five-figure sum on lawyers’ fees.
The judge in the case took the ‘unusual and unfortunate’ step of criticising the council’s conduct during the process, which he said had delayed the tribunal’s decision by six months.
EDDC says it is now reviewing all relevant documents with a view to publishing those that the court has called for - plus any others that are ‘no longer commercially sensitive’.
However, the ruling comes too late to influence the decision on the relocation project, which was given the final go-ahead by councillors on March 25.
Campaigners from Save Our Sidmouth (SOS) welcomed the verdict, saying that council personnel involved should be ‘considering their positions’.
Sidmouth resident Jeremy Woodward originally lodged an FoI request for the relocation documents. He said this week that the council had ‘brought itself in to disrepute’ with its ‘shambolic’ handling of his initial request, and the subsequent appeal. Mr Woodward’s original FoI in February 2013 asked the council to release reports containing background information about the authority’s proposed relocation from Sidmouth. His request was refused, with the authority arguing the documents were exempt from FoI rules.
However, the Information Commissioner’s Office ruled that seven reports should be released. EDDC appealed the decision and a hearing took place at Exeter Magistrates’ Court in August 2014.
In the verdict published this week, Judge Brian Kennedy QC said the appeal ‘could and should’ have been completed in August, had EDDC ‘discharged its responsibilities properly’. He added: “Correspondence on behalf of the council, rather than ensuring the tribunal was assisted in its function, was at times discourteous and unhelpful, including the statement that we had the most legible copies [of the disputed information] possible. A statement which was clearly inaccurate as, subsequently, we have been provided with perfectly legible documents.”
SOS said in a statement: “Throughout our campaign against the relocation, we have continually been battling EDDC errors, deliberate obfuscations and a refusal to examine rational options. We fully endorse the judge’s conclusions on EDDC’s behaviour, not only related to this particular event. We believe that EDDC personnel involved should be considering their positions.”
An EDDC spokesman said: “It’s quite clear that lessons need to be taken away from this experience. These lessons can and will be learned and steps will be taken at the very earliest opportunity to look at the conduct of our appeal. In any form of partnership working, each partner has to respect the commercial sensitivity of certain information. This can be a difficult balancing act and we have to reflect on the fact that, in this case, we may not have got that balance right.”
‘Heads should roll’ as judge criticises EDDC - News - Midweek Herald

And this appeared on the front page of yesterday's Express & Echo: 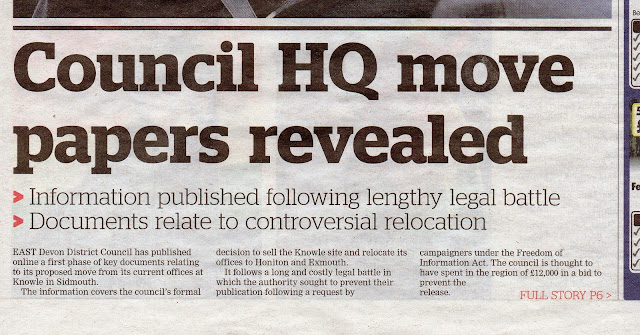 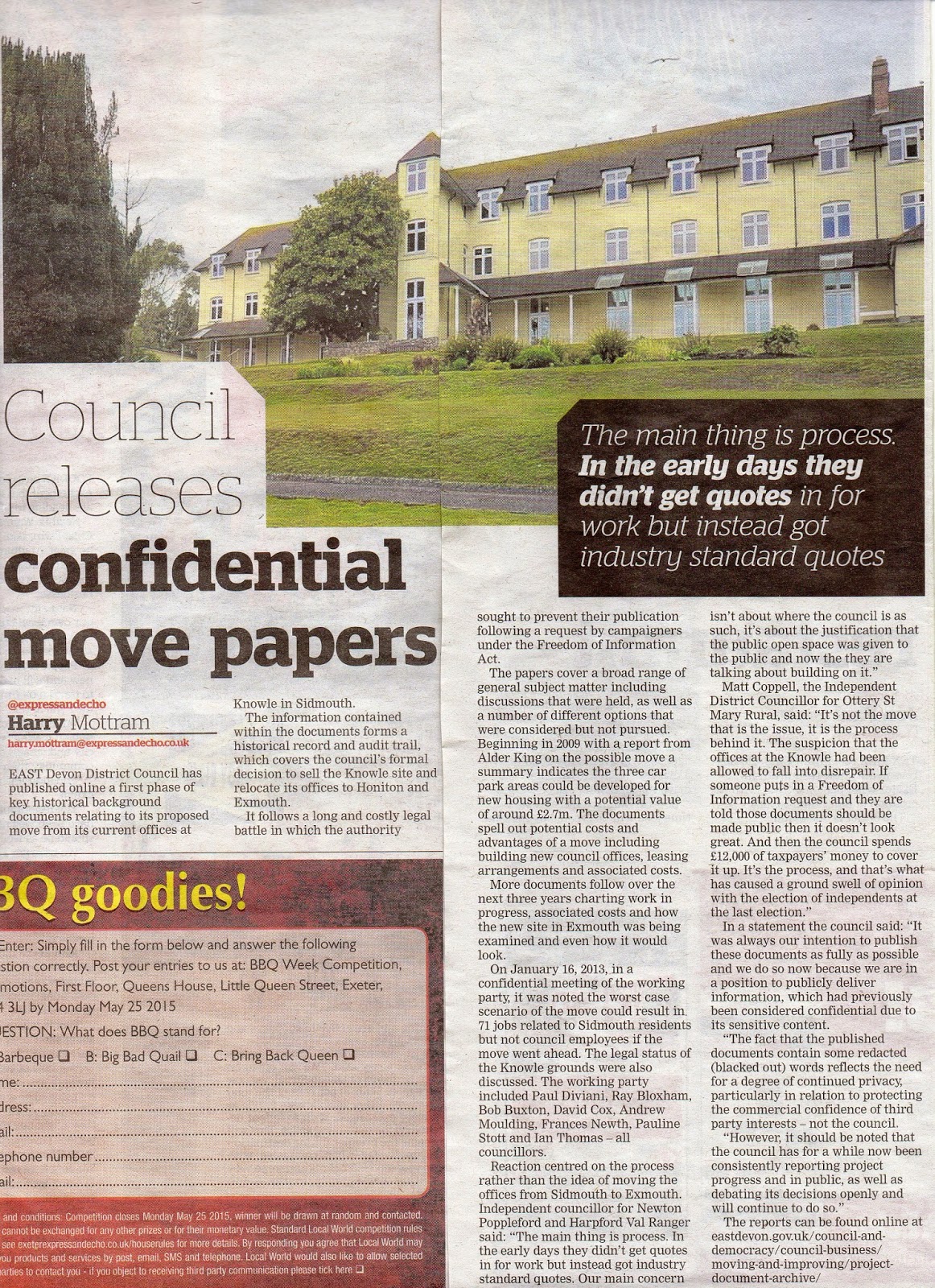