This would include a 'Park and Change' facility, as reported in November 2011:

Picture by Alex Walton. Ref shs 7217-08-08AW
SIDMOUTH will be the first place in Devon to trial a ‘park and change’ system, according to hopeful highways chiefs.
Business leaders have expressed concerns the facility, earmarked by Devon County Council (DCC) for a piece of land off Woolbrook Road, will serve Exeter more than the town.
But Councillor Stuart Hughes, DCC cabinet member for highways and transportation, said the project will bring people to Sidmouth – and that detractors needed to “embrace change”.
He hopes the mooted facility - set for a site next to Greenway Lane - can become a reality in roughly 18 months to two years.
“These opportunities only come along once,” said Cllr Hughes.
DCC’s vision would see people drive, walk and cycle to the park and change where they could, then travel by bus into Sidmouth or to places like Exeter.
“The Woolbrook site is so important because it’s serviced by so many busses,” said Mr Hughes. “Park and ride, or park and change, has to be near a bus route.
“Park and change is a new concept and something DCC has come up with. I’m pleased Sidmouth is going to be the place we’re going to trial it. “There will be a lot of sites along the A3052 corridor.
“A lot of people will be coming to the town once we have got this system working. It’s in its infancy, but being a pilot area will attract more people to our town.”
Mr Hughes added the scheme would see two small busses “circling Sidmouth all the time”.
“We’ve got a great opportunity and we’ve got to grasp it.
“DCC has now got the land. The next step is to get funding to build it.”
He said a cycle route from Feniton to Sidmouth and a new bridge over the A3052 were also possibilites.
Sidmouth Chamber of Commerce members discussed park and change while debating town parking and transport issues earlier this month.
Sidmouth Garden Centre owner Ian Barlow said: “It’s not really for Sidmouth.”
Chairman Richard Eley added: “It’s got nothing to do with park and ride for Sidmouth, it’s entirely about reducing traffic into Exeter.”
Sidmouth park and change ‘within two years’ - News - Sidmouth Herald

These same concerns have been voiced once again: 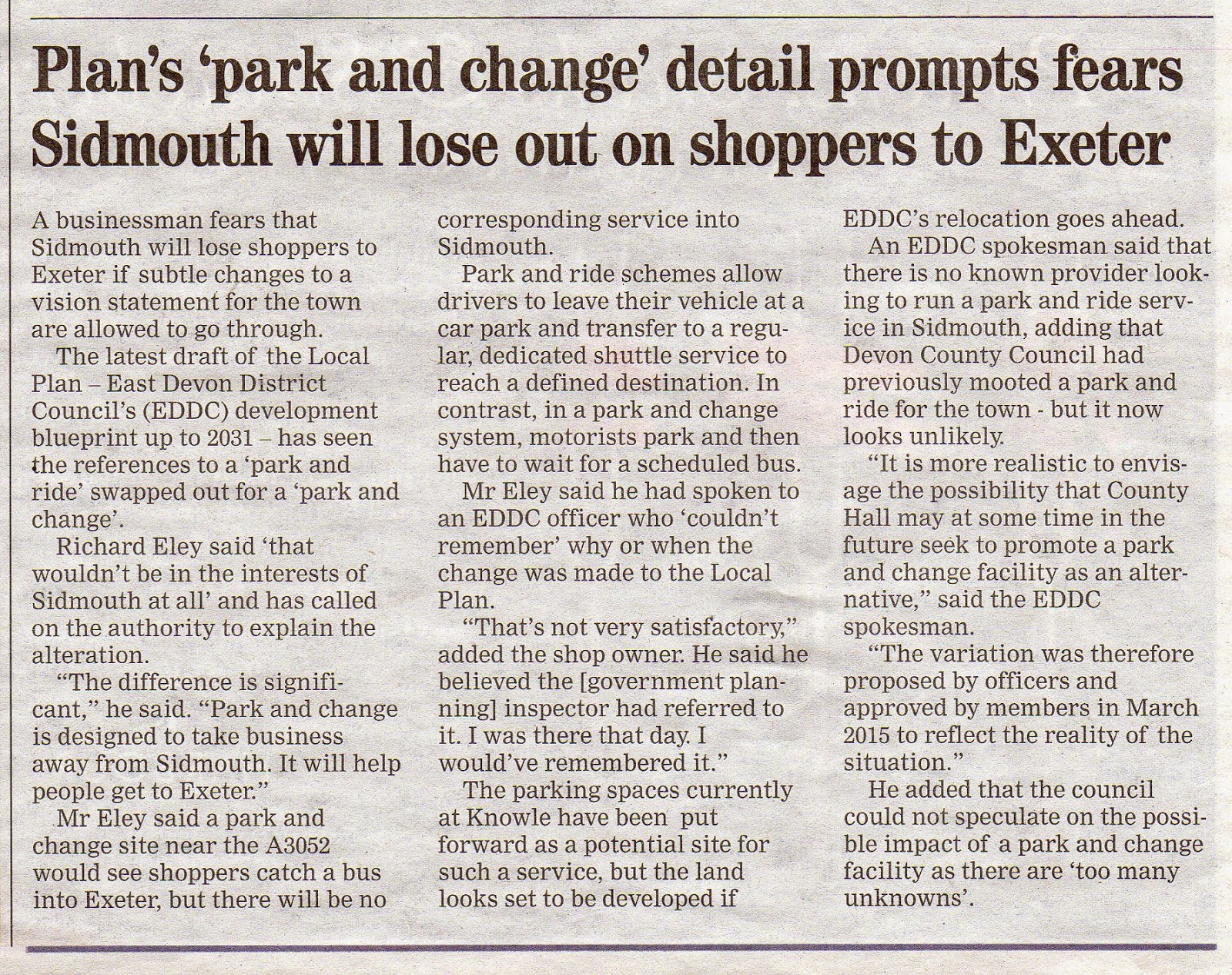 And last year, these issues were debated on the on-line forum Streetlife:

Weed about a year ago
Page 3 Sidmouth Herald

Is this the site opposite Penrose  Place to Ice House Lane/Bennetts Hill area?  Or is higher up?  If it is around Greenaway Lane this is a large potential site.

A DEVELOPER has sized up a piece of Sidmouth land big enough to accommodate hundreds of new homes - over the road from where 103 dwellings are being built.
Back to present:
According to the Sidmouth Herald today, it states "big enough for 257 homes".  The number of homes seems to have increased.

Weeda year ago
Or is this land the section adjoining 3052 to Greenaway Lane?

When you start to consider to build in Area of Outstanding Natural Beauty, it could make a all areas of A.O.N.B. at risk.  It may set a precedence.

Old Boota year ago
I anticipate more drainage problems, with more green fields being covered in concrete, and the Woolbrook, already prone to floooding, doing so more frequently.

Weeda year ago
Is the potential site by where the Sidmouth Folk Festival camp was held last year?  I know they are moving to another on Salcombe Hill.

PennyPinchera year ago
I thought the site was earmarked for the Park & Ride scheme. But EDDC like to have more money in coffers rather than protect what used to be 'The Jewel in the Crown' of east Devon.
The words killing Golden Goose comes to mind

Weeda year ago
We were 'sold' the development  with the increased traffic, they would put in a Park and Ride scheme............to help with congestion.

The problem is the there is no opposition to challenge anything, we all seem just to forget.

One of my friends, lives in West Hill and Councillor Claire Wright has been brilliant with planning proposals by her and the work she has put in.

Also some farmland is owned by builders as investments and they are wanting to make quick profits.

Weeda year ago
If the site is opposite Penrose Place....the water coming down from the field today (5.00 p.m.) onto the road, will not be helped if that area is built on.  The ground will absorb a certain amount.....concrete..........well, it may be detrimental to the homes opposite.


Streetlife | Persimmon to push for Woolbrook Road site
Futures Forum: Streetlife: a place to exchange news and views on Sidmouth
.
.
.
Posted by Jeremy Woodward at 03:04