One of the key issues of an election campaign - both locally and nationally - tends to be that double act of 'jobs and homes', otherwise known as 'sustainable development':
Morning Star :: Bennett vows public rail, jobs and homes
Some young Conservative voters look to Labour for jobs and homes | Reuters
David Cameron pledges jobs and homes in pre-conference BBC interview at Salford Quays - Manchester Evening News
Election 2015 policies guide: summary of comparisons - Telegraph

The question is whether this can indeed be done in a truly 'sustainable way'.

On Radio 4 recently, the idea of the 'circular economy' was considered
Futures Forum: The Circular Economy @ Radio 4's In Business

- and the example of maximising land-use was given: In other words, land is not a limited resource:


The World Is Bigger than You Think

Resources are an economic, not physical, phenomenon
April 16, 2015


The world is bigger than you think. That’s the strange conclusion that follows from some basic economic principles, as explained by Professor Don Boudreaux.
A lot people think that rising human population poses a threat to society because, logically, there is a limited amount of dry land on earth, and so living space and farmland must “run out” eventually.
Stop-Overpopulation.org sums up this idea nicely:

It is really simple: Planet Earth does not grow. But humans keep multiplying.

This means: Less of everything for everybody. Less room for plants and animals.

Obvious, intuitive, and wrong. It’s wrong because, while it’s true that Earth is not growing, the supply of land is not fixed. From an economic perspective, the resource “land” doesn’t mean “dirt above sea level.” Land’s capacity can change and expand in all sorts of ways, depending on its use and value. Boudreaux explains,

Two acres is two acres, whether you’re in Alaska or New York, but thanks to the power of prices and human ingenuity, millions of people can live and work on the little island of Manhattan. The capacity of land in the city has expanded by orders of magnitude while the Earth has not expanded an inch.
But NYC isn’t self-sustaining. Its residents rely on vast areas under cultivation all over the globe, and usable farmland is even scarcer than land for building. But that’s not fixed, either.

Land’s economic capacity expands also in other, less obvious ways.  The same acre of land that in 1950 annually yielded 25 bushels of wheat has, economically, become two acres of land by today annually yielding 50 bushels.  So the creation and improvements of tractors and other farm machines increase the supply of land.  Likewise with the creation and improvements of fertilizers, pesticides, and genetically modified seeds and livestock.

This really good news for consumers, farmers, and humanity generally, but it’s also good news for people who care about the environment. As Matt Ridley points out in his book the Rational Optimist,

If the average yields of 1961 had still prevailed in 1998, then to feed six billion people would have required the ploughing of 7.9 billion acres, instead of the 3.7 billion acres actually ploughed in 1998: an extra area the size of South America minus Chile.

And that’s optimistically assuming that yields would have remained at the same level in the newly cultivated land, taken from the rainforests, the swamps and the semi-deserts. . . .

To put another way, today people farm (i.e., plough, crop or graze) just 38 per cent of the land area of the earth, whereas with 1961 yields they would have to farm 82 per cent to feed today’s population.  Intensification has saved 44 per cent of this planet for wilderness.

Not only does the supply of land grow dynamically in response to demand and innovation, Stop-Overpopulation.org has it exactly backward: Humans keep multiplying, and there is far more for everyone, including plants and animals.
And there are other technologies that also multiply the capacity of land.

Yet another innovation that effectively increases the supply of land is refrigeration: by preserving food longer, refrigeration turns any given physical yield from land into an increased economic yield - which is economically identical to increasing the physical amount of land.  Ditto for transportation improvements that get food to consumers faster (and, hence, fresher) and with less damage and loss.

Even technology that we generally think of as “shrinking” the planet — the car, railroad, and airplane, as well as phones and the Internet — enormously multiplies the productive capacity of surface land devoted to transportation and communication.

The economic supply of land, like that of any other resource you can name, is not a physical phenomenon.  As long as people are free and inspired to innovate – and as long as input and output prices are free to adjust to changes in supply and demand – the economic supplies of even the most ‘fixed’ and ‘nonrenewable’ resources will expand.

This was the economist Julian Simon’s great insight: the ultimate resource is the human mind. As I put it in the Commentator,

The reason why our intuition about the “limits to growth” is so wrong is that it fails to comprehend the role of human ingenuity in shaping and harnessing the environment. More people in a global market economy means more minds working to solving problems, more people producing things for each other, and more knowledge and ideas available to everyone.
Growth is only limited by our ability to innovate and solve problems, and that is only limited by our access to innovators and problem solvers.

The quixotic effort to quantify the exact amount of resources on earth and calculate when we will “run out” is doomed to fail because people are constantly inventing new ideas and discovering new uses for things. Nothing is a resource until someone discovers an application for it. ... “Natural” resources are not fixed because resources are not found in nature – they are created by the human mind.

The earth is bigger than you think, and thanks to the power of prices encouraging innovation, intensification, and conservation, it will grow and evolve with us.
Update: A neat map on density (slightly dated) from Per Square Mile, showing where the entire human population could fit if we lived in a single city: 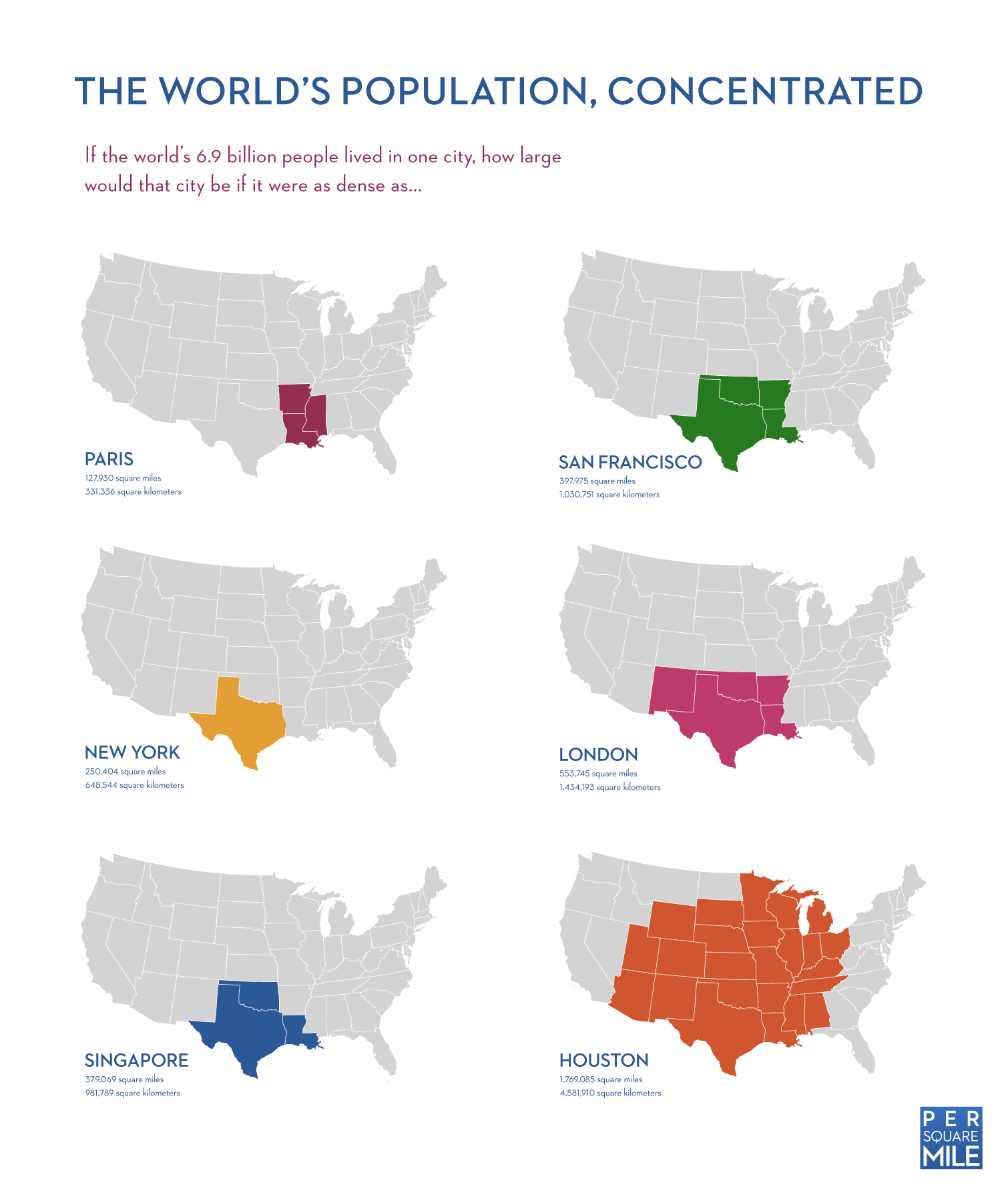 The World Is Bigger than You Think : Anything Peaceful : Foundation for Economic Education
.
.
.
Posted by Jeremy Woodward at 02:00