William Turner painted some of the most spectacular sunsets, the skies drenched with volcanic dust: 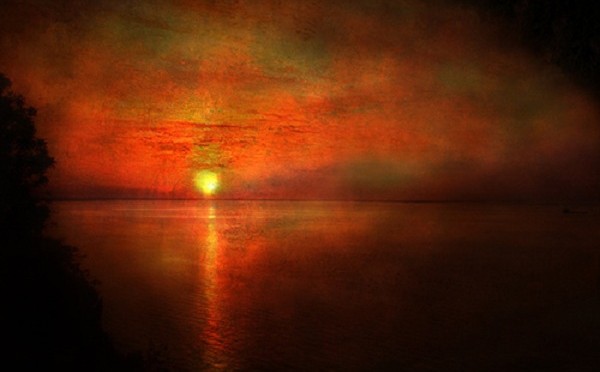 Mary Shelley was writing her Gothic masterpiece during the unbalanced weather of Switzerland in the summer of 1816:

This was the "Year without a summer": 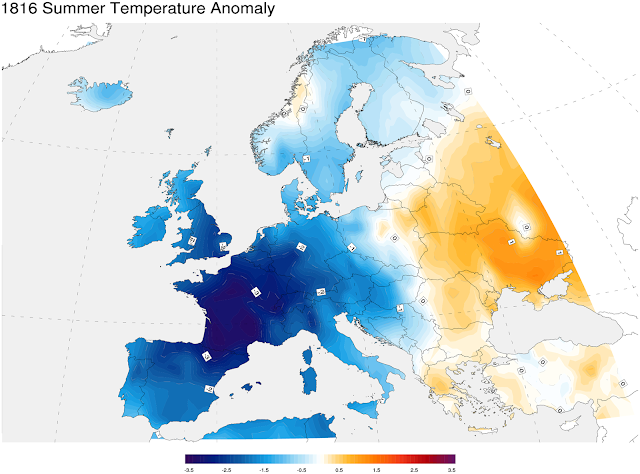 Year Without a Summer - Wikipedia, the free encyclopedia
Jahr ohne Sommer – Wikipedia
Climate Change: Vital Signs of the Planet: The year without a summer
Floods, Famine, Frosts and Frankenstein in 'The Year Without Summer'

An excellent book came out a couple of years ago:
The Year Without Summer: 1816 and the Volcano That Darkened the World and Changed History eBook: William K. Klingaman, Nicholas P. Klingaman: Amazon.co.uk: Kindle Store

Here's a review, considering the implications for today:

The Year Without Summer and Climate Change Today

When a massive volcano exploded in 1816, it plunged temperatures around the world. Mark Hertsgaard on the eerie parallels between this catastrophe and climate change in our own time.
The terms “global warming” and “climate change” never once appear in this book, but in relating the history of a literally earth-shaking event that occurred 200 years ago, the authors of The Year Without Summer have described a past that resembles our present in ways so uncanny, so numerous and fundamental, that the reader can only hope that Marx’s dictum—history happens twice, the first time as tragedy, the second as farce—will turn out to be wrong this time around.
The earth-shaking event in question? Not a military battle, not the overthrow of a government, the invention of a revolutionary technology, or any of the other human-centric themes that preoccupy most history books. No, this event’s protagonists were natural forces: a volcano whose eruption was the most powerful in recorded history, and the many changes that the volcano’s smoke and ash triggered on this planet.
The volcano, named Tambora and located on the island of Java in what is now Indonesia, exploded on April 5, 1816. As superheated liquid rock and gas gushed down the mountainside, an estimated 12,000 local people perished within 24 hours.
But a far greater, and distant, death toll was yet to come. As the eruption’s detritus rose into the sky, it cohered into an aerosol cloud the size of Australia. Winds then blew this cloud westward across the continents, over Asia, Europe, and the Americas.
Invisibly small, the droplets of sulfuric acid that formed this cloud were too light to fall to earth through gravity’s pull yet had enough mass to reflect some of the sun’s incoming rays back to space. The result was a dramatic shift in global temperatures. Before the year was out, weather on much of the planet had turned strange, nasty, brutal, and, above all, extremely cold.
Cold? Come again? Doesn’t that repudiate any linkage to global warming? On the contrary: it highlights the first parallel between the Tambora eruption and our own day’s experience with climate change, including a long-running misreading of what is actually taking place in the physical world we inhabit.

The Year Without Summer and Climate Change Today - The Daily Beast
.
.
.