In one corner of Sidmouth, a project to green up a rather dismal piece of concrete is about to happen:
Futures Forum: "Greening grey Britain for health and happiness" >>> a sensory garden for Sidmouth

In another, a project to pour concrete on the greenery and hide it behind an imposed layer of new greenery (aka: an 'orangery') is about to happen: 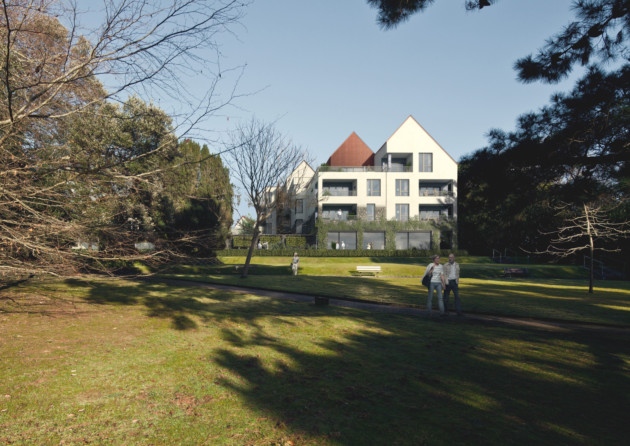 Here is an excellent piece from the Financial Times which explores the 'greening' of buildings:

Is the trend for foliage on buildings a fig leaf for poor design?

©Patrick Bingham-Hall
Parkroyal on Pickering, a hotel in Singapore designed by WOHA Architects
Spend an evening in London’s Shoreditch or New York’s Red Hook and you might think that we have now passed peak beard and are on the way to smoother chops. But what has happened is that fuzz has simply migrated. It has spread up the sides of super-high-end developments, towers and condo blocks. It seems to sprout from renderings on billboards and site hoardings, from the pages of newspaper property sections and glossy magazines. And all that stubble and bum fluff has gone green.
Green fuzz — trees sprouting from rooftops, balconies turned into forests, shrubs spiralling up the sides of towers. It looks like some kind of post-apocalyptic vision of deserted cities reverting to nature.

FirstFT is our new essential daily email briefing of the best stories from across the web
First there were green walls; spongy masses of foliage creeping up the sides of exposed flanks. Then Stefano Boeri’s Bosco Verticale in MiIan kicked off the new trend in earnest. Looking like a classy shelf unit in a garden centre, this rather original notion envisaged its protruding floor-plates as strata of shrubberies so that the structure itself began to disappear. So far the Bosco Verticale doesn’t much resemble the renderings. Instead, the white balconies protrude from the grey tower like an uncompleted model kit with a few bits of those squishy mossy green shrubs you used to get for model railway layouts. It is unfair, of course, to criticise as, presumably, the plants have to bed in and grow. But will they ever resemble those luxurious crops on the rendering?
That is the question that plagues all these green towers. Will they really ever look like they do on the billboards? The question is important because what this outbreak of green means is that architects and developers are hiding ugly, ill-considered buildings behind curtains of foliage and if the green doesn’t grow, all we’re left with is the dumb, naked towers, blank and expressionless with the fig leaf of a few, well, fig leaves for cover.

©Paolo Rosselli
Bosco Verticale in Milan by Stefano Boeri
This is truly a global fashion. In recent weeks alone designs have been released for New York City by Bjarke Ingels Group (trees spiralling up the side of a new tower) and for Bordeaux by the usually brilliant Sou Fujimoto (here resorting to tree-cladding a tower design). And in London we have the most egregious of all examples, the execrable Garden Bridge. This clunky structure, which fails to address even the most basic urban manners, exists only because of the green fluff. Renderings visualise a paved, winding walkway through a romantic grove as a couple walk unencumbered through the foliage. For the reality, check out New York’s High Line on a Saturday afternoon, another structure sprouting semi-successful shrubs which somehow fails to present the paradise it promised. The bridge is the conception of a huge, utterly unnecessary structure designed to support the little bits of green.

©Paolo Rosselli
Bosco Verticale
Or think of Rafael Viñoly’s much-touted “Sky Garden” atop the Walkie-Talkie, 20 Fenchurch Street. This was supposed to be a semi-tropical paradise, a jungle of green crowning the swollen head of one of London’s most prominent towers. Without this green spiel, without the promise of a public park at its peak, this building, standing apart from the main city cluster and seriously overscaled, would almost certainly never have received planning permission. So how did that turn out? A few shrubs in pots and a “rock garden” that looks like something hastily knocked up to cover over temporary works in an airport lounge. These do not constitute a garden. Patio, perhaps. At a pinch.

©Roland Halbe
Jean Nouvel's One Central Park in Sydney
A recent raft of projects for the French capital under the umbrella of “Reinventer Paris” seemed to be composed of buildings conceived almost solely as a substrate for greenery. Another striking design from Sou Fujimoto, for a huge tree-encrusted doughnut beside the Périphérique, looks destined to remain forever a rendering. Yet almost every one of the 23 striking buildings planned for the city over the next few years is cloaked in some kind of shrubbery. It seems to have got out of hand. The architectural equivalent of Leylandii.

©Roland Halbe
One Central Park's 'Sky Garden', a cantilevered terrace extending from the 29th floor
In some cities these green visions can work, sort of. In Singapore, for instance, where the problem is how to stop things growing all year round, there is something soothing about green cladding the otherwise bland buildings. Parkroyal on Pickering by WOHA Architects is wrapped in layers of foliage which never quite become gardens but are remarkably green. In Sydney, Jean Nouvel’s One Central Park is made a little less ugly by its few straggly creepers. The greened walls of São Paulo’s Firma Casa gallery (designed by SuperLimão) are tropically seductive. Yet in most examples the new green cladding adds up to little more than a hypertrophied version of geraniums on windowsills. A futile gesture against a city that should be embraced, not resisted.

©Bax Walker/Alamy
Rafael Viñoly's 'Sky Garden' at the top of the Walkie-Talkie building in London
We all like green, everybody loves trees, but that is the weakness that is being exploited here. In cloaking their proposals in fluffy flora, developers and architects are attempting a sleight of hand, a misdirection. Even worse, this fashion reveals a collapse in confidence in the language and power of architectural expression. It is an admission of defeat, a retreat from the responsibility of designing elevations to enhance a city through an architecture of intelligence, elegance and intent rather than a kind of straggly green comb-over.

©The Garden Bridge Trust
An artist's image of the proposed Garden Bridge crossing the river Thames in London
Trees are great. They seem to be an unalloyed good — all that production of oxygen and indisputable greenness. Trees make a street into a boulevard, a piazza into a place of shelter, a strip of wasteland into a park. Even on roofs they can work well, as they do in Milanese apartment blocks, creating a layer of green above and a new green vantage point (so long as their roots can be managed). Yet trees are not a substitute for architecture. Next time you see a billboard or a glossy magazine ad featuring a pubic fuzz of foliage and overflowing vines, look carefully at what is underneath. The chances are it is ill-considered tat. Plants, remember, grow best from bullshit.

Buildings as farms: from terrace truffles to skyscraper-sourced sausages

The taste for overflowing green on contemporary towers provokes another question, writes Edwin Heathcote . Why not grow something useful? It is true that real estate prices make urban agriculture completely uneconomic, a ridiculous proposition compared with building upmarket apartments in London or New York, but we are predicating our architecture on contemporary conditions.

©Vincent Callebaut
CGI of Vincent Callebaut's concept for Reinventer Paris
Just as once we planned cities for cars in an age of abundant fossil fuels (not to mention building in deserts where life is dependent on air conditioning and expensive water), what if global population growth and climate change make food radically more expensive?
The discovery of cannabis farms in London terraced houses is a staple of the funnies at the end of the local news. Tropical jungles established in uninhabited urban rooms with sophisticated, automated systems for irrigation and temperature control become worthwhile because of the value of the crop. But if you have tried to buy vegetables or fruit at Borough Market (around the corner from the FT’s headquarters) you’ll wonder whether there might not be an alternative industry to real estate investment. How about truffles on terraces? Or matsutake mushrooms in the basement beside the boiler?
Architects worldwide are proposing vertical farming schemes: some ridiculous, some provocative, some semi-serious. Richard Rogers’ practice RSHP (the architects behind the world’s most expensive apartments at One Hyde Park) last month proposed a vertical farm shaped like an anorexic cooling tower and constructed from bamboo. Belgian architect Vincent Callebaut reimagined low-rise Paris as a city of insane green skyscrapers — sci-fi futurism but also just a little seductive and better than that depicted in the film Soylent Green.
In fact the 23 rather impressive designs of the recent Reinventer Paris project almost all feature some form of urban agriculture. My favourite of all, though, is not that green but very agricultural. Dutch practice MVRDV’s Pig City was a suggestion for towers of porcine production, with breeding, feeding, living, slaughtering and processing (skyscraper to sausage) all contained within one tower. It was not entirely serious, yet it was seriously provocative, and an engaging comment on urban conditions for humans and animals.
Conditions change. A couple of generations ago Britons spent one-third of their income on food, now they spend about one-tenth. It is possible that some foodstuffs will become so expensive — or so desirable — that it will become economic to grow them, perhaps at first on flat roofs, then in leftover urban spaces and pocket parks, then, potentially, in specially-built urban structures — perhaps on less desirable land near airports or on former industrial sites. Technology, in the form of aquaponics, in which the waste from farmed fish is used as fertiliser in a closed system, is moving fast and tech entrepreneurs (including Indoor Harvest) are getting in on the act. Farmed Here, a vertical agriculture project in suburban Chicago already grows salad and herbs successfully while Growing Underground farms similar produce 33 metres below the streets of south London. None of this has changed the world so far, and it will be some time before it does, but people are increasingly willing to pay a premium for locally produced foods. How much more local could it be than the tower next door? Or the balcony? Forget the straggly green fluff on renderings, get parsley, pork and potatoes from the terrace and the tower.
Edwin Heathcote is the FT’s architecture and design critic
Photographs: Patrick Bingham-Hall; Paolo Rosselli; Roland Halbe; Bax Walker/Alamy; The Garden Bridge Trust; Bjarke Ingels Group; Vincent Callebaut