Peak Oil: and M King Hubbert >>> new biography out on the 'father of peak oil' >>> "The Oracle of Oil: A Maverick Geologist's Quest for a Sustainable Future"

This blog has just received this message:


In researching peak oil, I came across a long article you'd written on the topic in 2014.

Given your interest in this topic, I thought you might want to read my book, just released by W.W. Norton, The Oracle of Oil: A Maverick Geologist's Quest for a Sustainable Future.

It's the first biography of M. King Hubbert, the "father of peak oil," covering his whole body of work but focused primarily on his peak oil predictions and his wider ideas about energy and society.

Last week my book received very positive reviews in both Science and Nature. Quotes from the reviews are below, and links to the full reviews, along with others' comments on the book, are on my website.

For a sense of what the book is like, you can read an excerpt at Scientific American:
"How the Prophet of Peak Oil Explained Fracking in the 1950s"

Science: "The Oracle of Oil is a masterful telling of Hubbert’s life and ideas, written by journalist Mason Inman, a knowledgeable and graceful storyteller."

Nature: "In Hubbert’s story, Inman has found a meditation on the booms and busts that marked twentieth-century economic growth.​... In writing the first biography of Hubbert, Inman has retrieved, if not rescued, the story of a scientist who has much to offer to today’s energy conundrum."

Author of The Oracle of Oil


The Oracle of Oil - The book

Here is the author speaking on the Resilience website:

The Oracle of Oil 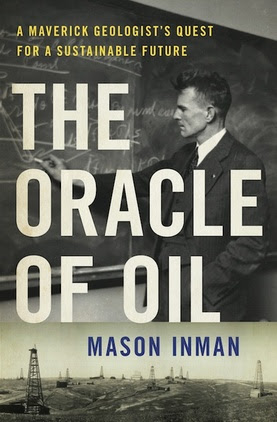 Download
Many have heard of peak oil, but few seem to understand what it really means, and fewer still know much of anything about the father of the idea, M. King Hubbert.
In this episode we interview science journalist Mason Inman, who has written the first biography of Hubbert: The Oracle of Oil: A Maverick Geologist’s Quest for a Sustainable Future

which hits the shelves April 11. Deeply researched and rich with detail about the debates over our energy future (and energy transition) from the 1940s through the 1980s, the book is a terrific read for anyone interested in peak oil theory, what it is about, and what it is not about (for example, oil prices!).
Today’s debates about the future of energy aren’t too dissimilar from the debates of 60-70 years ago…and that should make us think hard about where we’re going.
Check out the interview. It just may be the best material you’ll ever find on what “peak oil” really is.
Plus: I explain why I’m skeptical about IEA’s new report on the decoupling of carbon emissions and economic growth.

And here are a cuople of reviews of the book:
Review: The Oracle of Oil by Mason Inman - Resilience
Peaks and troughs : Nature Energy
.
.
.
Posted by Jeremy Woodward at 15:04