The Ice Link interconnector from Iceland to the UK >>> "How much unspoiled nature should we preserve and what do we sacrifice for clean, renewable energy?"

The RSPB believes that renewable energies - including wind farms - should be developed as a matter of urgency:
Futures Forum: Climate change "poses the single greatest long-term threat to birds and other wildlife, and the RSPB recognises the essential role of renewable energy in addressing this problem."

The opinion around wind turbines is mixed to say the least:
Futures Forum: "In praise of wind turbines": man-made landscapes

But what about the threat posed to the landscape by electricity-carrying pylons?
Futures Forum: The aesthetics of development: pylons and windfarms

This is the question being asked in Iceland: 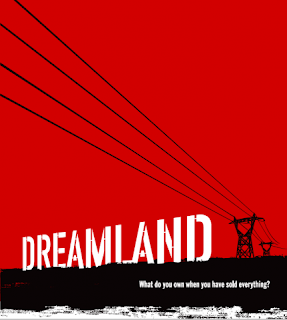 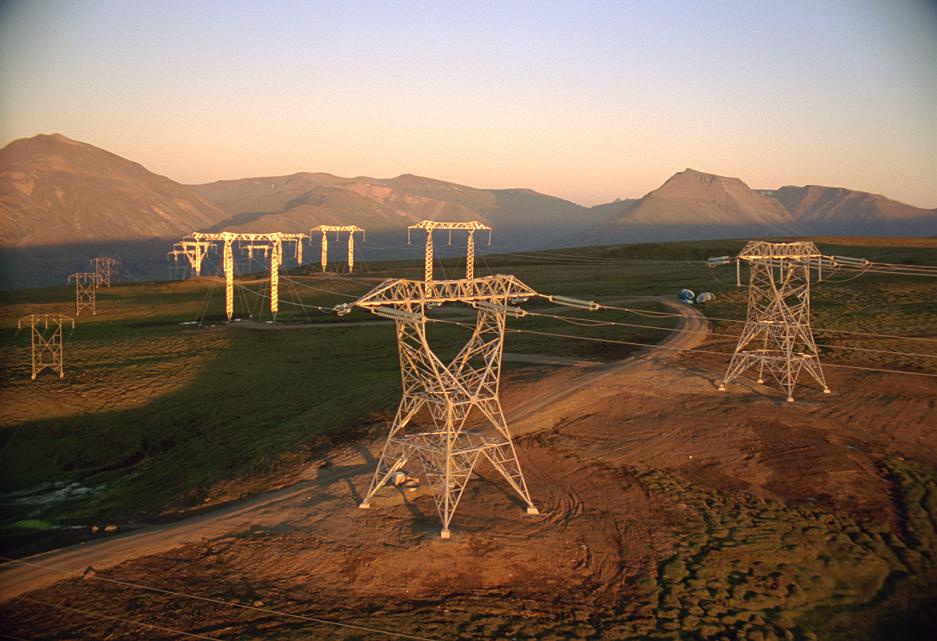 How much unspoiled nature should we preserve and what do we sacrifice for clean, renewable energy? Dreamland gradually turns into a disturbing picture of corporate power taking over small communities.

Dreamland is a film about a nation standing at cross-roads. Leading up to the country’s greatest economic crisis, the government started the largest mega project in the history of Iceland, to build the biggest dam in Europe to provide Alcoa cheap electricity for an aluminum smelter in the rugged east fjords of Iceland. Today Iceland is left holding a huge dept and an uncertain future.

The idea is that geothermal energy can be transported across Iceland to the UK:

A 750-mile undersea cable could supply UK homes with geothermal energy from Iceland's volcanoes within 10 years. 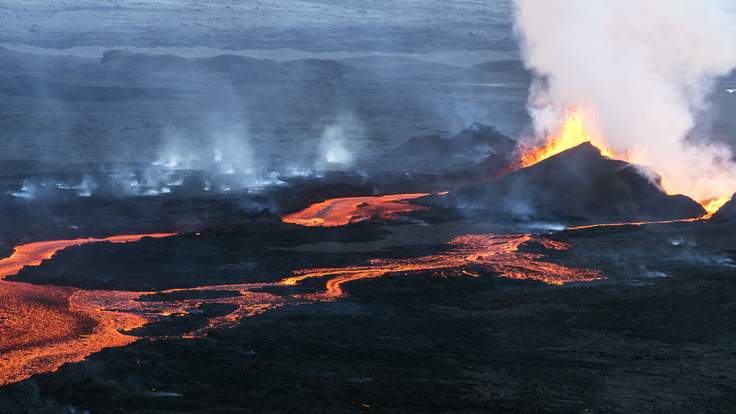 British homes could be powered by Iceland's volcanoes under a plan to run a 750-mile electricity pipeline under the sea. The multi-billion pound "interconnector" could allow geothermal energy from Iceland to be pumped directly to Britain.

On a visit to Iceland, David Cameron, who is the first British Prime Minister to visit Reykjavik since Winston Churchill in 1941, will announce a task-force has been established to examine the feasibility of the project. If there is a successful outcome then the giant hydro-electricity cable between the two countries could be built within a decade.

Iceland gets around 95% of its power from hydro and geothermal energy. Officials said that establishing a long-term source of renewable energy for Britain would provide greater security. There are continuing threats of power blackouts because of the lack of energy capacity. Homeowners were warned earlier this year they could face higher energy bills again this year because of the closure of some power stations.

Mr Cameron has been holding talks about establishing closer energy ties with his Icelandic counterpart Sigmundur Davio Gunnlaugsson ahead of the Northern Future Forum which joins the UK with leaders from Scandinavia and the Baltic states. Ministers have been in talks with Iceland over the possibility of harnessing the country's geothermal power since 2012.

It's all about interconnectivity: 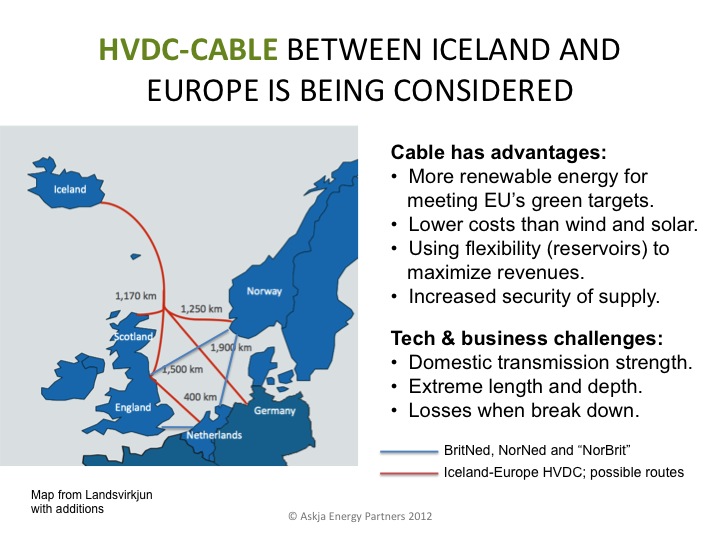 Alongside with various organisations across Iceland, like Iceland Nature Conservation Association and the Icelandic Travel Industry Association (to name a few), the songwriter has added her name to a list of supporters for the Hálendið campaign. The campaign aims to protect the central highland of Iceland by establishing an Icelandic owned national park. That would prevent the highland from extensive development that’s already planned for the region, writes Dazed. 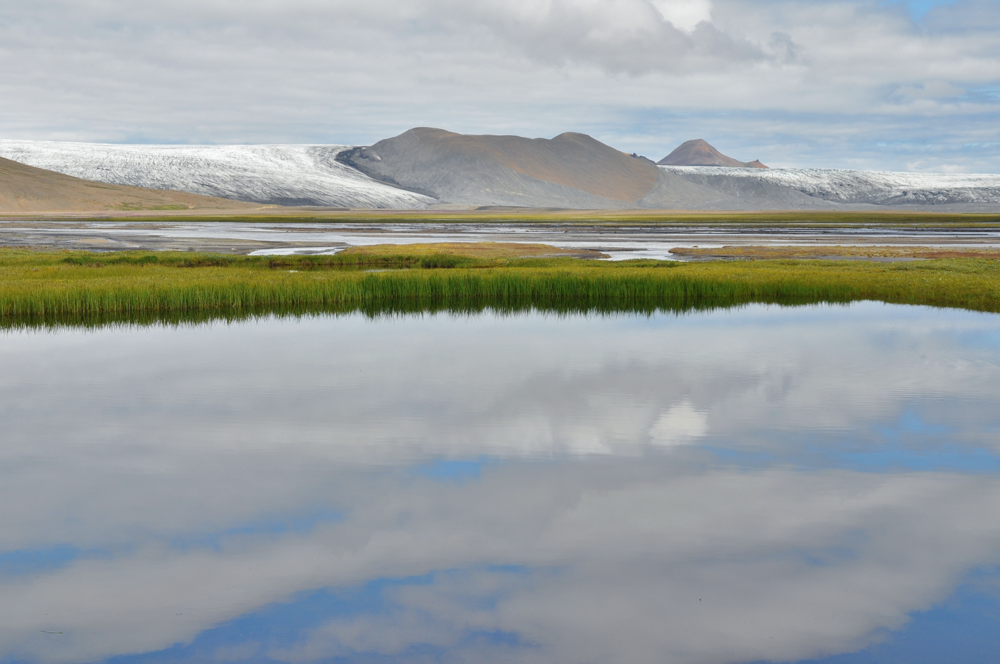 Does the development of renewables really have to be so massive in scale - or can this be done locally and on a smaller scale?
Futures Forum: "In most other countries, renewable energy projects are owned by local communities: and so there's a huge groundswell of support for them."
Futures Forum: "Energy economics are changing rapidly and so the momentum is towards decentralised, smart and flexible energy systems."
Futures Forum: The future of tidal power... in Sidmouth

Check out this evening's Costing the Earth on Radio 4:

From Iceland with Love

The Ice Link interconnector would link Iceland's cheap and carbon free electricity from hydro and geothermal to the UK.

It could provide the equivalent power of a medium sized power plant through a copper cable laid under the sea between the two countries.

Crucially the power would be reliable and available when other renewable sources such as wind and solar are not.

However, as Tom Heap discovers when he visits the land of fire and ice, environmental campaigners like Bjork fear that this green solution for UK homes could create a need to develop into the pristine wilderness of Iceland's Highlands.

Should we pursue our global climate goals even if it has the potential to affect untouched and fragile landscape elsewhere?

Tough decisions for Iceland and for us all.