Friday's Herald front cover was probably not an April's Fool - although many might see the latest proposals as a bit of a joke: 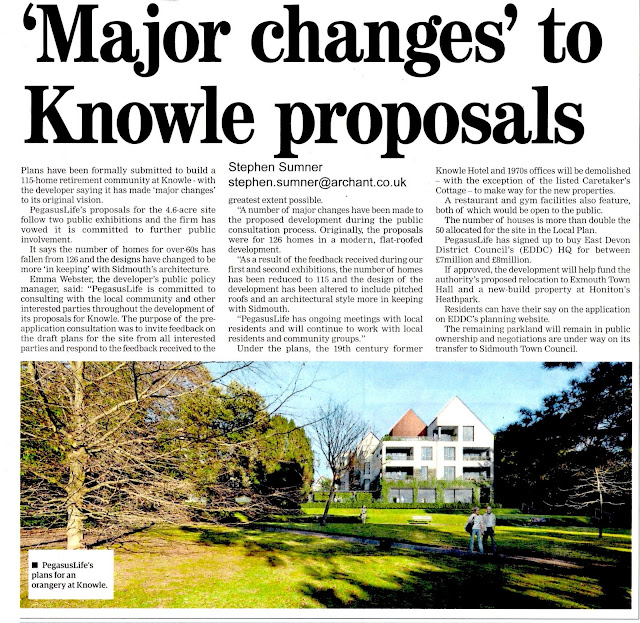 Indeed, this is the view of Save Our Sidmouth who posted this comment earlier today:

After public feedback on the unsuitability of its original plans, Pegasus Life has told the Sidmouth Herald that “the design of the development has been altered to include pitched roofs and an architectural style more in keeping with Sidmouth”. But the tall 4-storey building pictured on the Herald’s front page (Friday 1st April 2016) shows no apparent trace of “the architectural style” which embellishes Sidmouth’s uniqueness.

The justification for more than doubling the number of 50 homes allocated for Knowle in the Local Plan, is not made clear. The developer, Pegasus Life, now proposes 115 homes, slightly less than the 126 they had initially proposed.

If the now formally submitted plans are approved, a proposed private retirement complex will replace what have been publicly-owned buildings at Knowle. The footprint of the new buildings will exceed that of the current buildings, extending into the upper terraces, arguably the best part of the historic parkland.

For reference, the ‘architectural style’ of the present Knowle building (a former hotel), is pictured below, showing how it blends into the landscape, and the south-facing facade and upper terraces.

The new building may be considerably higher than the present one, as the Futures Forum blogspot illustrates: http://futuresforumvgs.blogspot.co.uk/2016/03/knowle-relocation-project-far-more.html

‘Major changes’ to Knowle proposals | Save Our Sidmouth

Meanwhile, the District Council is trying to juggle its own timetable: 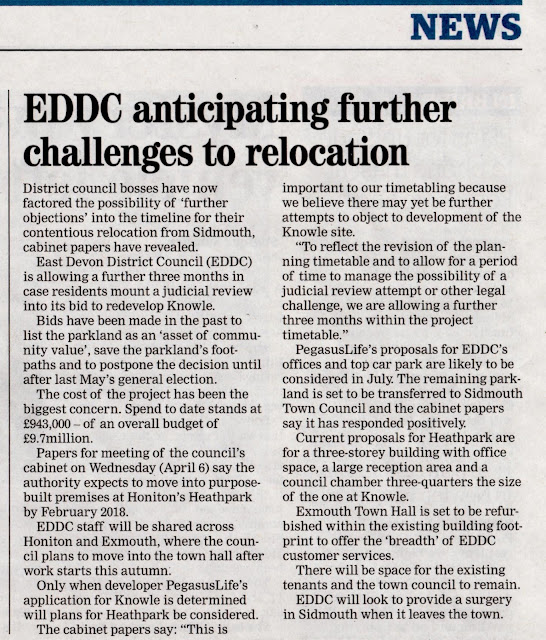 A year ago, the District Council was still reiterating its own calculations:

THE go-ahead has been given for the £10m relocation of East Devon District Council’s headquarters at Sidmouth to Exmouth and Honiton amid a tide of controversy and a raft of objections and a looming 20-year loan repayment. (1)

After a lengthy and at times heated debate, councillors gave approval to the move at their full council meeting on Wednesday, March 25, paving the way for the for sale sign to be erected at the site of the former Victorian hotel which the district authority has resided in for four decades. The move, to purpose built offices at Honiton and Exmouth Town Hall, is expected to be completed in two years by mid 2017. (2)

Council officials including deputy chief executive Richard Cohen and council leader, Councillor Paul Diviani, supported by the council’s independent external auditors, Grant Thornton (3) and internal auditors the South West Audit Partnership, have long maintained that remaining at Knowle would be a drain the council’s resources whereas a move would be more cost effective for the tax payer.

Councillors were told that over a 20-year period the district will be £2.8m better off if the council moves, compared with £3.9m worse off by staying and carrying out minimum investment works at Knowle. (4)

Ahead of the decision, the council resolved to sell 1.8 hectares of land at Knowle, including the area currently occupied by buildings and asphalt car parks, plus 14 per cent of the remaining parkland including the upper terraces, to retirement homes developer Pegasus Life Ltd for around £8m. (5)

The refurbishment needed at Exmouth Town Hall is expected to cost the council around £1m and around £7m to build the offices at Honiton. (6)

Knowle has high annual energy costs of £83,900 a year compared to a predicted energy cost for Honiton/Exmouth combined of £33,700 per year. (4)

In addition to the funds generated from the sale of its existing headquarters, the council would need to borrow £2.1m over 20 years to fund the move. (1)

A raft of concerns were presented to councillors at last night’s meeting...


Several points emerge when a year ago is compared to today:

(1) Can we be sure that the project will cost 'only £10m? Tory council insists costly move of East Devon Council HQ is a money saver | Western Morning News

(5) Futures Forum: Knowle relocation project: Pegasus as preferred bidder... However, its proposals for ‘one of the finest coastal properties’ in South Devon have been rejected by Dawlish Town Council 'on the grounds of overdevelopment'. and Futures Forum: Knowle relocation project: deciding to sell >>> 'overage' and the dangers of selling Knowle short

(7) Costs for the relocation project so far amount to almost £1m - whereas the 'minimum spend' on Knowle would have been £1.5m.

And there are all sorts of other issues:

The Cabinet is to discuss the latest on Knowle this Wednesday:
Update on key decisions for Knowle , at April 6th Cabinet meeting. | Save Our Sidmouth

With the full agenda here:
060416-combined-cabinet-agendasm.pdf