Because there are fears that the UK is 'going backwards' when it comes to climate change:


Adam Vaughan and Fiona Harvey
The UK has given up its leadership role at the UN climate talks in Paris and is “moving backwards” with a string of cuts to green domestic policies, according to Prof Anne Glover, the former chief scientific adviser to the European commission.
Her comments were endorsed by business people, NGOs, an ex-diplomat and two former ministers who are worried that the government is squandering the UK’s international standing on climate issues.
David Cameron told a gathering of world leaders at the Paris climate talks last week that they would have to answer to their grandchildren if they failed to agree a deal that stopped dangerous warming. But since taking power in May his government has been criticised for taking the axe to a series of green policies.
“The UK does not have a leadership role, nor is it regarded to have a leadership role in Brussels,” said Glover, who is vice-principal of the University of Aberdeen. “If we don’t lead, who does? To me it looks like we’re moving backwards.”
UK has 'lost world climate leadership role' by axing domestic green policies | Environment | The Guardian

Over the weekend of 7th and 8th May, there will be several events taking place around the country:
Local Events - Going Backwards on Climate Change | Campaign against Climate Change 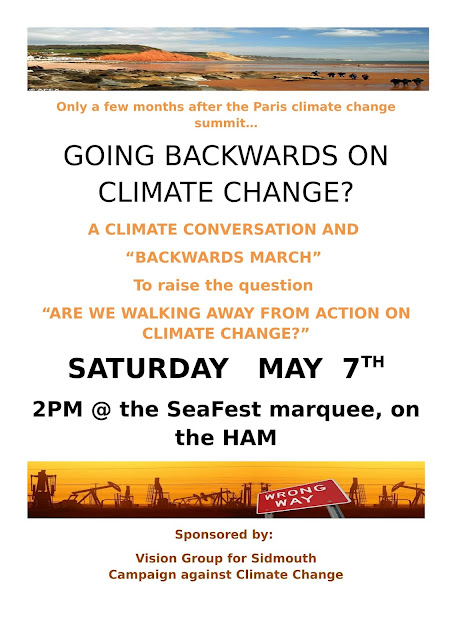