"Sorry, It's Not My Department" >>> Insider's guide 'emphasizes the problems within councils and explains why the public are NOT getting the value for money they should.'

The committee looking into the functioning of the FOI Act has issued some idea of where its deliberations are going when it comes to local government:
Futures Forum: The Freedom of Information Act >>> 'We appreciate that some public authorities are concerned by the burdens imposed on them by the Act and the associated costs. However, the introduction of new fees would lead to a reduction in the ability of requesters to make use of the Act'

The following message has just been received from the author of a new book out on dealing with councils:

As an individual with a direct interest in the workings of local government, I wanted to make you aware of my newly revised book that lifts the lid on working as an officer in local government. Probably the first of its kind to be published in the UK and hopefully something that will be of interest you.

"Sorry, It's Not My Department", highlights the problems encountered (and caused!) by those working in town halls throughout the country. The book uses real life case studies and anecdotes to emphasize the problems within councils and explains why the public are NOT getting the value for money they should.

Before you start thinking this is just a sales pitch I want to make it clear that I am NOT here to make a fortune from the book. Instead I want to raise the public interest in local politics and lift the lid on what REALLY happens in town halls.

I can't put a hyperlink into this format but you can search for "Sorry It's Not My Department" on Amazon to learn more about the book (Kindle and hard copy) and read some of the reviews. Alternatively look at my profile on What Do They Know and follow the link.

My hope is that you will feel able to share this information with any of your contacts/ colleagues who you feel may be interested.

If you would like to discuss some of the issues raised in the book then please feel free to contact me.

Sorry, It's Not My Department: Where the money really goes in your town hall and the ways public services can be improved.: Amazon.co.uk: Rob Tape: 9781512059182: Books

And this piece has just been published on-line today:

Posted on April 12, 2016by insidecroydon 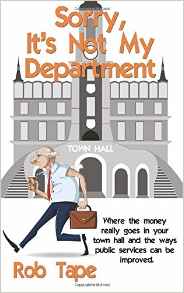 Local government worker ROB TAPE decided to write a book based on the experiences of his council work career. He called it Sorry, It’s Not My Department. He then wrote to all 70 of Croydon’s councillors. He received not a single reply.
Here, Tape outlines the background to a book which carries the sub-title: ‘Where the money really goes in your town hall and the ways public services can be improved’
After working for various councils across the country for many years, I decided that it was time to write down my experiences about what goes on behind the closed doors of your average town hall. At first I thought it would make a great sitcom – in fairness, that might come next – but instead I opted for a book outlining what it is really like working for some of these public sector leviathans. Sorry, It’s Not My Department is my first published book and covers my career working in the lower and middle echelons of a handful of different local authorities.
The book is aimed at two audiences. The first is any member of the population who has had experience of dealing with their local council. Many of the people who have done so have commented that the title of the book basically says it all. The second target audience are those people who make the decisions in town halls, the councillors and senior officers. My hope is that they will see that , of Croydon and beyond.
The book covers a number of areas:
• Unnecessary and wasteful services you didn’t know you had or needed
• Public consultation overload
• Writing strategy documents and policies for the sake of it
• Needless marketing, PR and events
• The ambiguous role of councillors
• The culture of jobs before public service
• Managing public sector cuts
• Perverse targets that actually decrease the quality of service
Sorry, It’s Not My Department also offers solutions. Rather than just being critical of existing systems and management approaches, it also tries to offer a way forward that will help make boroughs such as Croydon better places to live and work.

One area I explore is helping to make councillors more effective, moving away from party politics at the local level and instead focusing on high quality, independent individuals being elected to a more streamlined political structure.

The book also suggests other improvements, from reducing wasteful services through to having a greater emphasis on quality rather than quantity, and from removing the  “gravy train” for staff through to generating a more positive atmosphere of public service.
My hope is that the book starts a wider dialogue among the decision-makers in councils. But more importantly, that anyone who is interested in how local government really operates can learn a little more about where their hard-earned tax money is actually spent.
Response to the book to date has been mixed. The public seem to actually quite like it and are positive about the messages it contains. On the other hand, councillors and council managers seem to be somewhat quieter. For example after sending information to more than 10,000 councillors across the country, most – including all 70 of Croydon’s councillors – have ignored my correspondence entirely.
That being said the number of independent and smaller party councillors who have been in touch has been impressively high in comparison to those from the main two parties. Read into that what you will.
But given that it is the public who deserve a clearer picture about council management, it is the public that I want to read the book.

Whistleblower’s book ignored by all Croydon’s councillors | Inside Croydon
.
.
.
Posted by Jeremy Woodward at 14:40