A solution to our housing problems: build more council houses

There really are lots of good ideas around social housing out there
- as well as plenty of not so good ideas:

You would expect the Mirror to support the idea from a political standpoint:
There is a solution to the housing crisis: build more council homes - John Mills - Mirror Online

This is from a real estate professional:

How to solve the housing crisis in five years

Modular technology means we could easily build over 500,000 homes a year (Source: Getty)

The UK housing market is failing millions of people. It produces far too few homes, and then offers them at unaffordable rents and prices.

In Japan, the modular future has already arrived. Toyota can build you an elegant modular house within 45 days. They will guarantee it for 60 years, and it will last 100. It only costs about £70,000 to make a semi-detached modular house. Flats are even quicker and cheaper – one Japanese factory can manufacture 6,000 flats a week.

The UK needs to build about 250,000 homes a year, but we only manage 100,000 or so. We should be ashamed. Modular technology means we could easily build over 500,000 homes a year and eradicate our housing deficit.

So, we know how we can achieve the scale and speed of construction to solve our housing problem. But who should do it?

There is an obvious candidate. The government will pay £24bn (the build-cost of 340,000 modular semis) in housing benefit this year, effectively guaranteeing private landlords’ rent. Housing benefit traps the government into a loss-making residential outsourcing deal that is poor value for taxpayers.

It doesn’t have to be like this. During the twentieth century, the UK housing market was a mixed micro-economy. Councils built about 30 per cent of homes and helped tame the housing shortage. It was a mass solution for mixed communities.

In 1981, one third of Londoners lived in council housing, and one third of council house tenants were earning above average income. Council housing created an agreeable environment for millions of working and lower-middle class families and, despite some problems, was a civilised solution to the fact that private markets alone struggle to deal with housing deficits.

Rather than throwing good housing benefit money after bad, the government should ignite a vast and visionary programme of state-sponsored modular home building. By using Japanese technology, the government could address the housing problems of millions of ordinary working people and receive an income in return.

Macmillan’s 1950s One Nation solution (continuing Bevan’s 1940s work) is a model. He adopted a balanced, mixed market approach to housing, combining state housebuilding with private housebuilder enterprise. Building restrictions were loosened and licenses abolished. Multi-tenure solutions were nurtured and local authorities empowered to build and borrow. As Macmillan said, “the houses were built” – 275,000 in 1952, 318,750 in 1953.

Macmillan believed in public housing (in partnership with the private sector) because he wanted a housing market that worked for everyone. Our divided nation needs his One Nation housing vision again.

But the government is too indebted to deal with the housing deficit on its own. This immense problem demands a solution of matching scale. The public and private sector must work as one to overcome it.

I would suggest a gigantic joint-venture platform where the UK pension funds and government invest together to launch a transformative programme to build millions of council, social, build-to-rent, shared equity, and (genuinely affordable) build-to-sell homes. Because we can only end our housing famine by building millions more homes of every tenure.

The government would need to create an investable proposition for the institutions. But this should be achievable: housing provision is ideally suited to their need for long term liability matching returns.

The house builders and housing associations cannot resolve the UK’s housing shortage without help (and it is not their job to). But our government and institutions can work alongside them to deal with it.

Using modular housing, mass council home building, and imaginative strategic partnerships between government and institutions, we can again house our poor and vulnerable and the millions of under 40s the market currently lets down.

If we don’t grasp this opportunity, we will be condemned to house only the rich and the chronically over-mortgaged. We will also have to face our grandchildren, when they ask us why we failed to house them.

How to solve the housing crisis in five years | City A.M.

Because the alternative seems to be councils investing in property speculation:
Futures Forum: District Council local housing company >>> "the ‘huge risk’ in speculating on the property market"
Futures Forum: Local Housing Companies >>> 'It is early days for this new model of house-building, but with their seeming commitment to quality design, the omens are promising for architects seeking work in the sector. Whether this model can bridge the gap in affordable housing provision remains to be seen."

Even though back in the 1970s, its current HQ housed several council flats:
Futures Forum: Knowle plans: flats

It could chose to invest in social housing, but instead, notes the EDW blog earlier today, it prefers to spend tax-payers money on something else:

HOW MANY COUNCIL HOUSES EQUALS A NEW HEADQUARTERS?

The £10 million being spent on the new EDDC HQ could pay for 80 new council houses in our district.

Yes, EDDC will say it will SAVE money.

BUT if EDDC had properly maintained Knowle over the last 10+ years as it should have, they would not have needed to move.

This is in light of a report out today:

Exclusive: Expert estimate suggests figure local authorities are on course to lay out this year could instead be used to fund 8,000 council homes 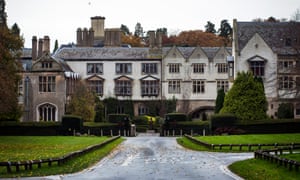 Coombe Abbey hotel was bought by Coventry city council, a deal that prompted protests. Photograph: David Sillitoe for the Guardian

Councils are on course to spend more than £1bn on commercial property this year, investing more in shopping centres, country clubs, hotels, offices and other assets than in building council houses, figures show.

Town halls in England and Wales spent £758m buying up commercial property in the first eight months of this year, according to property market data from Savills, but are only building 1,730 council houses a year, government figures for 2016-17 show.

The £1bn councils are on track to spend could produce more than 8,000 new council homes, an expert estimate suggests. Earlier this year, Downing Street indicated that amount could deliver 12,500 homes.

While no nationwide figure is available for the total cost to the taxpayer of council houses built in 2016-17, expert estimates putting the cost per property at up to £125,000 would suggest local authorities spent in the region of £250m.

About 77,000 households in England and Wales are living in temporary accommodation and 1.2 million are on council waiting lists.

Council leaders are demanding that the government lifts the cap on borrowing for housing in the budget next week.

Councils to spend £1bn on commercial property amid housing shortage | Society | The Guardian
.
.
.
Posted by Jeremy Woodward at 14:15