Against charity: a critique of food banks

If it weren't for charitable donations and charities themselves, we wouldn't have the network of food banks which help out people in need - especially at this time of year:
Futures Forum: Festive hampers from the Sid Valley Food Bank

They are very busy all over the country:
Christmas at a food bank - sadly the busiest time of the year as donated tins and packets replace turkey and trimmings - Grimsby Telegraph
This is what it's like at a foodbank just days before Christmas - Manchester Evening News
Derby food bank gives out TEN TIMES more food parcels than it did in 2011 - Derby Telegraph

They are not universally welcome - with this overview from Wikipedia; 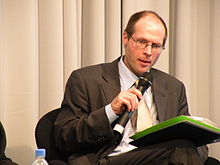 Olivier De Schutter, a senior United Nations official, has cautioned Europe against allowing food banks to become a permanent partial replacement for welfare provision, as is the case in the U.S. and Canada.
The rise of food banks has been broadly welcomed. Not only do they provide a solution to the problem of hunger that doesn't require resources from the state, but they can be viewed as evidence of increasing community spirit and of active, caring citizenship.
In the UK for example, Patrick Butler, society editor for The Guardian, has written that the rise of foodbanks has been most enthusiastically welcomed by the right, but also by many on the left of the political spectrum, who were often "nervously excited" about them.[102]
However, there has been considerable concern expressed by some researchers and politicians. Drawing on the United States's experience after the rapid rise of food banks in the 1980s, American sociology professor Janet Poppendieck warned that the rise of food banks can contribute to a long-term erosion of human rights and support for entitlements. Once food banks become well established, it can be politically impossible to return responsibility for meeting the needs of hungry people to the state. Poppendieck says that the logistics of running food banks can be so demanding that they prevent kind-hearted people from having time to participate in public policy advocacy; yet she also says if they can be encouraged to lobby politicians for long-term changes that would help those on low income, they often have considerable credibility with legislators.
As of 2012, senior US food banks workers have expressed a preference to remain politically neutral, which political activists have suggested may relate to their sources of funding.[16][102][103][104][105]
Rachel Loopstra from University of Toronto has said foodbanks are often inefficient, unreliable and unable to supply nutritional food. She said a survey in Toronto found that only 1 in 5 families suffering from food insecurity would turn to food banks, in part as there is a stigma associated with having to do so.[102]
Elizabeth Dowler, Professor of Food & Social Policy at Warwick University, said that most British people prefer the state to take responsibility for helping the hungry.
Hannah Lambie-Mumford, from Sheffield University, echoed the view that some users of food banks find having to ask for food humiliating, and also that food banks volunteers should be encouraged to advocate for long-term solutions to the underlying causes of poverty and hunger.[16][43][62]
Olivier De Schutter, a senior United Nations official charged with ensuring governments honour their obligation to safeguard their citizen's right to food, has expressed alarm at the rise of food banks. He has reminded the governments of the advanced economies in Europe, Britain and Canada that they have a "duty to protect" their citizens from hunger, and suggested that leaving such an obligation to food banks may be an abuse of human rights.[22][106][107]

But the political issues have been addressed far and wide:
How to crack Britain’s destructive addiction to food banks | City, University of London
The Poor Need a Guaranteed Income, Not Our Charity · The Walrus
Corporate food charity keeps hunger off political agenda - Canada without poverty

But this week, Everton manager was very critical - without being 'political': 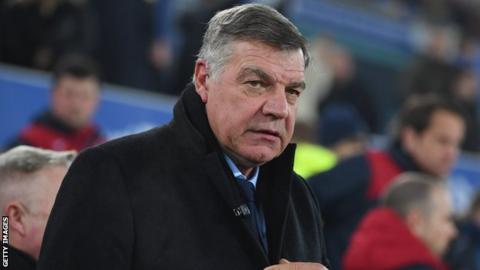 Sam Allardyce took over at Everton at the end of November

Everton manager Sam Allardyce has branded the growing number of food banks a "disgrace" and accused Britain of "going back to the Dark Ages".

Toffees staff and players visited a food bank in Liverpool this week. Fans of both Everton and Liverpool have also been donating to collections.

"It's extremely depressing that a country of this magnitude and where it thinks it lies can allow so many food banks to be operating in this country," said Allardyce. The 63-year-old praised the club's fans and those working in the food banks but was critical of the fact that so many people are being forced to use the facilities.

"But for the goodwill of the Liverpool people - and the fans have a big say in the food bank that we went to in helping donate food for people less fortunate - I think it's going back to the Dark Ages to allow it to continue," he added. "And it's not only allowing it to continue, it's growing at a rapid pace where people who are in work, not just on benefits, cannot afford to live at a decent level and have to go to a food bank to feed themselves and their children.

"I think it's incredibly sad that a country like ours has allowed that to happen and will continue to allow it to happen. I think it's a disgrace - apart from the people who actually work in it. They're out of this world."

This piece in the Telegraph highlighted how food banks make use of food - which would otherwise be thrown away: 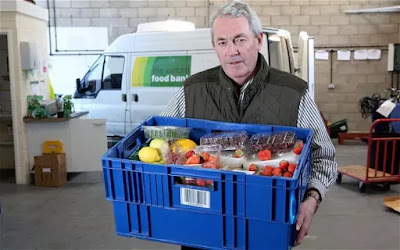 'The statistics for waste are an affront to common sense and human decency,' says Robin Aitken Photo: John Lawrence

In fact, I believe, they are a good thing with the potential to play a constructive long-term role in the wider campaign for sustainability. There is a striking irony in the current debate over food poverty which is that at the same time as people agonise over how to feed the poor, thousands of tons of wholesome food are thrown away every day.

The statistics for waste are staggering – and an affront to common sense and human decency. In Britain, 15 million tons of food is wasted annually. Nearly half is thown away by us in our own homes, but farmers, manufacturers and retailers account for the rest. In a welcome gesture of openness, Tesco last month admitted that in the first six months of 2013, the company threw away nearly 30,000 tons of food. There is no legal requirement for companies to publish this kind of data, but you can bet that the other big retailers do no better.

So wouldn’t an impartial observer looking at food poverty and food waste wonder why it is that a society like ours cannot organise itself so that “surplus food” (the preferred industry term) is used to feed the hungry? It seems obvious.

What is more, it is already being done. In Oxford, a food bank was started up four and a half years ago, based on a sustainable model. Fresh food – bread, fruit and vegetables and dairy produce – is collected daily from local wholesalers and retailers and then distributed to charities in the city and surrounding towns. The organisation – which is run by about 100 unpaid volunteers – has grown rapidly to the point where today it is giving away more than £2,000 worth of food a day to nearly 50 local charities. In bulk terms, that’s more than three tons a week, worth in cash terms in a full year about £750,000.

As an example of the much-disparaged “Big Society”, it could hardly be bettered. The volunteers – who span the age range from student to pensioners, come from every background and represent every political hue – have co-operated to build an organisation with local roots, serving local needs, without any subsidy from state sources whatsoever. And which is saving food from being wasted. Collecting store-cupboard groceries and giving them away to families is a decent thing to do. The Trussell Trust will get a stockpile of food to give to poor families.

However, when people buy groceries to donate to food banks, they also increase supermarket sales. And while shoppers are encouraged to buy a bit more to help the needy, around the back of every store, every day, good food will be thrown away. If the big grocery chains are sincere about wanting to combat food poverty and serious about reducing food waste, does the Oxford project not offer a compelling solution?

The equation really is this simple: food poverty plus food waste can cancel each other out. All that’s needed is to match need with surplus.

On the Trussell Trust website, executive chairman Chris Mould, says that food poverty in a rich country is a national scandal. He says the situation is getting worse and lambasts the Government for the lack of a policy response. In doing so, the Labour-supporting Mr Mould is clearly making a political point. But this kind of argument reduces food banks to mere ammunition in the wider economic debate. Given that food banks need the support of people with every political allegiance – and none – the last thing they need is to become politicised.

With a little official encouragement, some determined action by the retailers and food industry, combined with local initiatives, every town and city in the country could have a sustainable food bank on the Oxford model. That would be a truly creative policy response that would make a lasting contribution to combating food poverty and reducing waste. And, because there will always be poor people who don’t get enough to eat, regardless of the state of the economy, it would lay the foundations of a more intelligent approach to waste and hunger in the future.