Of reindeer and the Sami way of life

If you want to get rid of an indigenous community because they are in the way of a spot of critial mining, allegations of sexual abuse is always a good start:
Futures Forum: The impacts of the mining industries
John Pilger: Under cover of racist myth, a new land grab in Australia | Opinion | The Guardian
The secret country again wages war on its own people - John Pilger
Icarus Films Releases 'Utopia' - A Scathing Critique of the Apartheid Deep Within Australian Society
A Decade On, The Fraud Of The NT Intervention Is Exposed - New Matilda

Things are not quite so brutal in Norway:

“It’s not so much the fact that the Sami have a cultural problem which we should clean up, but the fact that no one has listened to them...”

But there are huge pressures on the Sami community in the North.

Whether it's over mining:
Government gives thumbs up for mining company, will be allowed to dump wastes in Arctic fjord | The Independent Barents Observer
Mining threatens to eat up northern Europe’s last wilderness | Environment | The Guardian

Or 'the environment':
Sami reindeer herders battle conservationists and miners to cling on to Arctic culture | Global development | The Guardian

Or resources generally:
Without a Treaty to Share the Arctic, Greedy Countries Will Destroy It - Scientific American

Or how they are perceived:

Siri Hermansen’s video “Sorry” (2014) draws upon King Harald’s official apology to the Sami people at the opening of the Sami Parliament in 1997. Apologizing for wrongs inflicted by Norwegianization — a policy of forced assimilation that prohibited Sami languages and persisted through most of the 20th century — he explained that the Norwegian state is built on the territory of two national groups. Yet conflict persists between the indigenous peoples’ right to land and the interests of mining companies who pollute Sami land and waters — Norway is one of only four countries that allows the dumping of mining waste at sea.

And reindeer are at the centre:
Reindeer Resistance: Indigenous Herders Protecting Way of Life - Newsweek

A problem being that they tend to get in the way of things like trains which run along their migration routes:
Norway to put up fence to stop reindeer slaughter - The Local
Norwegian reindeer tragedy as 106 killed by freight trains - Telegraph

Here is a pretty graphic exposé:


Maret Anne Sara has hung a curtain made of 400 bullet-ridden reindeer skulls in Oslo, Norway 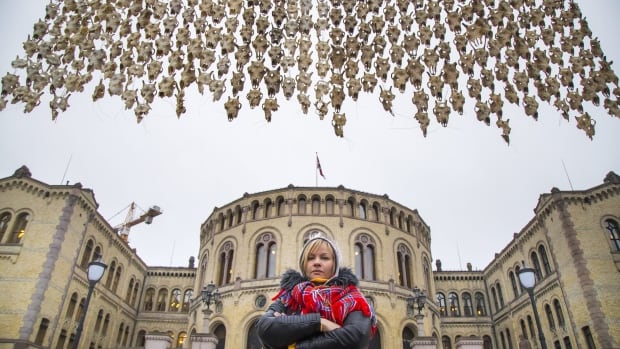 An artist from the Indigenous Sami community in Norway's Arctic region is drawing attention to the country's policy to reduce the reindeer population. In a display outside the country's parliament in Oslo, Maret Anne Sara has hung a curtain made of 400 bullet-ridden reindeer skulls.

She told Norwegian broadcaster NRK on Wednesday that the government's reindeer-reduction policy is "totally wrong and unfair." She was not immediately available for comment on Thursday. The policy is intended to prevent overgrazing of the tundra where Norway's estimated reindeer population of 220,000 live.

She is supporting her brother, Jovsset Ante Sara, who has twice successfully legally challenged the order for him to cull 41 of his 116 reindeer. He said he can't make a living with that scale of cull. The government is appealing. 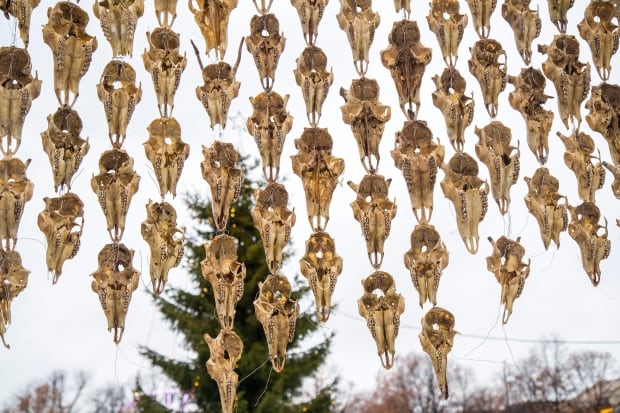 As this weekend's i-newspaper reports:

A reindeer herd walks on the beach in Jarfjord, Norway. Photo: Getty

He can handle the long, dark winters in -30C temperatures, but young reindeer herder Jovsset Ante Sara has found the Norwegian authorities a far tougher threat to his traditional Sami lifestyle, roaming pasture lands far north of the Arctic Circle.

After a four-year legal battle to prevent a government-ordered cull of his reindeer, the 25-year-old this week journeyed 1,000 miles south to Oslo to discover whether judges at Norway’s supreme court, the country’s highest legal authority, agree with the previous decisions of lower courts allowing him to keep his 116 animals.

The Ministry of Agriculture’s order to reduce his herd to 75 would provide him with an annual income of only €3,000 (£2,640), far short of a decent living in Norway.

However, at stake is not merely whether Jovsset can avoid bankruptcy, but also the viability of the traditional Sami way of life for a younger generation. For the herdsman, the result will also send a signal to the Sami about their place in Norwegian society.
‘A way of life’

“I’m fighting for our culture, for our traditions,” said Jovsset, during a break in the two-day supreme court hearing. “Reindeer are not only a business for me, but a way of life. That’s how we live, that’s what we love. Every part of our life is centred around reindeer. If they take my herd, they are taking my life.”

Despite being Scandinavia’s only indigenous people, the Sami have faced discrimination and abuse for centuries. Their plight has been compared to that of American Indians, but rather than establishing reservations for Sami, the region’s governments have, in the past, sought to absorb them.

In Norway, previous generations were forced to attend compulsory boarding schools, where their native tongue was forbidden as part of the country’s “Norwegianisation” policies. Samis have been given more autonomy since then, but irretrievable damage has been done to their language, which is spoken only by a minority.

In 1997, Norway’s King Harald V publicly apologised on behalf of the nation for its treatment of the Sami. Now, the Samis have their own parliament, and are also represented in Norway’s parliament. But only a few Sami still herd reindeer.

Their traditional way of life, weakened by “Norwegianisation”, is facing further serious threats from mineral mining, wind farms and other large-scale commercial projects that are encroaching on reindeer herding grounds.

“We’re having to fight for our rights to live as reindeer herders,” said Jovsset. “We’re losing a huge amount of land to big projects authorised by the state. They are investing large amounts of money into our land, selling the rights to mining to big companies, reducing the area that we can use, making life more difficult. They want to reduce the reindeer and the number of reindeer herders.”

In 2013, Jovsset was informed that under an obligatory cull of the reindeer population – the Norwegian government declared there were too many animals, leading to severe environmental damage – he would have to lose a third of his livestock. It would make reindeer herding unsustainable, he concluded, and he told the authorities he would defy the order.

Reindeer are pictured in Kautokeino, a town in Finnmark county, located in the northeastern part of Norway. Photo: Getty

In March 2015, at Indre Finnmark district court in the northern town of Tana, Jovsset successfully argued that such a draconian cull contravened his property rights under the European Court of Human Rights. The following year, Norway’s Ministry of Agriculture challenged that ruling at the Halogaland Court of Appeal in Tromsø, which again found in Jovsset’s favour after a three-day hearing.

Outside the courts at each stage of the legal battle, Jovsset’s sister, Maret Anne Sara, 34, an acclaimed Sami artist and author, has presented an art installation featuring hundreds of reindeer skulls to highlight the threat to traditional peoples. The case has provoked an outpouring of support for the young herdsman among the Sami, who organised a fund to pay for lawyers before Jovsset was granted legal aid.

“I’ve had so much support, it’s been really surprising,” he said. “I had no idea that it would have this effect. The Reindeer Herders’ Organisation have got behind me and the leader of the Sami parliament is coming to Oslo to be in court. It just shows that people feel we are not being heard, that the government is interfering in our traditional way of life.”

The supreme court’s decision is expected in two or three weeks, and if it rules against Jovsset, the European Court would be his final option.

Whatever the outcome, he is anxious to return to his home in Kautokeino, where he spends only three weeks of the year, to ready his reindeer for the 200-mile journey to their traditional winter pasture on the Finnish border.

“I’m with the reindeer almost the entire year, it’s where I love being and where I belong,” said Jovsset. “This is how I want to live, and I don’t see why I should change. My family has done this for centuries. Why should I stop?”

One man's fight to save his way of life, and his reindeer, from being culled
.
.
.
Posted by Jeremy Woodward at 01:00