So too has the Environment Secretary:
Michael Gove ‘haunted’ by plastic pollution seen in Blue Planet II | Environment | The Guardian

And he's putting pressure on Councils:
Michael Gove declares war on the Britain's plastic rubbish with new recycling rules for councils - The Sun

New national rules are set to end the postcode lottery on recycling. In a radical four-point plan, the Environment Secretary wants to tie councils to common guidelines that will make recycling less confusing for millions. At present, town halls are free to decide what they recycle.
A recent Daily Mail investigation found that there is a huge disparity on plastic waste, with some local authorities collecting every type – and some taking none at all. Michael Gove has revealed he is considering nationwide standards to ensure that – as far as possible – councils collect the same items. The plan is a vindication for the Mail's Turn The Tide On Plastic campaign, which has highlighted the blight of plastic pollution across the world.
The strategy to address the crisis aims to:
A centralised standard on which types of recycling councils have to collect would help achieve at least two of these aims

Last night a spokesman for the Department for Environment, Food and Rural Affairs (Defra) told the Mail: 'The Secretary of State wants to make recycling as easy as possible for households. That is why we will look to accelerate making local authority recycling schemes as consistent as possible through the resources and waste strategy.'
Campaigners blame the postcode lottery for England's woeful recycling rates – recently ranked 18th in the world, behind countries including Italy and Germany. Almost 8 million families cannot recycle everyday plastics because councils refuse to pick them up.
Recycling charity Wrap says more than a quarter of English councils fail to collect plastic tubs, pots and food trays – despite labels saying they are 'widely recycled'. Meanwhile, just 7 per cent accept plastic carrier bags.
Mr Gove believes Britain will be unable to improve the situation unless recycling is made less confusing.

500 tons of plastic used to wrap cucumbers every year

The 500 tons of plastic used to wrap cucumbers each year should be axed, a member of the House of Lords has said.
Lord Hayward has called on supermarkets to follow their European counterparts which he says sell more vegetables unwrapped. He said he had raised the issue in Parliament.
He told Sky News: 'I want the Government to impose the pressure on the retailers and the retailers to educate the customers. By doing both of those, you will dramatically reduce the amount of waste.'
The Cucumber Growers' Association estimates 490 tons of plastic wrap is used to cover cucumbers here every year.
Yesterday, it emerged the Environment Secretary had told a meeting last week that he wanted to act following Sir David Attenborough's Blue Planet series, which featured distressing images of marine life caught in plastic litter.
And Mr Gove also warned that the UK would have to start recycling more waste in this country after China announced that it would not take any more. He said that, in the short term, Britain would have to ask other nations in south-east Asia to do our recycling. But in the long term, Mr Gove said, the UK must 'stop offshoring our dirt'.
To help tackle the plastic plague, Mr Gove's department has also started consulting with drinks firms on bringing in a deposit scheme to cut the number of plastic bottles that are finding their way into rivers and oceans.
The Mail has called for the introduction of such an initiative following the success of the 5p charge on single-use plastic bags.
The recycling plans, which will be launched as part of a 25-year environment strategy in the new year, were welcomed by Greenpeace and Wrap last night.
Louise Edge, of Greenpeace, said: 'It's a good sign that Michael Gove is thinking about a multi-pronged approach which includes cutting disposable plastic at the source while also making it easier for people to collect and reuse it.'
A spokesman for Wrap said: 'We are expecting further discussions with Defra shortly and will then be working out what is required to take this initiative forward. 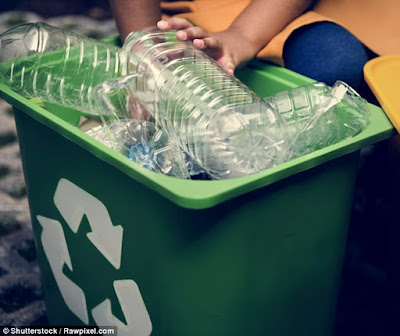 But Martin Tett, of the Local Government Association, which represents councils, told the BBC: 'Common standards for recycling wouldn't be effective, as there is no one-size-fits-all solution to this problem. A key component is reducing the amount of unrecyclable waste we produce in the first place, which is why it's essential that manufacturers and retailers work with us to achieve this. What we need is packaging that is easily recyclable – this would not only make waste disposal easier for our residents, but save considerable amounts of money and energy, whilst protecting our environment.'
A Defra spokesman said: 'We are taking significant steps to tackle plastic waste. 'We are introducing a ban on plastic microbeads and we have taken 9billion plastic bags out of circulation with our carrier-bag charge. We recognise more needs to be done to protect our environment from the scourge of plastics, and have launched a call for evidence around deposit reward and return schemes for plastic bottles and other drinks containers.'

Xmas presents will deliver 11lb of waste per household

Christmas morning will deliver a tide of 114,000 tons of plastic packaging that will be dumped rather than recycled.
The figure equates to about 5kg (11lb) per household, although families with children will end up with four times more.
A study published today estimated that when you add wasted food and drink, Christmas trees and everything else, the figure comes to about 5 million tons.
The figures come from Wildlife and Countryside Link, a group of environment and welfare charities. The group, which used official sources to reach these numbers, said the Government should commit to a raft of measures to tackle plastic pollution in the New Year.
The group is highlighting plastic as it degrades slowly and is having a devastating impact on the environment, particularly the oceans as documented in the recent BBC series Blue Planet II.
Dr Elaine King, director at Wildlife and Countryside Link, said: 'Our waste can be invisible to us once it's in the bin. So it is easy to forget that it ends up in landfill or finds its way into our rivers and seas.
'We need to give a gift to the environment and get our packaging waste under control.'
The Mail investigation found one local authority – Copeland in Cumbria – no longer takes any plastic, having slashed the service because of budget cuts. Some 27 per cent of councils refused to take 'rigid plastics' – including yoghurt pots, margarine tubs and trays – from the kerbside in 2016/17, covering 7.8million homes. England's recycling rates are stagnating, with 42.8 per cent of household waste processed despite a 50 per cent target for 2020.
Dr Dominic Hogg, of Eunomia waste consultancy, said: 'We have a variety of collection and sorting systems, not all of which generate good quality plastics. The Chinese are about to close the border on us. We have a real problem. We're not recycling enough plastics. We're obsessed with convenience.
'Too much stuff is used to deliver a product which is soon discarded – often without any recycling. What we're throwing is increasingly being incinerated, and incinerators are not efficient generators of electrical energy.'
Environment minister Lord Gardiner of Kimble said the move – which follows the Mail's Ban The Beads campaign – would stop the manufacture and sale of 'rinse-off personal care products' containing plastic microbeads in England. He said microbeads were used in products such as shower gels and toothpaste despite natural alternatives being readily available.
Introducing regulations to implement the ban, Lord Gardiner said toiletries containing microbeads were responsible for 35,000 of the 12million tons of plastic entering the oceans every year.

Posted by Jeremy Woodward at 02:59