The issues around 'sovereignty' have been very much part of the political discourse these last couple of years:
Futures Forum: Brexit: and sovereignty and Devon

Although they've actually been around for hundreds of years:
Futures Forum: Allemannsrett: the freedom to roam

And one of the notions is the 'zone' which is free from the usual handicapping regulations
- which we've been toying with even in this part of the world:
Futures Forum: Special development zones for East Devon...?

And one particular project which takes most of this on board is the 'seasteading' initiative:
Futures Forum: Of sovereignty and seasteading

- which is really catching the public eye, as this headline from the Mail last month shows:

It's very science fiction - and it's very 'libertarian' - with this piece from today's i-paper: 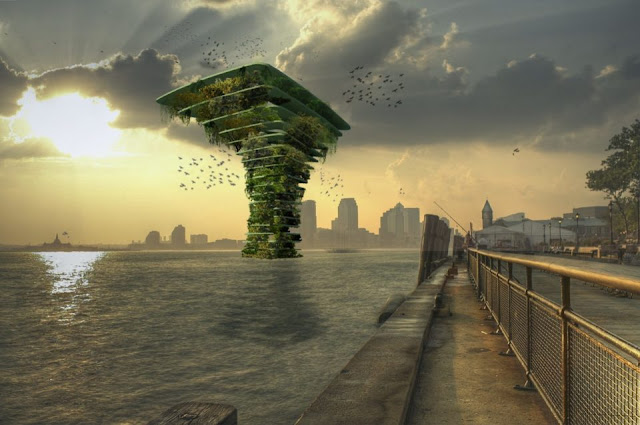 Heather Chinn: 8 December 2017
Joe Quirk says there is no shortage of “blue pioneers” eager to live and work on the floating islands his company is planning to build in a lagoon on the south coast of Tahiti.
“Our greatest challenge right now is figuring out how we choose who the first pioneers will be,” says the 51-year-old managing director of California-based Blue Frontiers. “Many thousands have filled out our online survey on why they want to be there.”
Floating cities may sound like science fiction, but if Blue Frontiers has its way, about 250 people will be living on about 15 artificial islands in the lagoon by 2020. By 2030, the company hopes to have installed a total of 45 islands and its effort to extend the concept of civilisation into something it likes to call “sea-vilisation” will be well under way.
Blue Frontiers is the commercial wing of the Seasteading Institute, an organisation committed to building “floating startup societies” that offer “innovative governance models”. In Tahiti it will attempt to achieve both aims by locating its islands in a newly created special economic zone that offers latitude to experiment with new ways of running a community.

“Nobody is proposing that we have no rules and regulations at all,” says Mr Quirk. “But it is true to say we do believe in economic freedom and personal freedom.”


The floating islands will also “environmentally restorative”, providing a haven for sea life and creating shadows on the sea floor that promote photosynthesis and promote the recovery of coral by slightly reducing sea temperatures. With an estimated price tag of $60m (£45m) for the first phase, the first crop of blue pioneers will need deep pockets. Mr Quirk admits the apartments, family homes and work spaces will be expensive, but not as expensive as buying in Manhattan. “It’s like the first mobile phones. They were expensive, but as the technology developed and they became popular the prices were driven down.”
It is hardly surprising that Blue Frontiers has found French Polynesia receptive to its radical scheme. Rising sea levels mean the region could lose a third of its land by the end of this century.
For Koen Olthuis, the Dutch architect and founder of Waterstudio, a company specialising in designing floating buildings, the cities of the future are more likely to be based both on water and land.

Mr Olthuis said: “I like the Seasteaders’ initiative and thinking, but for me they are at the end of the process and we are at the beginning. They are 100 years ahead and we are 10 years ahead. We see floating cities as a next step in the evolution of buildings. We have colonised the vertical with high rises. Now it is time to adapt to the water.”
To Mr Olthuis floating cities represent an opportunity. He said: “Water gives you space, safety and flexibility. If you can mobilise a building you can move it from one place to another, even one city to another.” Water-based communities, he added, could react to the seasons, with buildings moving away from each other in summer heat but huddling together for warmth in winter.
About 16,000 homes in the Netherlands are on water. Most are houseboats, but Mr Olthuis estimates that about 500 are normal houses built on floating foundations. “There is really not much difference in cost,” he said. “A floating house is about 15 to 20 per cent more.”

As floating houses have increased in popularity the price of building them has come down.
Mr Olthuis said: “The prices are dropping because of economies of scale and it is now feasible for people on a middle income. Affordable homes for everyone will take a while.”
The biggest hindrance to the spread of floating buildings is red tape. “It is hard to fit into existing rules and regulations, said Mr Olthuis. City governments look at them and ask: ‘Is it a boat? Is it a house? How do we tax it?’”
Floating buildings, as well as being a solution where space for expansion is at a premium, can help some of the world’s poorest people, he believes.
Worldwide, one billion people live in slums. Most slums are next to water because poor people have no choice about living in flood-prone areas.
Six floating schools with internet access created by Waterstudio in partnership with Unesco are currently on their way to slums in Bangladesh, Uganda and Venezuela. Similar units could have a variety of uses, such as medical treatment centres and internet cafés.
Mr Olthuis said: “If we use this technology to upgrade slums, we can change the lives of millions.”

Philip Wilson, professor of ship dynamics and engineering at Southampton University, says cities at sea are nothing new – we already have offshore oil rigs and cruise liners. Building floating cities in coastal waters, he says, is “very feasible”, but cities in the deep ocean are another matter.
“It could be done,” said Professor Wilson, “but it depends how much money is available. It’s an idea like building on the Moon or Jupiter. If it costs millions of pounds per person, it isn’t going to happen.”
Conditions far out at sea are also unlikely to encourage people to settle in floating communities. Professor Wilson said: “Somewhere off Thailand would not be a problem. The sea is shallow and it’s nice and warm. But in the North Sea it’s often -10°C, and out in the mid-Atlantic waves can be 30m high.”
And there is a further problem. “A floating city out at sea is going to go up and down with the waves and that means some people will get seasick,” said Professor Wilson. “No one will want to live somewhere that makes them seasick.”

The incredible floating cities we could be living on in the not-too-distant future - The i newspaper online iNews
.
.
.
Posted by Jeremy Woodward at 03:34

I agree with each and every conclusions made on this topic. It is really very informative. Thanks for sharing.
float zone silicon