A particularly nasty piece of alt-rightism points its finger at Asia and Africa when it comes to plastic pollution:
UK Govt Prepares For Tax on Disposable Plastics — While 95 Per Cent of Pollution Comes From Asia, Africa - Breitbart

Perhaps the finger should be pointed at the ideology of 'development':
Debris of modern life clogging waterways | News | The Times & The Sunday Times

Meanwhile, the Chinese government is saying No Thanks to British plastic:
Decades of recycling progress under threat as Chinese ban British rubbish - Telegraph
Plastic crisis as China says it won't take our recycling | Daily Mail Online
The world should wake up when China finally says no to being the global refuse dump | South China Morning Post

And the UK government is trying to be more proactive:
May pledges to use foreign aid to fight war on plastic | Daily Mail Online

As is the campaign group Avaaz:

We've all seen the horrifying images -- whale bellies filled with bottles and bags. Islands of trash stretching for miles. Turtles tangled and drowned. 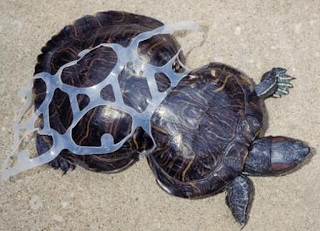 It's a planetary crisis and, unless we act now, there’ll be more plastic than fish in the sea by 2050!

But an amazing new study just found 90% of plastic streaming into our oceans comes from just 10 rivers in Africa and Asia. If we clean up these rivers, we could literally save our oceans!

So instead of waiting for someone else, experts and Avaazers have come up with a plan to kick-start action. If just 50,000 of us donate a small amount today, we’ll:

> Send plastics experts to cities along the rivers to devise clean-up plans;
> Launch massive public campaigns along the polluting rivers;
> And lobby donor countries to fund the 10 rivers plan. UN experts say our movement is uniquely placed to put this plan into motion.


Our addiction to plastic is outrageous. We use 1.4 BILLION plastic bottles. Every. Single. Day. Only a fraction will ever be recycled, and once they get into the environment, they take up to 1000 years to break down!

The 10 rivers are in countries like Cambodia, Laos and India, and they're asking for help. Experts say all these plastic hotspots lack know-how, will and resources. But Avaaz has members in every country. We have a unique track record of mass campaigning. And we know the top plastics experts ready to get to work. We can do this!

Plastic pollution is choking the life out of our oceans. But if we raise enough today, we could become the global movement breathing life back in.

It’s easy to feel helpless in the face of the tsunami of plastic we use. But now we know where it’s mostly coming from, and we know there is a solution. If we don’t do this now, it’s not clear anyone else will. Let’s be the movement our planet needs.

With hope and determination,

A million bottles a minute: world's plastic binge 'as dangerous as climate change' (The Guardian)

By 2050, there will be more plastic than fish in the world’s oceans, study says (Washington Post)

Because, everything connects:
Plastic Pollution - Everything Connects

Which means that we in the UK have to be... a little more proactive:
Futures Forum: Plastic and councils: introducing national recycling standards
Futures Forum: Plastic waste > "The government should invest in more reprocessing facilities to reuse these valuable materials, create green jobs and prevent plastic and paper pollution."
.
.
.
Posted by Jeremy Woodward at 01:00