'Tis the season of loads of plastic packaging:
Christmas waste and a load of festive rubbish! From cheese packaging to wrapping paper | Daily Mail Online

The trouble is that there's nowhere for it all to go now:
Decades of recycling progress under threat as Chinese ban British rubbish - Telegraph
China bans foreign waste – but what will happen to the world's recycling? - The Conversation
Chinese ban on plastic waste imports could see UK pollution rise | Environment | The Guardian
China’s ban on imported plastic leads to ‘impending crisis’ for UK waste recycling | The Independent

But we have known this for some time:
Futures Forum: Trying to improve the quality of recycled waste

This is what the Mail had to say earlier at the weekend:


Plastic crisis as China says it WON'T take our recycling: 'Massive shock' after country rules it will only accept the purest supplies from next year

Britain could be left with mountains of used plastic and cardboard after China announced it will no longer recycle our waste.
The decision was described as a ‘massive shock’ for the recycling industry. More than half of Britain’s plastic recycling – 55 per cent – gets sent to China and Hong Kong.
Much of it is low-quality plastics and paper such as margarine tubs, yogurt pots, plastic film and dirty pizza boxes but from next year China will take only the purest supplies – effectively ruling out household items. Alternative countries will be sought to deal with the waste, but it could end up being stockpiled before being buried or burnt. 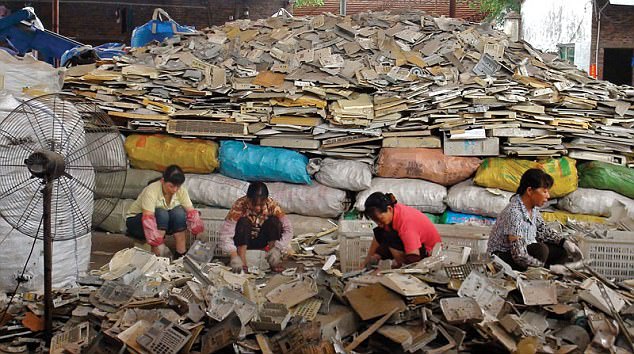 More than half of Britain's plastic recycling is sent to China and Hong Kong, pictured 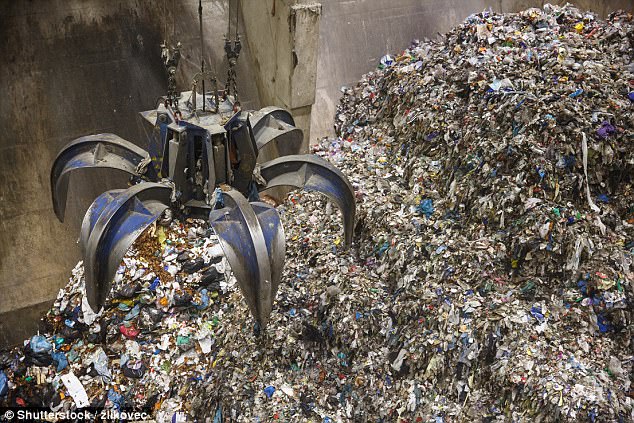 If China goes through with its plan, Britain faces a crisis about what to do with its waste
There is also the risk that illegal dumping will intensify – at a time of unprecedented concern over the harm caused by plastic pollution around the world.
The Daily Mail has led calls for a stop to plastic poisoning the Earth – with campaigns for a tax on plastic bags, a ban on unrecyclable coffee cups and calls for a deposit scheme on plastic bottles
Simon Ellin, head of the Recycling Association, said of China’s ban: ‘It’s a massive shock for the recycling industry. We’ve been given six months to change 20 years of recycling practice.’ He said high-quality waste – such as plastic bottles – was not the problem. ‘The problem is the lower end of the market, your pots, tubs and trays, your margarine tubs and low-quality plastic film, food wrappings,’ said Mr Ellin. ‘These are the things China has traditionally always taken.’
Environment Agency chairman Emma Howard Boyd says the ban could lead to waste ‘being stockpiled or disposed of illegally’.

How much plastic do we export to China?
Around 400,000 tons a year – half of which is domestic recycling.
Why do we send recycling to China?
China has accepted lower quality recycling than many other countries, and has huge demand for raw materials. Sending plastic to China lets us meet higher recycling targets and reduces landfill in the UK. At the same time we have not had to improve the quality of our recycling in the UK.
What happens to it?
It is meant to be recycled and turned into new plastic – but critics say conditions in the Chinese recycling industry can be shocking. A 2014 documentary highlighted poor conditions and child labour at a plant in Shandong province. Scenes showed workers sorting plastic by burning it with cigarette lighters and sniffing the fumes.
What will we do if we can’t export it?
Temporary storage of plastic underground is one possible solution, as is incineration. Waste companies are urgently seeking new markets and recyclers are hoping to find new plants to process plastic in the UK.
A report by environmental group Greenpeace estimates that Britain has sent 2.7million tons of plastic scrap to China for reprocessing since 2012.
Elena Polisano, Oceans Campaigner for Greenpeace UK, said: ‘Instead of confronting our growing problem with throwaway plastic at home, we have been shipping it off to places like China where it’s easier for us to ignore. Now that China has decided they’ve had enough of our waste, it’s obvious that the UK’s recycling system simply can’t cope with the mountain of plastic waste we generate.
‘We urgently need investment in recycling infrastructure and a serious plan to prevent plastic production from continuing to grow. That means developing sustainable alternatives to single-use, disposable plastic products.’
The Treasury is already examining a tax on ‘single-use’ items such as plastic food trays.
As the Daily Mail reported earlier this week, recycling rates in England are stagnating, with just 44.9 per cent of household waste recycled. It is now thought highly unlikely a tough target to recycle 50 per cent by 2020 will be met.
Mary Creagh, chairman of the Environmental Audit Committee, said: ‘This ban could mean a double whammy for taxpayers if the price of our exported waste falls and the cost of UK disposal rises.
‘The government should invest in more reprocessing facilities to reuse these valuable materials, create green jobs and prevent plastic and paper pollution.’
A Defra spokesman said: ‘We are looking at ways to process more of our recycling at home as part of our resources and waste strategy.’