Whether trees in cities is a good thing for trees...

By CECILE BORKHATARIA FOR DAILYMAIL.COM
PUBLISHED: 23:41 GMT, 16 November 2017 |
Trees grow more quickly in cities than rural areas, a new study has found.
Researchers analyzed tree rings in ten cities around the world, and discovered that urban and rural trees have undergone accelerated growth since the 1960s - and say climate change may be the reason for this.
The results revealed urban trees are growing even faster than rural trees, and it could be due to the urban heat island effect, which involves higher temperatures in cities compared to the surrounding landscapes - and that may stimulate photosynthesis to help the plants grow. The acceleration of tree size growth could be beneficial - sequestering more carbon and providing more ecosystem services for cities such as reduced storm water runoff.
According to the authors of the study, while the benefits of trees growing in an urban environment seem to outweigh known negative effects, accelerated growth may also mean more rapid ageing and shortened lifespan. 'Air temperature in urban areas may be as much as 2-10°C higher than in surrounding nonurban areas,' the researchers wrote.  These higher urban temperatures can extend the growing season by up to 8.8 days per year.

There were some exceptions to the general trend that the researchers observed. Urban trees in Mediterranean climates didn't grow faster than rural ones - neither before nor after 1960. And in temperate zones (the cities studied in Europe), urban zone trees grew significantly less than rural ones, both before and after 1960. This could be because these trees suffer from substantial water stress due to high temperatures, modified precipitation patterns and unfavorable soil conditions due to impervious surfaces and compacted soils.
America's forests are shifting across the country because of climate change
Loaded: 0%
Progress: 0%
0:25
Play
Unmute
Current Time0:25
/
Duration Time0:25
Fullscreen
Need Text

Ferne does her sho…

HOW THEY DID THE STUDY

A global team of researchers selected ten cities worldwide distributed over four different climate zones: boreal, temperate, Mediterranean and subtropical.
The researchers selected the most common tree species that occurred from the city center to the suburban and rural area surrounding the city.
They took samples of tree cores along transects from the center to the rural area of the cities in all four main directions: north, south, east and west.
They only sampled trees without visible damage, measures each tree's diameter at breast height, and total tree height was also measured using an ultrasonic hypsometer.
They also analyzed the tree core samples to determine their growth rates over the years, and tree age could be determined by combining city administration records with core sample data. 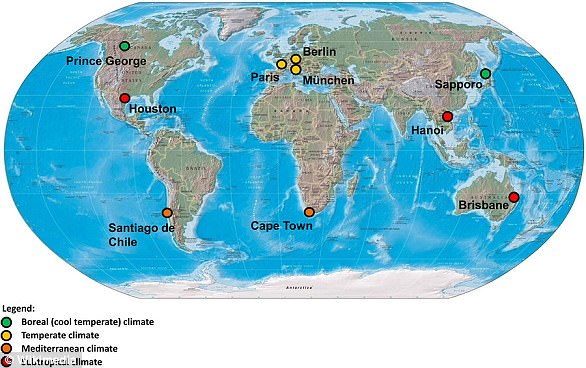 
Across the other zones, accelerated tree size growth means increased Carbon sequestration and earlier provision of many ecosystem services - such as air pollution reduction and reduction in storm water runoff.
However, according to the researchers, it also means more rapid tree ageing, possibly indicating a need for earlier replacement and replanting. 'In order to sustain the green urban infrastructure, planning and management should adapt to this changing tree growth rate,' the researchers wrote.
Whether the accelerated tree growth lowers the stability, biotic resistance, or safety hazard of urban trees is a topic of ongoing research for the scientists.

Climate change speeds up the growth of trees in cities | Daily Mail Online
.
.
.
Posted by Jeremy Woodward at 01:30