CCTV and crime in Sidmouth

The Chinese government is investing heavily in CCTV technologies, as this video report from the BBC notes:
Video

In Your Face: China’s all-seeing state

China has been building what it calls "the world's biggest camera surveillance network". Across the country, 170 million CCTV cameras are already in place and an estimated 400 million new ones will be installed in the next three years.

Many of the cameras are fitted with artificial intelligence, including facial recognition technology. The BBC's John Sudworth has been given rare access to one of the new hi-tech police control rooms.

The Sun calls it the 'Truman effect': 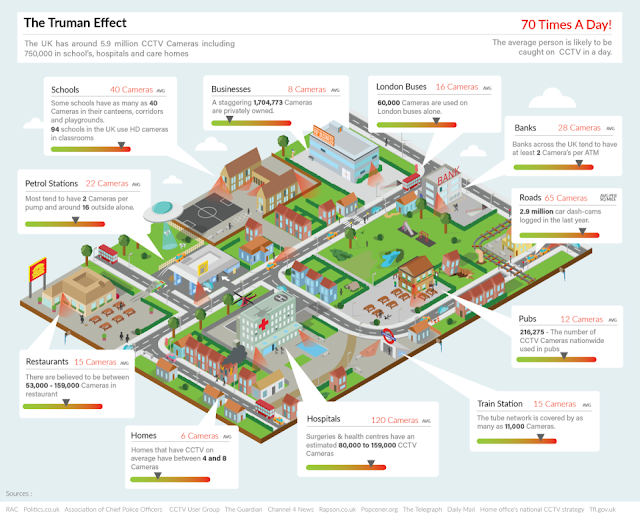 The technology is getting a lot smarter:

One nation under CCTV:
the future of automated surveillance

The UK is one of the most surveilled nations in the world. An estimated 5.9 million CCTV cameras keep watch over our every move, but the volume of footage creates a problem: when the police or security services need to actually analyse it, things move very slowly. Despite the proliferation of CCTV, technology for handling the petabytes of data collected is still little more than human eyeballs and lots of patience.

That might be about to change. New technology could allow police and security services to quickly analyse CCTV footage to look for movement, faces and track suspects across the world. By linking 'dumb' CCTV cameras to a 'smart' online system, authorities will soon be able to find and track anyone. Trials of the technology with two UK police forces could begin in October.

One nation under CCTV: the future of automated surveillance | WIRED UK

There are some who are not happy about this: 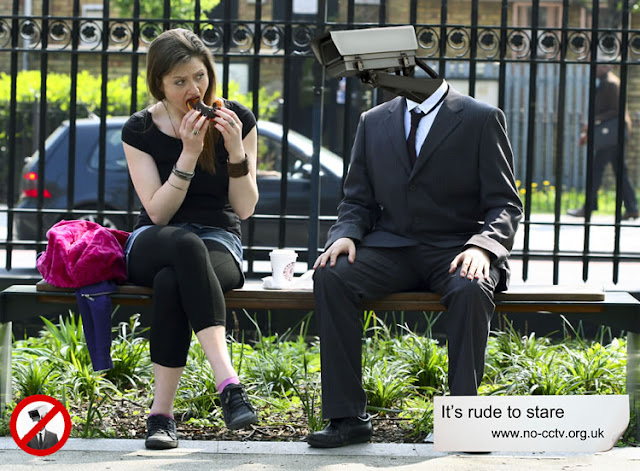 The UK is the most spied upon nation in the world - why doesn't it have the lowest crime rate?
Whatever happened to the UK's common law value of 'innocent until proven guilty'?
Research shows that CCTV simply does not work, so isn't it just a huge waste of money?
Why do the media, police and government portray CCTV as an effective tool?
Why has there been no public debate?

Campaigning against camera surveillance in the UK & beyond » No CCTV

A year ago, a bid was launched for funding for more CCTV cameras on the High Street of Sidmouth:
Revealed: Sidmouth sergeant’s plan for CCTV - Latest Sidmouth and Ottery News - Sidmouth Herald

Although not everyone was up for it:
Streelife users have mixed views on Sidmouth CCTV scheme - Latest Sidmouth and Ottery News - Sidmouth Herald

It's a debate which has been happening for some time in the Sid Valley:
CCTV cameras in the UK - myth and reality

But as one observer has pointed out:

Sidmouth has the lowest figures of actual crime,
but the highest fear of crime anywhere in the UK.

Here's an earlier blog entry which looked at the issues:
Futures Forum: CCTV 'to catch criminals and protect vulnerable citizens' ... And yet, 'Sidmouth has the lowest figures of actual crime, but the highest fear of crime anywhere in the UK.'

And another which looked at where this fear of crime comes from:

Why is there this disconnect between crime figures and the perception of crime? The Mean World Syndrome -- Clip - YouTubeMean world syndrome - Wikipedia, the free encyclopedia

Futures Forum: Crime in Sidmouth: ‘we've kept a lid on it’

Although perhaps we need more speed cameras rather than CCTV:
New safety measures needed to 'stop people dying' on the A3052 near Sidmouth - Devon Live
.
.
.
Posted by Jeremy Woodward at 15:01