A solution to our housing problems: smaller living spaces

Although some Neighbourhood Plans are introducing their own local versions - but only if the local planning authority (the District or County council) has any such standards:
http://www.cullomptonneighbourhoodplan.co.uk/Housing.pdf
http://www.lostwithieltowncouncil.gov.uk/data/uploads/901_1686130978.pdf

There are arguments for and against such standards:
Futures Forum: How much space do you have to live in? ... for/against minimum space standards for private housing

Here is an argument for:

There is no doubt that we need to build many more homes but it is a mistake to believe that focussing on numbers at the expense of space and quality, serves anyone well.
This approach rarely works in the beginning, and it never works in the end.
Only a very small minority of new housing in England is as functional, durable or beautiful as it could be.
It is not that we don’t know how to do it; but for complex reasons, and as a result of conflicting motives, we allow ourselves to settle for less.

And here is an argument against, in yesterday's Guardian:

City dwellers are paying through the nose for restrictive urban planning practices. We would have a fairer society without these rules 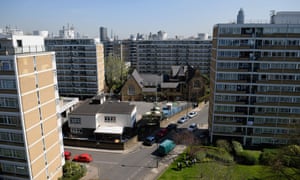 ‘Urban planning teams lack the knowledge, as well as the agility and the incentive, to optimise land use.’ Photograph: Jeff J Mitchell/Getty Images


London’s housing crisis is just the most conspicuous aspect of Britain’s collective failure to meet the demands of urban development. We have moved past the predictable production lines of Henry Ford’s day, but our inability to grasp the chaotic genius of the modern market means we are failing to seize the potential prosperity this change brings. Our communication-intensive new economy is built on professional networking and thrives best in large, dense urban clusters. Most of us feel it in our bones that we must join the central networks and that our careers are incompatible with being cut off in provincial or suburban locations.

Accordingly we spend an increasing proportion of our income on being located centrally. However, prices have increased to a point where many people who otherwise could and should join this productive hub are discouraged, leading to frustration and loss of potential productivity. But it is political interference, especially with regard to housing, that stops urban development functioning properly. When Britain stopped building and started selling social housing the market wasn’t free to pick up the slack.

London’s urban fabric remains incredibly low density compared with cities such as Paris, and our development process imposes severe restrictions. Supply is restricted and prices increased by the planning process, the imposition of space standards and, ironically, via the “affordable housing” system ostensibly crafted to alleviate the crisis.

The latter scheme does not deliver homes to the poorest members of society. Rather it is a huge redistribution machine now meant to encompass a full 50% of all new housing supply. Politicians tend to know how to channel resources to the median voters who can make a difference to them. Many of those who pay for these subsidies are less well off than many of those who receive the benefits. Politicians fire rhetoric against the price rises but we can be sure that as long as they remain so empowered they will never allow prices to come down.

Housing is one of our most essential and cherished commodities. It is rightly one of our biggest markets, but unfortunately one of the most politicised, suffocating under quasi-socialist political interventionism. The loss of prosperity in our whole society is enormous. Not only because of poor housing provision, but because of its stifling impact on all economic activities. That’s why the need for a capitalist revolution is so urgent.Quick guide
What is a community land trust?Show

Opening up the magic of the market would make us all better off, and bring more justice. Current zoning restrictions redistribute wealth and income to homeowners and landowners, and the lack of development imposes a politically engineered wealth inequality.

Equally important is experimentation with new models of living beyond the stifling space standards. Smaller units, co-living and other new forms should be offered. It should be left to us if we want to trade centrality for size, or whether we mind the number of units sharing a core, or whether we are really bothered by being overlooked, or whether balconies are a necessary ingredient. All these paternalistic handcuffs must be replaced by our choices. What will really protect us is not politicians taking choices away – that can only make us poorer – but a lively competition among different suppliers with different products to choose from.

What should be an economic take-off fuelled by technology and urban renaissance has become a struggle on many fronts. The UK’s average annual productivity growth over the past 10 years was just 0.1%. This is a scandal, considering all the progress in science and technology. Of course, the political barriers to urban development are only one part of a larger picture. The general problem is that the potential of the new empowering technologies is stifled by a slow, cumbersome and paranoid political process.

Entrepreneurial creativity should be unleashed so that we can individually – as market participants – explore our own pursuit of happiness and prosperity.

Right now we’re forced to be collective, and controlled by diktat. The effects of these constraints are clear. The necessity to free up individual choice and to unleash entrepreneurial creativity is especially acute in urban development. Inflexible density restrictions and strict land use allocations are hindering and misdirecting development. In the housing sector choice is killed by ridiculously detailed and vastly oversized space standards, that make central living unaffordable for most.

Let’s risk more freedom and self-responsibility, and allow creative energies to be unleashed so that we can make the best use of the space available.

That’s what markets do best. The freedom of mixing land uses is crucial for the vitality of the city. Only a creative process of trial and error, guided by market prices, can find the best uses for individual sites. Urban planning teams lack the requisite knowledge, as well as the agility and the incentive, to optimise land use. It is how we work together, and the dynamic chaos of coming together, that matters.

You might ask how we can be sure that the private sector would build what is needed without quotas?

Nothing is certain but consider this: how can we be sure that the private sector delivers fresh croissants, coffee and orange juice and myriad other delights according to individual preferences on to billions of breakfast tables every morning? This happens without quotas. Further, remember that the 19th century, the era of laissez-faire capitalism, delivered beautiful urban assets that work far better than what 20th-century government planning has delivered.

Jane Jacobs in her seminal work The Death and Life of Great American Cities showed up the vast differences between market-grown cities and urban planning. Her great insight that “cities have the capability of providing something for everybody, only because, and only when, they are created by everybody” is as true today as it was in 1961. It’s time we learned the lesson.

• Patrik Schumacher is an architect and architectural theorist based in London

Although another commentator has asked:
Has housing provocateur Patrik Schumacher ever lived in a studio? | Rebecca Nicholson | Opinion | The Guardian
.
.
.
Posted by Jeremy Woodward at 12:09