Yesterday, the BBC broke the news that yet another West Country area will be going 'unitary':

Scrapping Somerset councils 'may save £28m a year' 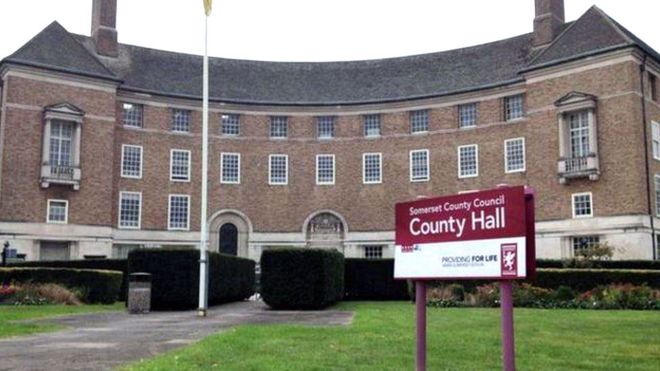 Abolishing all six local authorities in Somerset could save £18m to £28m each year, the county council leader says. Conservative David Fothergill has asked for work to begin to look at how a unitary arrangement could work. The plan would see several single-tier authorities - or one - replacing local councils including the county council.

The idea has been met with mixed responses with one councillor saying it would mean getting "turkeys to vote for Christmas".

Mr Fothergill said: "At a time of unprecedented financial pressures on all councils we are all looking at different ways to be more efficient, make savings and protect the front-line services that our residents value so much. I believe that we owe it to our residents to look at this option too. I want start the ball rolling on work to establish the benefits and costs of such a change so that we can all make an informed decision as to whether a unitary model is the right way to go."

He said savings from introducing a single-authority would include £500,000 per year by moving from five chief executives to one, and about £1m per year by reducing the number of councillors covering the county by about half from the current 300.

While it's relatively unusual for councillors to decide to get rid of their own authorities, it's not unheard of.

In fact Somerset has been looking to the example of its near-neighbours to see just how it could work here - and how much money it could save.

Wiltshire became a unitary authority in 2007 - the same time as Cornwall - merging four districts and a county council into what is now the biggest local authority in the West of England. But that was in a different political era, pre-austerity rather than as a reaction to government cuts.

And next year Dorset is due to scrap its nine councils and set up two new unitaries.

Interestingly it has managed to achieve this with near-consensus from all the councils involved - something which Somerset will be keen to emulate, given the fractured nature of the last attempt at this here in 2007.

Buckinghamshire was also signed off by the government earlier this year to go unitary at the same time as Dorset.

Somerset is hoping to have its model in place by the 2021 local elections.

The Conservative leaders of West Somerset and Taunton Deane said they were prepared to discuss the idea, while the Liberal Democrat leader of South Somerset described the news as "a bombshell" and said "none of us [district council leaders] want to go down this route but we have to put the people of Somerset first".

Independent county councillor, Mike Rigby, said he was pleased with the plan and "had been calling for this for years. It's going to require some turkeys to vote for Christmas so it's not in the bag yet, though I suspect the momentum will become irresistible," he added.

There were protests outside parliament in London in 2007 when the Liberal Democrats made a similar proposal.

Scrapping Somerset councils 'may save £28m a year' - BBC News

DEVON MAY SOON BE THE ONLY NON-UNITISED COUNTY IN THIS PART OF THE SOUTH WEST – BUT FOR HOW LONG?

So, Somerset is moving towards a unitary authority (see below). Inevitable really, isn’t it.

Meanwhile EDDC proceeds apace with Blackdown House, their new HQ in Honiton, at a minimum cost of £10m – and an ultimate cost of probably MUCH more than that – without at any factoring into their calculations of the likelihood of a unitary Devon proposal similarly coming forward with the same arguments for big savings.

EDDC’s consultants apparently estimated the open market value of Blackdown House on completion of the building to be £3 million. Given the current economic situation, even that might be optimistic.

So a potential BIG loss looming – with the local taxpayer picking up the bills? And that’s if HQ builder Interserve s

If Somerset goes unitary, that will be Somerset, Cornwall and Wiltshire all unitary and Dorset double unitary. Devon will be an anachronistic exception.

Has Devon County Council leader John Hart anything to tell us?

And Owl bets soon-to-be-ex-Leader Paul Diviani may be very pleased with the timing of his exit!

Devon may soon be the only non-unitised county in this part of the South West – but for how long? | East Devon Watch
.
.
.
Posted by Jeremy Woodward at 14:49