A correspondent to this blog has suggested a similar event for Sidmouth:
What about a traffic free Sunday in Fore Street (and along the prom) as per Paris?


Polluted Paris goes 'car-free' for a day, joggers and cyclists take over streets

Posted about an hour ago

PHOTO: People walk and cycle along the Champs Elysee Avenue during the "Car-Free Day" event taking place in the French capital Paris. (AFP: Thomas Samson)
RELATED STORY: Paris forces half of cars off roads to fight smog
MAP: France
Paris has staged a car-free day for the first time, with large parts of the increasingly polluted French capital taken over by cyclists, joggers and families with pushchairs on roads normally choked by vehicles.
The roaring traffic of the world-renowned Champs-Elysees avenue was replaced by people strolling in the late September sunshine.
Paris became the latest city worldwide to hold a car-free day as it prepares to host United Nations-led climate negotiations this December seeking to seal a post-2020 pact on curbing greenhouse gases.

If we want a city that is clean, beautiful and green ... I believe that we must not hesitate to ban and thus limit cars in the city.
French car-free day participant and cyclist Renaud

All traffic except taxis and emergency vehicles was banned in four central arrondissements, or districts, from 11:00am to 6:00pm on Sunday (local time).
Paris mayor Anne Hidalgo said she would have liked cars to be silenced across the whole city.
"We didn't get as wide a perimeter as we'd have liked, we asked for the whole of Paris," she said at the start of the event.
"But it's a first and I think next year it will be even bigger."
Ms Hidalgo was accompanied by the mayors of Brussels, Sao Paulo in Brazil and Bristol in south-west England, which have also held car-free days.
Elsewhere in Paris, cars were asked to stick to a pedestrian speed limit of 20kmph — although many drivers ignored the request.
Still, the initiative drew rave reviews from many of those who took advantage of the car-free streets on Sunday.
"It's very pleasurable," said Randy, an American tourist. "It's wonderful to able to just ride freely and not worry about cars."
French cyclist Renaud said Paris needed to take more steps to stem the daily flow of vehicles.
"If we want a city that is clean, beautiful and green ... I believe that we must not hesitate to ban and thus limit cars in the city," he said.
Paris has struggled with an increasingly troubling air pollution problem caused by vehicles, heating and heavy industry, which generate tiny floating particles that can penetrate deep into the lungs and the blood system, causing health problems.
Twice in the past two years authorities have invoked drastic restrictions — which had not been used since 1997 — that forced half the cars off the road in the French capital and its surroundings in an effort to curb smog.
The restrictions allowed drivers to take to the road every other day and were enforced by hundreds of police officers writing citations carrying a fine of 22 euros ($35) to those who defied the rules.

The Economist looked at the bigger picture:

The cars that ate Paris 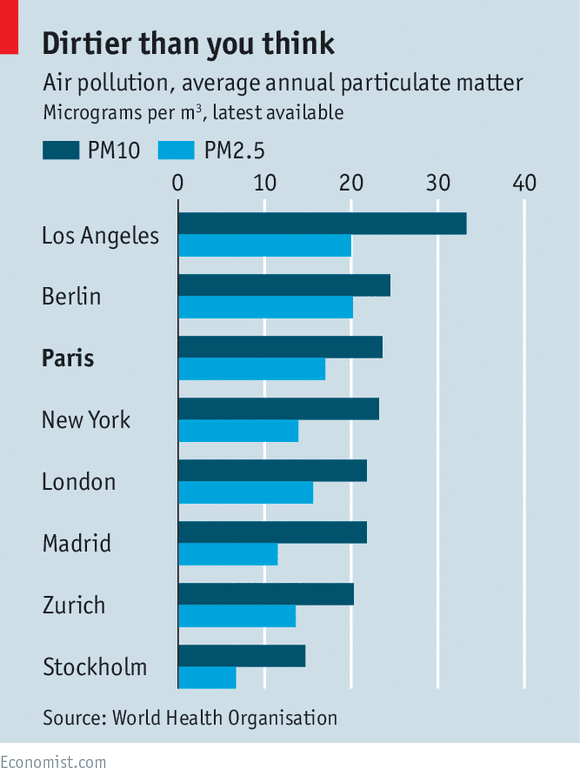 THE French capital gave birth to the flâneur, that casual wanderer of the modern town whose “immense joy” is to stroll the streets “amid the ebb and flow of movement”, in the words of Baudelaire. Paris remains a delight on foot, with its narrow cobbled alleys and pedestrian bridges across the Seine. But most of the ebb and flow these days comes from traffic roaring along the main boulevards. Now, in an effort to awaken its inhabitants’ inner flâneurs, Paris is to hold its first car-free day, on September 27th.
Inspired by similar events elsewhere, notably in Brussels, a group of eco-citizens came up with the idea last year. They petitioned Anne Hidalgo, the capital’s Socialist mayor, who in turn had to lobby the (nationally controlled) Paris police. The upshot is not the complete car ban that the group originally sought. The car-free zone will cover only the capital’s central neighbourhoods. It will take place on a Sunday. And taxis, buses and residents’ cars will still be allowed on the streets, albeit at crawling pace.
In this section
Reprints
Related topics
Yet the event may well capture the imagination of Parisians, who the mayor hopes will picnic on the cobblestones and reclaim the streets. The unfamiliar sounds of a car-free day will doubtless underscore how much noise and grime a modern city tolerates. Paris does not suffer from Beijing-style levels of smog. But there are constant worries about toxic fine-particle pollution, particularly from France’s large number of diesel engines. Background levels of fine particles were 50% above target limits in 2014, and up to three times those thresholds by roadsides, according to Paris’s air-quality watchdog. In March, when pollution levels briefly exceeded those in Beijing, the city banned diesel vehicles and half of all cars on alternate days.
The car-free day is not the first step Paris has taken to discourage noxious emissions. The French capital implemented Vélib, the city’s bike-sharing service, long before London copied it; there is now a similar scheme for electric cars. One road along the Seine has been been partially closed, leaving it free for walkers, cyclists and joggers. There is no toll to enter the city, but the Paris region this month introduced a reduced-rate pass on public transport to encourage suburb-dwellers to take the train. Some angry Parisian car-owners accuse Ms Hidalgo of an obsessive anti-car mania, prompted by the Socialists’ need for Green party votes at the town hall.
Paris is particularly keen to show off its eco-credentials right now. In December, it will host the world climate-change conference. The French are working hard to try to secure a binding global deal on curbing carbon emissions. They have 80 diplomats working on the negotiations and the event, and two ministers lobbying for a deal. It may be time for Paris to take more aggressive measures than a single car-free day. The last thing France wants is to have 40,000 people turn up to try to save the planet and find the city of lights obscured by smog.
From the print edition: Europe