The District Council, developing Mill Street in Sidmouth ... and transparency

A year ago, there were protests at the District Council trebling parking charges in a central Sidmouth car park:
Decision branded ‘ludicrous’ as parking permit price trebles - News - Sidmouth Herald

Now it seems that the District Council wants to get rid of the car park completely:
Futures Forum: Sidmouth parking issues: decreasing capacity at Ham Lane

The reason for doing so is that the town desperately needs more affordable housing:
Futures Forum: A solution to our housing problems: build on car parks

It seems, however, that the District Council has not gone about this very well.

Denise S 3 days ago in Sidmouth

IF this proposal goes ahead, will all the residents who occupy these houses/flats be told that they have to be non-drivers? Not enough spaces to park now without taking away this car park - :)

It was a cynical move by the council to raise the price of the spaces to a level people can't afford and then to claim it isn't needed.

There were men with clipboards in then last Thurs.

I have also heard that the spaces behind the new houses at the bottom of Holmdale are empty because of the huge cost of renting one.

Paul F 2 days ago
Typical tories, it'll be developed by a mate of someone...

You could see that one coming a mile away.
If spaces go, down by the ham in order to fulfilling the 'hoped for' town plan & possible 30 flats there, where or where do people park when they come here & for some live here?

My husband and I thought this would happen. Conniving bunch of people at the council!

It is exactly this style of conduct which lead to so many new independent candidates at the last election. And still the electorate voted the old council back into the job, at least with a high enough proportion. Too many voters either never think about anything (and vote for what they always voted for) or they simply don't care because this issues clearly don't touch them at all. Worse, these issues are not even noticed by voters.

It may appear rather silly to criticise the electorate, but the only hope an individual has, is to make their own life as independent from council decisions as possible. Easier said than done though.

The power all the independents can use together is rather limited. I can already see the smug faces of those who can vote through whatever they like.

In their arrogance they now even try to window dress it by claiming they only do this to generate more social housing. As if this would ever be the real motivation of this kind of politician.

I am wondering whether it will be 'social housing'?

This would be another ideal site for Retirement Housing...like Ortus part of McCartney Stone etc. etc....flat near shops....

Tony G a day ago

Apparently this plan was never discussed with councillors, including those who represent Sidmouth, before it was publicly announced. It seems to be another blatant example of EDDC officers making strategic decisions without any consultation or democratic approval.

Tony G
This is the reference to the paper that was presented to Cabinet in July 2014, when it was under Part B, i.e. secret.
The paper was entered into the public domain in March 2015.
It makes interesting reading. Basically, the paper confirms that the present proposal is a knee-jerk reaction to the chronic and hugely embarrassing over-estimation of demand made last year.
It also confirms that there is very considerable demand for spaces, and that it is only the trebling of the charge that has curtailed that demand.

This paper should have been in the public domain since March 2015, but it was actually published on the EDDC web site yesterday.

Funny how the publication was delayed past the point that the Council decided that the car park was no longer needed and they should put houses on it instead. Perhaps just a coincidence (i.e. incompetence), but then again perhaps not.

Matthew B 5 hours ago

Don't normally comment on SL but thought I should here. My position, and that of other ward cllrs, was put in the Herald this week (if slightly misquoted - I had said we have long suspected this would happen as a result of the price hike, rather than it being a 'bombshell') but just to add to that I am meeting with the CEO to discuss this on Monday.
Don't want to say too much here now but what I will say is, to echo what PP says above, that if the people of Sidmouth do not organise in some way to demonstrate clearly what they want for the future of their town then EDDC will carry on regardless.
I am in no way defending them (EDDC) but they have to look at the district as a whole and target what they have set out in their Local Plan and that includes funding affordable housing and not just in Sidmouth.
There are a number of possible intentions behind the announcement on Mill St car park but where the s106 Sanditon money ends up (er.. prob not social housing on the car park) is one. I
imagine when the bulldozers begin to roll over the Knowle people will get upset and maybe wish they had done more. This is now their chance to act before the same happens on what is the last bit of genuine real estate left in Sidmouth and take ownership of what will happen there before EDDC again makes that decision for the town and sells it off for development. You have been warned (again). We as cllrs can only do so much without the town's backing.

Sounds rather like the problem experienced gaining access to all 'Documents' online from EDDC Planning
Some are mysteriously unavailable due to "system error " message Finally accessible when lodge an objection under comments and following a complaint sent via email
I can see why so many residents feel town is being ruined with over development, unsuitable development, lack of parking etc when so much of EDDC decision making is conducted as secretively as possible.
Did you realise that if you want to keep abreast of planning apps in your neighbourhoods you HAVE to actively seek the information yourself online weekly. As letters are now are only sent to the nearest neighbour(s) and planning apps not published in the local paper or attached to local lamp posts.
Thus monstrous modern new build(s) could be appearing in your vicinity soon

Matthew B 4 hours ago

as cllrs the council has a statutory duty to send all planning applications to ward members as they come in. if there is any planning issue that you would like to bring up do please contact us.

This is the latest from the Herald, as referred to in the Streetlife exchanges: 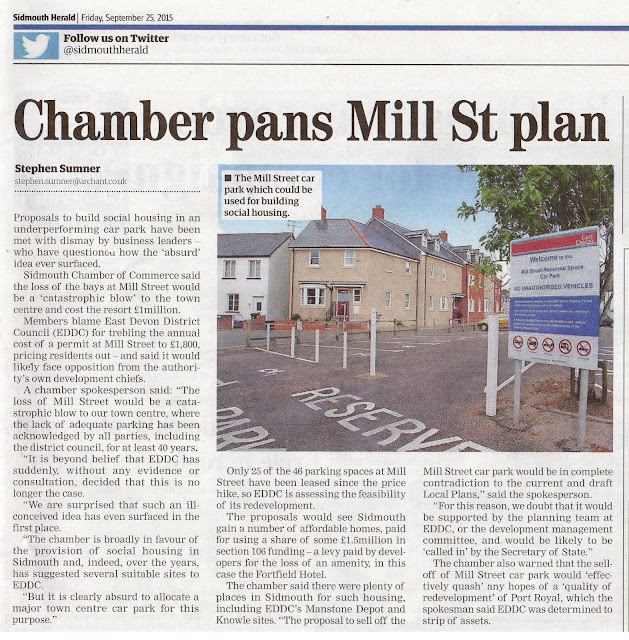 And here is more comment from another Sidmouth District Councillor:

I know I have been quiet for a while, but I have been moving house and I have not yet been connected to broadband! This is making communication difficult. However I am still here and working on a few things.

Perhaps the most significant new issue is the recent announcement from EDDC about the possibility of using Mill Street car park as a site for affordable housing. Whilst this might be a good plan (we know there is Section 106 money from the Sanditon development to be spent), this site did not come up when Matt Booth and I met officers about this topic. We are pursuing answers from the Leadership about their plans for the eastern part of town and will communicate as we can in due course.

I am also very keen to get the views of residents and business owners on how that part of Sidmouth could develop. EDDC own a lot of bits of land there, including the Port Royal site included in the Local Plan (where the lifeboat station and sailing club stand as well as the Drill Hall). This means we have to work together to secure the development we want, rather than allow others to remodel Sidmouth for us. If you are not aware of how development by EDDC have gone in the past, do take a look at the Seaton and Exmouth items on this website.