Sidbury, the Villages Plan and defining the 'built-up area boundary'

Earlier in the summer, the District Council opened up consultation on what the "built up area boundary" should be for each village in its Villages Plan:
East Devon villages plan - East Devon
AND another consultation: Villages, small towns and their built-up boundaries – yep, another cart that went before horse! | East Devon Watch

However, the problem in 'defining' a 'BUAB' is that there might be a temptation to build up to those very boundaries.

As noted by the EDW blog:
Dunkeswell – also suddenly has its built up area boundary changed to facilitate development | East Devon Watch

Even then, it still might be possible to build beyond these defined boundaries:
Can I build outside the built-up area boundary? - East Devon

Including into the green belt:
Homes in AONB ‘would erode Sidmouth/Sidbury green wedge’ - News - Sidmouth Herald

There is a cross-over meanwhile, with the neighbourhood plan, within that old chestnut called the draft Local Plan:
The Local Plan circus comes to town | Susie Bond

The village of Sidbury is undergoing its own reassessment of 'where to build'.

The Town Councillors for Sidbury have a blog where they have been placing regular pieces - of late, on the proposals for housing in the village:
Sidbury Ward Town Councillors

This is the Herald's report from last week:


‘Give residents a say on Sidbury’s future’

An aeriel photo of the site in Sidbury put forward for developed
‘Sidbury’s growth is being completely curtailed for the next 25 years’ – but a ward member is calling for it to be given the chance to expand.
Town councillor David Addis said East Devon District Council’s (EDDC) draft Villages Plan gives the settlement no room to grow and will force young families to look elsewhere to get on the housing ladder.
But his colleagues urged caution before opening Sidbury up to development and said their proposed neighbourhood plan would let residents have their say.
A developer has recently come forward with initial proposals to build 39 homes in the field south of Furzehill – a site previously allocated for 15 homes by EDDC.
“This document offers nothing to the village of Sidbury,” Councillor Addis told last Monday’s town council meeting. “The present proposals are restricting the village and stifling wellbeing. It gives Sidbury little chance to expand for the next 25 years – it’s been completely blocked in.”
He said he wanted to hear residents’ views on its potential expansion before the town council responds to the Villages Plan, and asked to push back the Monday (September 21) deadline. The date coincides with the developer’s public exhibition on its proposals, in the parish room from 2pm until 7pm.
Cllr John Hollick concurred, saying: “EDDC has said it does not want to increase development in its rural settlements. It is very commendable to protect the villages but perhaps is short-sighted. A site that can take additional housing should be welcomed.”
But Cllr Ian Barlow said: “If you say you can have housing a developer will do it – and remove any low cost housing. A knee-jerk reaction could bite us in the backside.”
Civic leaders are considering drawing up a neighbourhood plan for the Sid Valley – and if it goes ahead, the community-led document will override the restrictions of the Villages Plan.
Cllr Louise Cole said: “The Villages Plan is a useful protection. The neighbourhood plan is an opportunity to ensure that if there’s a need it’s done in a way that’s sustainable, rather than being imposed by a housing authority.”
‘Give residents a say on Sidbury’s future’ - News - Sidmouth Herald

Meanwhile, a developer has made very specific proposals for housing in the village.

This is from the front page of this week's Herald: 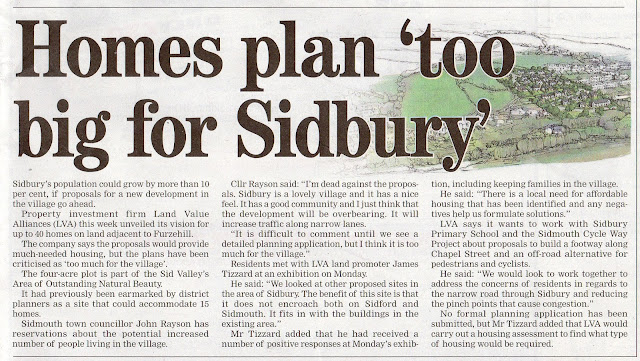