The campaign asking the District Council to release information about its relocation project has been going on for at least two years:
Futures Forum: Knowle: Freedom of Information requests: Relocation Working Parties: latest response from District Council

This action was prompted by concerns about District Council attitudes to the publication of information:
Transparency vs. Secrecy | East Devon Alliance

This would have a direct baring on the District Council's obligations:
Futures Forum: The Freedom of Information Act and East Devon >>> >>> the story continues

There are several campaigns under way questioning the government's proposals - as well as the process of reconsidering the FOI Act itself: The government has announced a new Commission to examine the FOI Act and consider what further restrictions should be imposed on the right to know.
This is likely to involve considering new measures to:
(1) prevent the disclosure of government policy discussions
(2) strengthen the ministerial veto
(3) reduce the Act’s ‘burden’ on public authorities.
The case for strengthening the Act is not on the agenda.
The Justice Secretary, Michael Gove, referred to the first of these issues in the Commons in June 2015. Read our recent briefing on this issue and our 2012 submission to a House of Commons select committee. 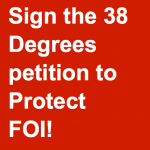 The Prime Minister referred to the second issue in March 2015 after the Supreme Court had ruled that the use of the veto to block the release of Prince Charles’ correspondence with ministers had been unlawful. Our briefing on this issue will be published shortly.
We have commented on the third issue in the context of the coalition government’s proposals to amend the FOI fees regulations and the draft regulations to do so published by the Blair government in 2007.
For examples of important information disclosed under the FOI Act, see here.
In a separate move, the Ministry of Justice has proposed that there should be a £100 charge for appealing to the  First-tier Tribunal against an Information Commissioner decision. An oral hearing would cost an additional £500. Appeals are currently free.
The introduction of fees for Employment Tribunal appeals, for example against unfair dismissal, has led to a massive fall in the numbers of cases, down to 1/3 of their previous level,   The FOI tribunal charges are likely to lead to a collapse in the number of appeals being made by requesters. Authorities, on the other hand, will have no difficulty challenging decisions that they don’t like.
See this blog for an analysis of the new proposals. These are available for consultation till September 15 2105 together with an impact assessment. Please let the MOJ know what you think. This note may help you to identify which bit of the consultation you need to address.
What the Campaign has said
What others have said

This campaign has in turn pointed to the current 38 Degrees petition:

Protect our Freedom of Information laws, that give people the right to hold our decision makers to account.

The government wants to restrict Freedom of Information laws - that help citizens expose dodgy lobbyists, poor government decisions and threats to public safety. They're desperate to water-down our right to hold them to account. While only a few of us may have ever made a request using Freedom of Information laws - they have the power to affect us all.
It was a ‘Freedom of Information’ (FOI) request that exposed the MPs’ expenses scandal. And it was another FOI request which exposed that a third of NHS contracts were being handed-out to private companies. FOI requests are critical for many of the campaigns that improve our society.
Newspapers and several Conservative MPs have already spoken out against the plans. A huge people-powered petition - signed by hundreds of thousands of us - will add even more pressure on the government to scrap their idea. Please sign the petition now.

The deadline for consultations on the specific proposal to charge for FOI appeals is tomorrow:

Email Ministry of Justice: Court and Tribunal Fees Consultation
The proposal affecting FOI appeals could mean charges of up to £600 to get information released. The government has been forced to hold a public consultation. They’re trying to keep this under the radar, and aren’t expecting many responses. So if thousands of us feed in, we could overwhelm their consultation and topple these plans to make government information harder to get hold of.The consultation process is about more than just FOI appeals, there are two questions that relate to Freedom of Information (Questions 14 & 15). Question 14: Do you agree with the proposed fees for all proceedings in the General Regulatory Chamber: specifically £100 to start proceedings with a determination on the papers; and a further fee of £500 for a hearing? Please give reasons.Question 15: Are there any proceedings in the General Regulatory Chamber that should be exempt from fees? Please give reasons. Feel free to edit the text as much as you’d like to. Remember to be polite - your response will be taken more seriously. The deadline’s Friday - so we’ve got 48 hours to get as many responses in as possible.