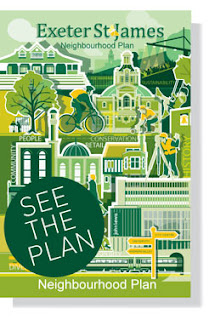 See a copy of the final Plan... and supporting documents
Transport
Making St James a more accessible and attractive place for pedestrians and cyclists. The Neighbourhood Plan will work to create a movement network that reflects the predominantly residential character of the area and encourage more sustainable means of transport.
• Strategic traffic and signage: Policy to define routes for strategic traffic around St. James and the preferred routes for traffic within the ward. This could include measures to direct HGV traffic away from residential areas through modifying the highways signage strategy for the area. A strategy to de-clutter and reduce the level of street signage within and around St. James generally could be included.
• Residential streets: Residential areas make up the majority of the St. James ward. To preserve and enhance the character and safety of certain streets, such as Well Street and Devonshire Place, the Neighbourhood Plan will contain a policy to discourage ‘rat-running’ and encourage pedestrian priority in residential streets.
• Sustainable transport: policy to identify and prioritise safe routes for walking and cycling. The Neighbourhood plan will consider public transport provision within the ward and look at ways of improving bus operation and options for enhancements to the railway station.
• Parking: Ensuring that local businesses and shops are serviced by adequate short stay parking spaces. Policy will consider options and put forward potential projects to increase the supply of short stay parking spaces available to local businesses, services and shops.
• Accessibility: a general policy to cover the whole of the ward to ensure high quality standard of accessibility for all section of the population in the future. De-cluttering the urban environment will play a role in achieving this objective.
St James Neighbourhood Plan • Exeter St James

Some observations from the Campaign to Protect Rural England:

All adopted neighbourhood plans reviewed outline policies under the umbrella of ‘transport’.

However, whilst Exeter St James has policies specifically headed ‘Transport’, Oswestry and Thame discuss the relevant policies under sections entitled ‘A Wellconnected Town’ and ‘Getting Around’.

Such policies focus predominantly on improving accessibility and public transport options. For example, Oswestry’s WC2 policy aims to realise the proposed Cambrian Railway connection from Oswestry to the main line at Gobowen Railway Station whilst speeding up the phased development of the ‘Railway Line Greenway’ (a walking and cycling route) situated alongside. Similarly, Thame’s policy GA3 seeks developer contributions to support the provision of a cycle route to Haddenham and 6 Thame Parkway Rail Station, consequently improving accessibility to rural rail.

Planning for Sustainable Travel looks at the design of a town - and how it impacts on transport:

Neighbourhood design and street layout are also important to travel. The relationships between buildings, streets and open spaces form the urban fabric that helps to give a neighbourhood its physical identity.

Note the image contrasts poor permeability to the north of the road and better permeability to the south. The original diagram has been amended to provide linear high-street style shopping to the south (originally mall style) and a more integral school location.
Neighbourhood design refers to the scale, form and function of buildings and open space (including streetscapes). Street layout refers to the pattern of local streets, for example as ‘traditional’ grid networks, cul-de-sacs or hybrid forms (Figure 12). Both can have an impact on generated travel patterns. Sustainability objectives move transport planning beyond increasing throughput, to include consideration of transport routes as ‘places’ as well as ‘links’ (for a useful working typology, see ‘Link and Place’, Jones, Boujenko and Marshall, 2008).

1. To what extent does neighbourhood design and street layout influence travel behaviour?
‘Traditional’ neighbourhoods, including fine-meshed grid-networks, are associated with higher non-car mode shares and trip rates whereas ‘suburban’ neighbourhoods and cul-de-sac style, poorly-connected street networks are associated with lower non-car mode shares and trip rates. Much of this is related to permeability and legibility for pedestrians and cyclists. Thus, neighbourhood design and street layout have some influence on the mode and frequency of local trips (especially non-work trips).
2. What best practice guidance is available on neighbourhood design and street layout?
Again there are wider contributing factors to travel, including context and personal preference, however there has been recent emphasis in the UK in terms of local streetscape design aspirations, including the Manual for Streets and other documents. These have mainly attempted to bring together the urban design and transport planning disciplines, and there is little evidence in terms of resulting travel behaviour. The assumption is that walking and cycling conditions and use improve. Many of the recommended elements of good design also contribute to increased safety and accessibility, thereby improving wider quality of life objectives.

Practitioners (in masterplans) are advised to:
9.1. Encourage walking, cycling and public transport use (where applicable) through permeable, well-connected, ‘traditional’ grid street networks.
9.2. Avoid circuitous, ‘surburban’, cul-de-sac street networks with few access points and lengthy routes to nearby locations.
9.3. In new developments, provide safe and high-quality walking and cycling environments throughout. In existing developments, consider retrofitting footpaths and adding cycle lanes to improve the travel experience of walkers and cyclists. Sustainable modes can be given priority in terms of journey length and time (sometimes known as ‘filtered permeability’).
9.4. Ensure integration between new development and adjacent built-up areas in terms of street network, public transport services, footpaths/cycle routes and design standards.

The evidence given here is necessarily selective, but gives an introduction to the research on this topic. More details are found in the background technical report.
There are few studies which directly measure the travel associated with different neighbourhood and street network design types. Of those available, ‘traditional’ neighbourhoods and ‘good’ streetscape design, including fine-meshed grid-networks which facilitate walking and cycling, are associated with higher public transport, walk and cycle mode shares and trip rates, but with a weak significance because there are other factors involved in the rationale for travel. Conversely ‘suburban’ neighbourhoods and cul-de-sac style, poorly-connected street networks are associated with lower public transport, walk and cycle mode shares and trip rates.
In the UK, a recent study of Surrey found that energy consumption in the journey to work is lower in neighbourhoods with ‘traditional’ grid street patterns and higher in locations with cul-de-sac style street patterns. This is especially so when the cul-de-sac streets are remote from the village or town centre (Hickman and Banister, 2007a). Aditjandra et al (2007) develop similar conclusions.
Elsewhere, a study of the Netherlands looked at the effect of urban design, including home type, street design and neighbourhood characteristics, on shopping, social and recreational trips. The study found that these design characteristics (and traffic management) have a significant impact on trip frequency and mode choice for shopping, social and recreational trips but that socio-economic characteristics tend to determine commuter travel (Meurs and Haaijer, 2001).
Other research has looked exclusively at non-work trips. A series of studies of the San Francisco Bay Area, California have found that the frequency of walk trips to shops is higher in ‘traditional’ neighbourhoods (Handy, 1995) and that frequency of walk or bicycle trips is higher where pavements or cycle paths are present in a neighbourhood (Kitamura et al, 1997). A comparison of ‘traditional’ (mixed use, grid street network) and ‘suburban’ (separated use, curvilinear street network) neighbourhoods found that the greater proportion of walking and public transport trips in the ‘traditional’ urban neighbourhoods are substitutes for longer car trips undertaken in the ‘suburban’ neighbourhoods (Cervero and Radisch, 1996).
Another study of the San Francisco Bay Area found that distance travelled by car for non-work trips is lower where street connectivity is higher and the use of non-car modes for non-work trips is more likely in areas with higher walking quality factors. In this study, street connectivity is measured in terms of proportion of four-way intersections and walking quality is characterized in terms of pavement provision, street light provision, block length, and flat terrain (Cervero and Kockelman, 1997).
Recent best practice guidance in the UK deals specifically with neighbourhood design and local street layout, particularly in the context of new residential developments (although there are wider applications). The Manual for Streets (DfT, 2007b) provides advice on best practice in local street layout and design, with a particular focus on the internal layout of new residential areas. CABE’s Sustainable Cities website also promotes improved street design and layout, drawing on some of CABE’s work in this area.
The Urban Design Compendium (English Partnerships, 2000) similarly emphasises the importance of transport in neighbourhood urban design and Cowan (2008) advises on design and access statements.
Further reading here

Great post with meaningful information. I appreciate sustainable transport and parking information in this post.
meet and greet at manchester