Sky News has been in the North Sea with Scottish fishing boats:
Brexit trawler: UK fishermen have high hopes for future 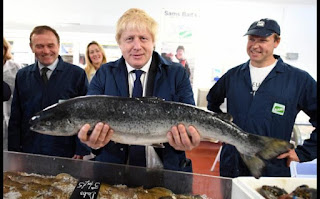 Boris Johnson pictured with a fish during the EU referendum campaign
British fishermen will be able to catch hundreds of thousands of tonnes more fish after Brexit because it will be able to overhaul "unfair" fishing quotas, the fisheries minister has said.
George Eustice said that Brexit will provide a "good deal" for fishermen because current quotas give a "disproportionately large" share of catches to fishermen from the EU.
He said that after Brexit the UK will strike new "reciprocal" arrangements with the European Union which will give fishermen a greater share of catches in British waters and abroad.
He said that while a member of the European Union negotiations about fishing quotas had stalled because of the "institutionalised intertia" of Brussels.

And there's not so good news: 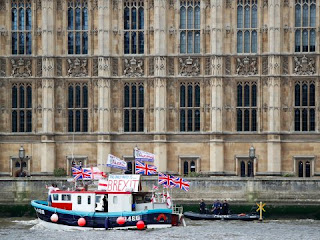 A boat from Fishing For Leave's Brexit flotilla sails down the Thames, June 15Reuters / Stefan Wermuth

Britain's £1-billion fishing industry, which voted overwhelmingly to leave the EU, says it feels "betrayed" by the current course of Brexit negotiations.
A poll before the referendum suggested 92% of fishermen would vote to leave the EU, but many are now worried about Theresa May's plan to roll over the EU's much-maligned Common Fisheries Policy (CFP) into UK law.
The CFP sets rules for how many fish each EU country's boats can land. Several politicians have warned that dropping the policy will not benefit the industry, but most fishermen disagreed, believing that its restrictions are the cause of a rapidly declining UK fleet.
But Prime Minister Theresa May intends to introduce a 'Great Repeal Bill' in the wake of Brexit, which will roll over all EU law into UK law — including the CFP.
Alan Hastings, a spokesman for Brexit campaign group 'Fishing For Leave,' told Business Insider that the proposal risks "throwing the industry under a bus."
"It’s the equivalent of being told you’re leaving prison and then being told you’re actually staying. If we adopt the CFP, it will squander the opportunity that Brexit provides to rebuild the UK fishing industry," he said.
He called for an "exemption" for fisheries policy from May's plans, but accepted that looks unlikely. He said: "Our great worry is that the government will think if they give an exemption to fisheries, they'll have to give an exemption to everything else. But if Brexit's about having a clean start, then why bother to adopt everything in the first place? To our mind it’s just a way to fudge Brexit."
A government spokesperson told Business Insider: "Our fishing industry is immensely valuable and supporting our fishermen will form an important part of our exit from the EU – this means ensuring a profitable fishing industry, sustainable stocks and a healthy marine environment. From the moment we leave, Parliament will be in control and able to make the changes the British people want to see," they added.
Hastings said that Fishing for Leave is planning several high-profile publicity stunts in order to "push fishing back up the agenda." In June, days before the referendum took place, Fishing for Leave organised a flotilla of boats to motor down the Thames, joined by other Brexit campaigners including Nigel Farage.