The chair of the Town Council's planning committee suggested that most of the flats being proposed by PegasusLife at Knowle should be reserved for local retirees - following a question to the developer's representative present at the meeting with regard to how much interest there had been from locals:
Futures Forum: Knowle relocation project: planning application rejected again by Town Council: 85% of the development should be restricted to local residents

This appears to confirm that PegasusLife is targeting retirees from outside of Sidmouth - which suggests that the demand locally is insufficient.

In which case, the developer's and planning officers' "public benefit" argument is heavily outweighed by the bringing of more over-sixties to a town whose health services are overstretched and fragmented... all with an uncertain future:
eastdevon.gov.uk/media/1936385/061216-combined-dmc-agenda-compressed.pdf
Futures Forum: Knowle relocation project: planning application to be considered by District Council: Tuesday 6th December >>> planning officers brush aside planning policies

To refer to the objection from Councillor Consultee, District Cllr Marianne Rixson:
I object to this application on the following grounds:
Strategy 4 - Balanced Communities
The District Public Health Summary 2015 -16 (Devon County Council) for East Devon reveals that Sidmouth has a far higher over 85 population than the rest of the country, let alone Devon. Assisted living accommodation on this site will do nothing to redress the existing imbalance.
https://devonhealthandwellbeing.org.uk/jsna/himp/

As reported by the Herald: 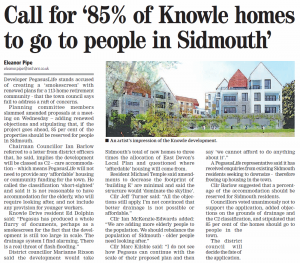 And reproduced on the East Devon Alliance site:

Written by East Devon Alliance on 19-Nov-2016. Posted in EDA in the Press, Marianne Rixson

Developer Pegasus Life stands accused of creating a ‘smokescreen’ with renewed plans for a 113-home retirement community – that the town council says fail to address a raft of concerns.
Planning committee members slammed amended proposals at a meeting on Wednesday – adding renewed objections and stipulating that, if the project goes ahead, 85 per cent of the properties should be reserved for people in Sidmouth.
Chairman Councillor Ian Barlow referred to a letter from district officers that, he said, implies the development will be classed as C2 – care accommodation – which means PegasusLife will not need to provide any ‘affordable’ housing or community funding for the town. He called the classification ‘short-sighted’ and said it is not reasonable to have accommodation for the elderly, who will require looking after, and not include any provision for younger workers.
Knowle Drive resident Ed Dolphin said: “Pegasus has produced a whole flurry of documents, perhaps as a smokescreen for the fact that the development is still too large in scale. The drainage system I find alarming. There is a real threat of flash-flooding.”
District councillor Marianne Rixson said the development would take Sidmouth’s total of new homes to three times the allocation of East Devon’s Local Plan and questioned where ‘affordable’ housing will come from.
Resident Michael Temple said amendments to decrease the footprint of ‘building E’ are minimal and said the structure would ‘dominate the skyline’.
Cllr Jeff Turner said: “All the objections still apply. I’m not convinced that better drainage is not possible or affordable.”
Cllr Ian McKenzie-Edwards added: “We are adding more elderly people to the population. We should rebalance the population of Sidmouth – older people need looking after.”
Cllr Marc Kilsbie said: “I do not see how Pegasus can continue with the scale of their proposed plan and then say ‘we cannot afford to do anything about it’.”
A Pegasus Life representative said it has received enquiries from existing Sidmouth residents seeking to downsize – therefore freeing up housing in the town.
Cllr Barlow suggested that a percentage of the accommodation should be reserved for Sidmouth residents.
Councillors voted unanimously not to support the application, added objections on the grounds of drainage and the C2 classification, and stipulated that 85 per cent of the homes should go to
people in the town.
The district council will decide the fate of the application.

Sidmouth Herald: Call for ‘85% of Knowle homes to go to people in Sidmouth’ « East Devon Alliance