One can be both 'iconic' and 'green':
Futures Forum: Plans for Port Royal: the Tokyo Olympic stadium and "fitting better with its immediate environment"

Here's another similar project which might inspire what's eventually put up at Port Royal:


National League side Forest Green Rovers have unveiled plans for a £100m sports facility, which will include a new stadium for the club.
The new stadium is expected to accommodate 5,000 supporters with capability to double in size. Forest Green have played at The New Lawn since 2006 with chairman Dale Vince hopeful the new development would be completed in around five years.
"By the time we get to build, we will be in the Football League," said Vince.
The development, dubbed 'Eco Park', will be a 100-acre sports and green technology centre at Junction 13 on the M5. Located on either side of the A419, half of Eco Park will be dedicated to creating state-of-the-art sporting facilities, including an all-seater stadium, training fields, 4G pitches, multi-disciplinary sporting facilities, as well as a sports science hub. The other half of Eco Park will compromise a green technology business park, capable of serving up to 4,000 jobs.
Forest Green were promoted to the Conference - now called the National League - in 1998 and Vince says they are outgrowing their existing home.
"We've seen our gates double and it chokes the hill and it upsets our neighbours," he told BBC Radio Gloucestershire.
"We want to get bigger. We've got intentions to get into the Football League so the problem will only get worse. We've been looking for a couple of years, working with Stroud Council. This place would be ideal."
Vince added he hopes The New Lawn "could become affordable low carbon homes" and after an initial consultation period the green-energy tycoon hopes to submit a planning application in September.
Since taking over the club in 2010, Vince introduced: 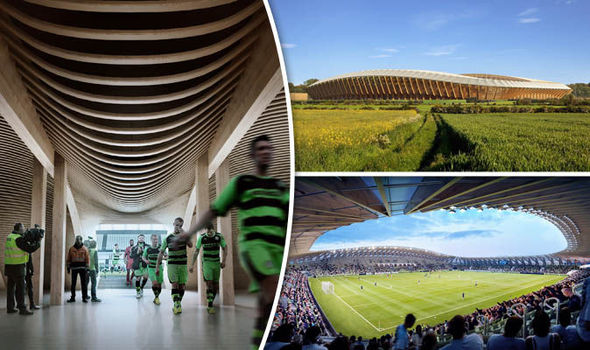 SWNS
CGI of the new wooden stadium planned for Forest Green Rovers
Former hippy Mr Vince, the boss of the green energy firm Ecotricity, owns Forest Green Rovers football club in Nailsworth, Gloucestershire, and wants to build a new 5,000 seat stadium.
He invited designs for a stadium that would live up to his green principles and the winner, Zaha Hadid Architects, has put forward an innovative and groundbreaking timber design.
A planning application will now be submitted to Stroud District Council by the National League club.
Mr Vince, who has banned meat eating at the current Forest Green Rovers ground and expects his players to follow his vegan lifestyle, said the stadium will be the centrepiece of a £100m Eco Park that he wants to develop near Eastington, Glos.

It would make Forest Green the “greenest football stadium in the world,” he said.
“I think this is going to be special for the club, for the town, for the district and for the whole of county,” he said.
“Zaha Hadid are a globally renowned company with a fantastic and unique style. They have built some fantastic sport stadia around the world, including one at the Olympic Park in London. 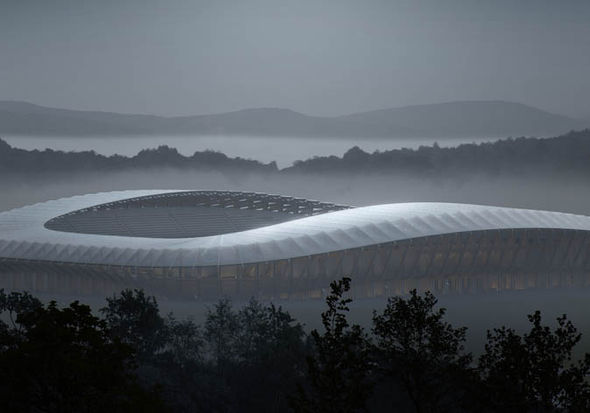 SWNS
Plans are for a 5,000 seat wooden stadium 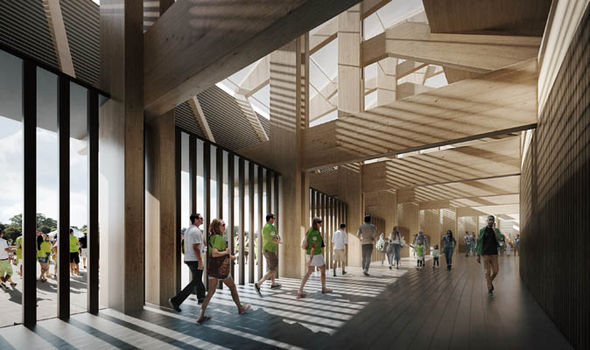 SWNS
It is expected the construction to take two to three years due to its complexity
“They've designed one of the five stadiums for the next World Cup in Qatar, and now they've designed one for Forest Green.
“The really standout thing about this stadium is that it's going to be entirely made of wood - the first time that will have been done anywhere in the world.
“The importance of using wood is not only that it's a naturally occurring material, it has very low carbon content - about as low as it gets for a building material.
“And when you bear in mind that around three quarters of the lifetime carbon impact of any stadium comes from its building materials, you can see why that's so important - and it's why our new stadium will have the lowest carbon content of any stadium in the world.
“We're thrilled with the concept and the amount of thought Zaha Hadid put into their design - their experience of stadia design and their ability to put environmental issues at the heart of what they do really stood out.
“They took a really challenging brief, ran with it, and have given us an iconic and original new stadium.
“We've done as much as we can to make our current stadium properly sustainable, but we are limited with what we can do - it simply wasn't built with the environment in mind.
“At Eco Park, we've started with a blank sheet of paper, and we'll be going further than anyone has done before - this really will be the greenest football stadium in the world.” 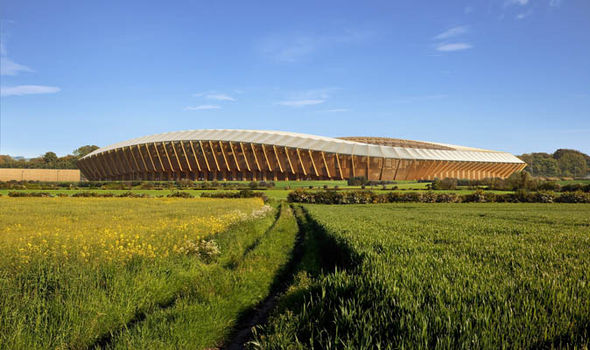 GETTY
1 of 47
Can you name these famous football stadiums and the teams that play in them from these aerial shots?
The stadium would be built near Junction 13 of the M5 near the village of Eastington and has been designed specifically with the possibility to expand to a 10,000 seater in the future.
Mr Vince said it would include no concrete and no steel and added that the stadium would be fire-proof.
The curved oval roof would be completely transparent.
Zaha Hadid Architects have won numerous architectural prizes, including the Royal Institute of British Architects' top Stirling Prize two years running.
Jim Heverin, director at the firm, described the stadium as an important addition for the club, and for the community.
“We are very proud to be selected to build the new home for Forest Green Rovers - it will not only be a new stadium, but also an important addition for the community,” he said.
“The club's heritage, ambition and vision reflect our own, combining the latest material research and construction techniques with new design approaches to build a more ecologically sustainable and inclusive architecture. 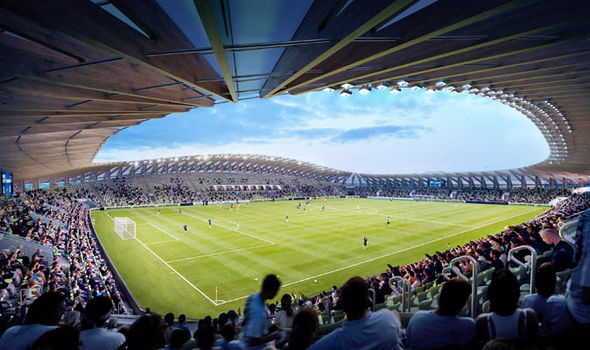 SWNS
The stadium plans allow for it to be expanding to a 10,000 seater in the future


“With the team's community and supporters at its core, fans will be as close as five meters from the pitch and every seat has been calculated to provide unrestricted sight lines to the entire field of play.
“The stadium's continuous spectator bowl surrounding the pitch will maximise match day atmosphere.
“Forest Green Rovers' new stadium and Eco Park aims to be carbon neutral or carbon negative, including measures such as the provision of on-site renewable energy generation.
“The buildings on the site, and their embodied energy, play a substantial role in achieving this ambitious target and demonstrate sustainable architecture can be dynamic and beautiful.”
Mr Heverin added he expected the construction to take two to three years due to its complexity.
The club also had a pair of virtual reality goggles which allowed the players and visitors to look at a 360 view of the stadium from the inside and outside.
Forest Green announced the competition in March this year, and quickly received over 50 entries from around the world, including Sweden, Germany, France, Britain and the United States. 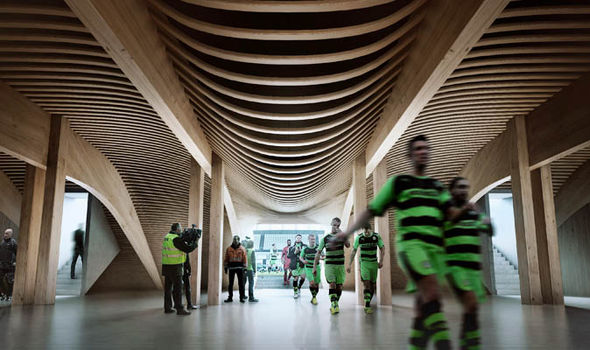 SWNS
Zaha Hadid Architects won the bid to build the new world’s first wooden stadium
In May, the club shortlisted nine entries, before selecting two finalists in August, who were given another two months to take their concepts further, including building scale models.
The runner-up entry came from Glen Howells Architects, the firm who designed the award-winning Gloucester Services on the M5.
Mr Vince said: “Glen Howells also produced an exceptional design - and they impressed us as much as their design did actually. As a result, we're going to work with them on some future projects.”
Forest Green manager Mark Cooper said the stadium would be key to the club's growth over the next few seasons.
“It's a fantastic building and it fits in perfectly with what the club believe in,” he said.
“We want to be in the position of being quite high up the football pyramid when we move into it, so that we have a team and a status that is fit for such a wonderful stadium.”

You might qualify for a new solar energy program.
Click here and find out if you are eligble now!