Protecting parkland is not a priority for government:
Futures Forum: State of Nature ... and paving paradise
Futures Forum: Of 'urban wildlife' and 'brownfield sites'...
Futures Forum: "The future of parks is in the hands of partnerships"... and... "People in the South West need to be prepared to fight to preserve their parks and green areas, to save them from the threat of sell-offs or neglect."

There are threats to the District's public open spaces:
Local councils need to be proactive in saving their open spaces | Open Spaces Society

In Seaton:
CAMPAIGNERS have expressed disappointment as one of the last open spaces in an East Devon resort is to be developed. | Plymouth Herald

Indeed, things don't look too good:
Further evidence for the Local Plan and EDDC tries to pass the buck to the National Trust and Woodland Trust for required open spaces | East Devon Watch

The Woodland Trust campaigns for trees and their spaces - and earlier in the year they were very supportive of a Parliamentary committee looking at these issues:

We’re delighted that the Communities and Local Government Select Committee has announced an inquiry into the future of open spaces. 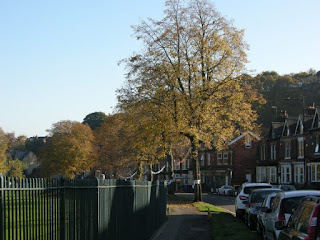 We’re especially pleased to hear that the committee want a wide response to their survey, because you can make a real impact on the recommendations they will make to the Government.
‘Public parks’ in the UK are the country parks, smaller ‘pocket’ parks, woodland areas and open green spaces which are cared for by the local authority. Having dedicated space for parks is very important for trees, especially in urban areas where vital tree cover is low.

Due to changes in the way local authorities are funded, they have to find new sources of revenue and cut existing costs of their services. Sadly this appears to be having a disproportionate effect on parks, as they are a “non-statutory” service of local authorities. This is not a new phenomenon – when I worked for a local authority in the 1990s, the Parks Manager was often faced with making a £100,000 reduction in his maintenance budget. However, there is a limit to how often a parks maintenance budget can take such “salami-slicing” before maintenance stops.
In fact I’ve already seen one London borough announce a proposal to sell-off of 27 small local parks, to provide much needed capital and retain budget for maintenance of its strategic parks. So far four of those parks have been sold – a huge loss of amenity and breathing space for the local residents.
The potential for sales of public parks is not only a threat to ancient woodland, but to the many veteran and ancient trees which are in parks, too. These trees make a massive contribution, in biodiversity and amenity - and often culturally - to that open space.

Are there other solutions?

It was only a matter of time before woodland was considered as an asset for sale. Perhaps the sale of woodland by the Lake District National Park has generated the most publicity, but on the flip side this has stimulated an interest in community woodland management and asset transfer. The Trust is running a pilot project in the north of England, offering grants to help with community woodland management in: Cumbria, Northumberland, Yorkshire, Derbyshire, Nottinghamshire, Cheshire, Lancashire, Merseyside, GTR Manchester, Tyne and Wear, County Durham and Teeside.
However, it is unrealistic to suggest that all parks and woodland can be managed by the community, so what else should be done? The Rethinking Parks project looked at new ways to fund public parks, and came up with several useful key findings, but noted that none of the ideas tested is forecast to completely replace local authority funding.
Our own ‘Trees or Turf?’ report shows that is often cheaper to create and manage woodland on amenity grassland; with proper consultation and consent of the park users, and not at the expense of formal recreation such as sports pitches, this can be a very positive option.
The ideal solution would be to make providing well-managed public open spaces a statutory service. This would put parks on the same footing as other essential local authority services. This is not to say that other vital community services should then be cut; we see the retention and management of public parks and woodland as part of a holistic service for the local community, as they are used by all sectors of the community and offer many benefits.
A statutory footing for parks management is a long-held ambition of the National Federation of Parks and Green Spaces. It’s not yet clear if the government has the appetite to take this step forward. So the first step is to convince the committee of the merits of this suggestion, and others.
Shaping the future of public open spaces - Woodland Trust

The consultation is now closed - but the issues are still very much with us:
Young people urged for park-life views - BBC News
The crisis in Britain’s parks is a social justice issue | Graham Duxbury | Opinion | The Guardian
Cherish our public spaces – among the glories of the democratic age | Rowan Moore | Opinion | The Guardian
.
.
.
Posted by Jeremy Woodward at 13:32