The planning inspector has allowed the inclusion in the County's Minerals Plan of the controversial site for a quarry outside Ottery St Mary:
Futures Forum: Quarrying in East Devon > Straitgate site endorsed as preferred area in Devon Minerals Plan

Next Wednesday will see the developers putting on an exhibition in Ottery:

The group campaigning against the development is not impressed:
Straitgate Action Group: Glossy leaflets for AI's unsustainable plans land on Ottery doormats

Neither is Ottery's Town and County Councillor: 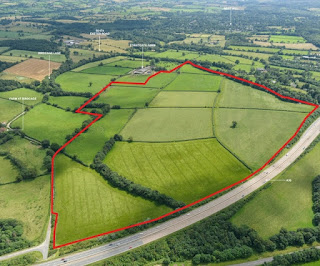 Aggregate Industries will hold yet another public exhibition on its controversial plans to quarry at Straitgate Farm, on the edge of Ottery St Mary.

The company will display its proposals next Wednesday (23 November) between 2 and 8pm at the Institute in Yonder Street on a quarry that would take up around 100 acres of greenfield countryside.

Around two miles of hedgerow is proposed to be ripped out.

The exhibition will take place as Devon County Council’s development management committee meets to decide on the Devon minerals plan - and the fate of Straitgate Farm in the overall quarry strategy for Devon.

Last month a planning inspector approved plans to quarry at Straitgate Farm, off Barrack Road, despite no site for processing being agreed, despite Devon County Council highways objection to the proposed access onto the tiny Birdcage Lane which is proposed to be widened, and then onto Barrack Road ....and despite concerns from the Environment Agency about the potential impact on an underground watercourse that feeds ancient woodland and provides drinking water for well over 100 people.

The company appears to have finally given up asking to process the sand and gravel at Blackhill Quarry on Woodbury Common, which was disallowed due to EU regulations protecting the flora and fauna there…. they now propose to process the material at an existing quarry at Uffculme - a 46 mile round trip. So much for sustainable development!

I would have thought it was a presumptuous to hold an exhibition on plans to quarry here before the council has even formally decided whether or not to include the land in its minerals plan!

I will be attending the development management committee meeting next week to ask them to exclude Straitgate from the plan.

Regardless of Wednesday’s planning committee decision, it is expected that a planning application will be submitted shortly.