Knowle relocation project: >>> a far more imposing development than assumed >>> "Until PegasusLife provide a proper Townscape and Visual Impact Statement covering all the views and perspectives on this massive development, (2.1 times the size recommended in the Local Plan), the DMC should not be asked to make a fair and accurate assessment of the proposal's worthiness for Sidmouth."


It is clear that the proposed development at Knowle will be more than simply imposing on the immediate neighbourhood.

The developer has taken exception to these visual representations which challenge its proposals.

Which can also be seen here as a pdf:
planningapps.eastdevon.gov.uk/Planning/StreamDocPage/obj.pdf?DocNo=2480855&PDF=true&content=obj.pdf

Most of this document is taken up by attempts to refute the photomontages created to depict the impact the proposed development on the town and valley.

This response has just been received from the author of those pictures:

Response by the 'Unknown Third Party'
(Peter Nasmyth) to: 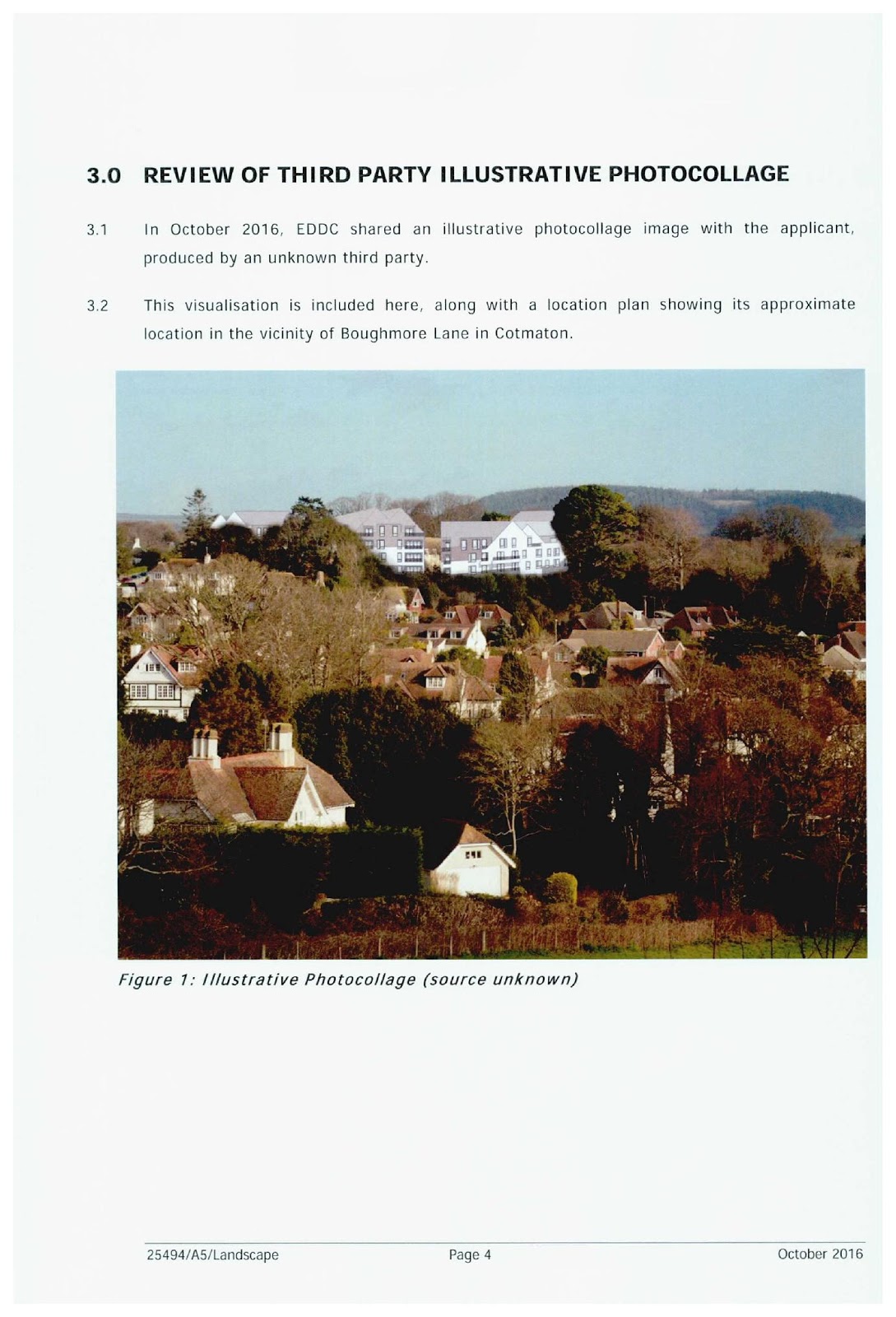 3.3
In the vicinity of the viewpoint the lane extending east along the southern edge of the
field to the north. comprises a grassed track providing access to a single private dwelling
with no through route further to the east. The image appears to be a view from the private
garden of the last (eastern-most) property on (north-west of Cotlands).
which lies on slightly elevated land to the south of the lane. This is deduced from the
hedgerow vegetation in the foreground which only just extends up into the view. It is
unlikely that a person standing in the lane would have such an elevated view above the
hedge even if it had been trimmed. In either scenario this is not a viewpoint that is
representative of the public visual experience.

Wrong - the photograph was taken from the upper section of Cotlands housing estate. The viewpoint is fully representative of the public visual experience.

3.4
Representative viewpoints for assessment of visual effects were agreed with EDDC prior to
the submission of the application. In accordance with paragraph 6.16 of the Guidelines for
Landscape and Visual Impact Assessment (3rd Edition) 2013 these viewpoints are all
publicly accessible locations. No requirement for private viewpoints was expressed by
EDDC.

If this is true, why did EDDC Planning not request this obvious west view of the development? Might the Council's desire to sell (dependent on their own Planning Permission) have influenced the creation of a 'one-sided' Statement for their own DMC?

3.5
The photocollage is also obviously inaccurate. It appears to be a cropped extract from the
submission elevation drawings manipulated in Adobe Photoshop or similar software; and
crudely masked into a baseline photograph. The manipulated two-dimensional images of
buildings are clearly distorted in form and no description is given of attempts to provide an
accurate scale of the built forms in the image. The imagery used does not reflect the actual
material surface of the proposed built forms as shown in the verified photomontages used
for the planning submission and the CGls. Foreground vegetation is shown as removed with
an apparently arbitrary feathering of the edges of the vegetation shown in the image.
The proposed planting of substantial canopy species along this boundary, between the
viewpoint and the proposed built form, including Sweet Chestnut and Tulip Tree species,
has been omitted.

As is suggested, the photocollage does not reflect the actual materials to be used. This is because it used the only information on the building masses publicly available at the time (August 16). It sets out purely to show the height and rough visual mass effect of the structure on west Sidmouth.
Foreground vegetation is removed because Building E sits on top of it. Proposed planting is ignored for the same reason the 'die-off' of existing trees is ignored - due to the time scale involved.

3.6
Finally, no methodology for how the image has been prepared is provided. There is no
attempt to demonstrate or explain that the photograph has been accurately aligned to the
image shown. There is no indication of the correct scale for viewing.

The building heights were checked (and adjusted) after inspection by a local architect. These are of necessity approximate, but extremely close. The methodology can be supplied. We request a west view photomontage from PegasusLife (with methodology supplied).

3.7
For the reasons given, the image is inaccurate and unrepresentative; does not confirm to
Landscape Institute Advice Note 01/11 Photography and Photomontage in Landscape and
Visual Impact Assessment; and cannot reasonably be afforded any weight in consideration
of townscape or visual impact.

For reasons given below, nor can the Townscape and Visual Impact Statement.

RESPONSE;
1)      Why were PegasusLife asked only to produce a 'commentary' on my photomontage - instead of providing a photomontage of their own showing this crucial view of the new development?
2)      Why was this view from Cotlands (not Boughmore Lane as stated in 3.3 of the Barton Willmore Addendum) never covered in the original Townscape and Visual Impact Statement, and still not?
3)      Why is there no comparable view to P5 in the TVIS (taken half way up Salcombe Hill) from the west side? This is a glaring omission. The Peak Hill side view - visible from numerous roads and houses including the golf course, has been completely ignored. The only west side view is P1, from 100 yards away looking up a narrow, hedged section of Knowle Drive. This is not a Visual Impact Statement, it is a one-sided (literally) Visual Impact perspective, with so many omissions as to be inadmissible.
4)      Until PegasusLife provide a proper Townscape and Visual Impact Statement covering all the views and perspectives on this massive development, (2.1 times the size recommended in the Local Plan), the DMC should not be asked to make a fair and accurate assessment of the proposal's worthiness for Sidmouth.

See also:
Futures Forum: Knowle relocation project: revised plans from PegasusLife >>> a call for the applicant to re-submit with major changes
.
.
.
Posted by Jeremy Woodward at 13:29