Climate change: "The world becomes increasingly volatile as nativist voters support isolationist policies. International diplomacy fails and subsequent conflicts result in more countries relying on their own energy resources—whatever is cheapest and most readily available. More coal is burned than ever before. Global warming increases, seas rise, and the world and civilization as we know it disappear."


We've had Clexit:
Futures Forum: Brexit: and Clexit: or the links between Eurosceptics and climate change sceptics

Now we've got Trumpxit:
Futures Forum: ‘How can someone with no facts be wrong’?


TRUMP AND THE TRUTH: CLIMATE-CHANGE DENIAL 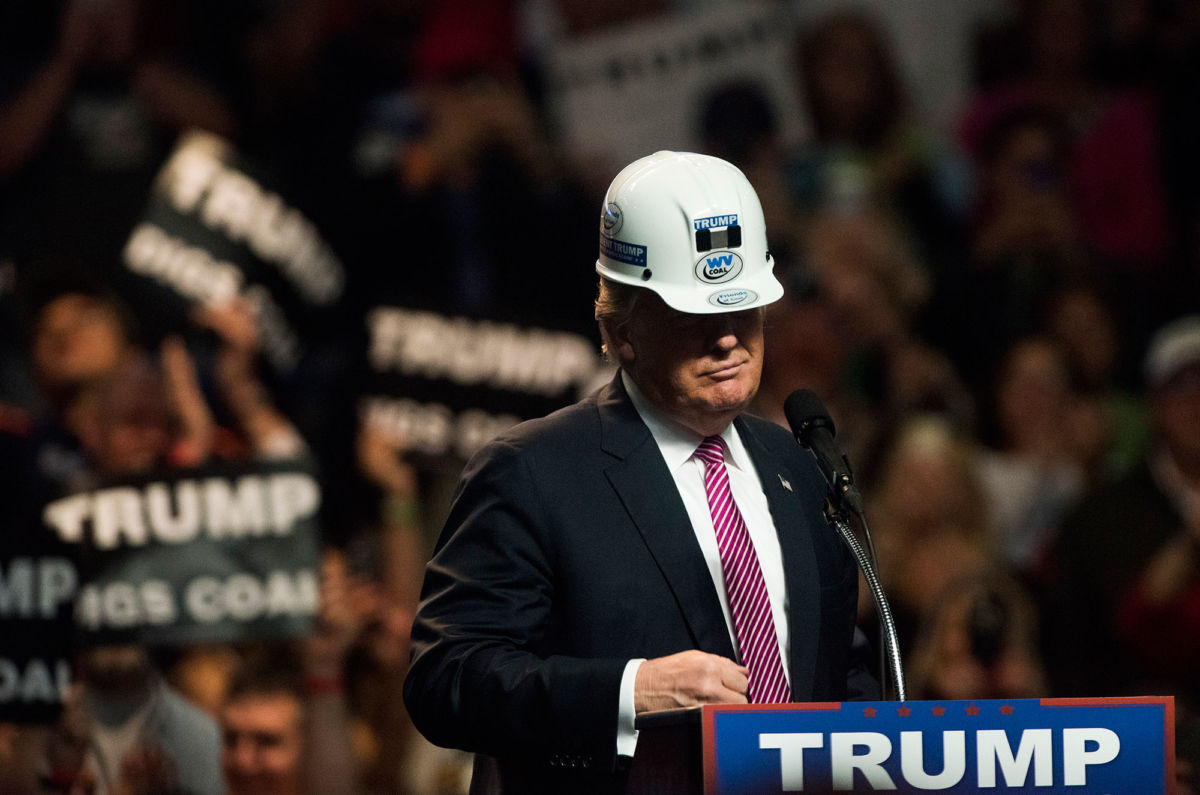 Donald Trump’s energy plan would essentially reverse every step Obama has made toward reducing carbon emissions and meeting the goals established in Paris.
PHOTOGRAPH BY TY WRIGHT / THE NEW YORK TIMES / REDUX

This essay is part of a series The New Yorker will be running through the election titled “Trump and the Truth.”

Over the past four years, Donald Trump has, at different times, declared global warming a “canard,” “nonexistent,” a “make-believe problem,” a “big scam,” and “a very, very expensive form of tax.” During the first Presidential debate, late last month, Hillary Clinton pointedly accused him of believing that climate change is a hoax perpetrated by the Chinese. Trump denied it. “I did not—I do not say that,” he scoffed. But a 2012 tweet, written by Trump less than a week after Hurricane Sandy battered New York and New Jersey, was still up: “The concept of global warming was created by and for the Chinese in order to make U.S. manufacturing non-competitive.”

Trump’s “Chinese hoax” theory had been in the news before. In January, Bernie Sanders mentioned it during a Democratic primary debate. The following morning, the hosts of the Fox News program “Fox & Friends” played the clip for Trump, prompting him to respond. “Obviously, I joke,” he said, before adding, seriously, “This is done for the benefit of China because China does not do anything to help climate change.” His message, however scrambled, appeared to be that if China was not going to let “weather changes” slow down its industrial growth, then America shouldn’t, either.

Then, in September, President Obama and the Chinese President Xi Jinping formally ratified the international climate-change pact reached last December, in Paris. The agreement, signed by nearly two hundred nations, came after two decades of attempts to establish an international accord. It pledges to keep the global temperature increase to “well below 2°C,” or 3.6 degrees Fahrenheit, and “to pursue efforts to limit” the increase to “1.5°C above pre-industrial levels.” If and exactly how China and the U.S., which together account for forty per cent of the world’s greenhouse-gas emissions, will follow through on their commitments remains to be seen—the agreement is not legally binding. Nonetheless, the U.S. and China’s ratification of the agreement was widely celebrated as a breakthrough in the international effort to slow global warming. Trump, for his part, called the Paris climate talks “ridiculous” while they were happening, and has pledged to “cancel” the agreement if elected President. According to a Sierra Club report, if elected, Trump would be the only world leader who denies that man-made climate change is occurring.

Trump and the Truth - The New Yorker


Trump’s energy plan, which he laid out in a speech in May, would essentially reverse every step Obama has made toward reducing carbon emissions and meeting the goals established in Paris. (This, like much of Trump’s climate talk, is perfectly aligned with the Republican Party’s platform.) Trump wants to “rescind” the Environmental Protection Agency’s Clean Power Plan, which would impose new, more stringent regulations on power plants, especially coal-burning plants. (The plan is currently tied up in federal court.) Trump would also open much more land to fossil-fuel exploration and drilling, immediately approve the Keystone XL pipeline, and “stop all payment of U.S. tax dollars to global-warming programs.”

But the real boon of Trump’s energy plan has been the way it has allowed him to pander to voters in coal country. On May 5th, in West Virginia, he told a crowd at a rally, “The miners . . . all over are going to start to work again, believe me. They are going to be proud again to be miners.” These were empty promises. Despite historic growth in U.S. coal production over the past three decades, the number of coal-mining jobs in the country has steadily declined. Developments in the coal industry itself share some of the blame: strip mining and new, more efficient machinery require fewer miners than older methods. The day before his West Virginia rally, Trump told a crowd in Indiana, “Your coal industry is wiped out, and China is taking our coal.” This statement, too, was pandering, any way you read it. If Trump meant that China was stealing potential U.S. coal markets—exporting to countries that otherwise might have bought American coal—he is wrong. China is now the world’s largest coal importer. But if Trump meant that China was actually, physically “taking” our coal—that is, importing American coal—that would be good for coal-mining jobs. (China currently imports only a small amount from the U.S.)

More recently, in Pittsburgh, Trump gave a speech about natural gas and coal that rested on an entirely fictional premise. “The shale energy revolution will unleash massive wealth for America,” he said. “And we will end the war on coal and the war on miners.” Together, these two ideas made little sense. The boom in shale-natural-gas production—driven by advances in hydraulic fracturing, or fracking—has caused the demand for coal to tank. Natural gas is twenty per cent cheaper than coal and twice as efficient. As Robert N. Stavins, the director of the environmental-economics program at Harvard, told the Times, “If the Trump administration wanted to help coal, it could ban fracking. But he can’t have it both ways.”

Nevertheless, on Sunday, at the second Presidential debate, Trump continued entertaining his fossil-fuel fantasy, proclaiming that he’d bring back coal-mining companies and jobs. “There is a thing called clean coal,” he said. “Coal will last for one thousand years in this country.” Clean coal is often wielded as a kind of magic term, but here Trump was likely referring to capturing the carbon released by coal-burning power plants—a process that has largely proved to be an ineffective and cost-prohibitive folly.

Trump wasn’t always as keen on coal mining as he now claims to be. “If I had been the son of a coal miner, I would have left the damn mines,” he told Playboy in 1990. “But most people don’t have the imagination, or whatever, to leave their mine. They don’t have it.” His views on climate change have also evolved. In 2009, just before a round of international climate talks began in Copenhagen, Trump and three of his children were among the dozens of business leaders who signed an open letter, published as a full-page ad in the Times, which called on Obama and Congress to “lead the world by example” and “ensure meaningful and effective measures to control climate change.”

Three weeks ago, hundreds of American scientists, including dozens of Nobel Prize winners, signed a different public letter, this one stating that irreversible global warming is now under way owing to the burning of fossil fuels, no matter what politicians like Trump choose to believe. “During the Presidential primary campaign, claims were made that the Earth is not warming, or that warming is due to purely natural causes outside of human control,” the letter stated. “Such claims are inconsistent with reality.” Urgent action is necessary to avoid catastrophe, the scientists warned.

But even if Trump loses in November, and the U.S. sticks to all the climate-friendly policies and plans that the Obama Administration has put forward, additional measures will likely be required to bring carbon emissions down to the goal set in the Paris Agreement. This is the conclusion reached in a paper published last month in the peer-reviewed journal Nature Climate Change. Meanwhile, the Norwegian oil-and-gas corporation Statoil, in its most recent report on future energy trends, has added a new scenario: “a series of political crises, growing protectionism, and a general fragmentation of the state system, resulting in a multipolar world developing in different directions.” In this scenario, the world becomes increasingly volatile as nativist voters support isolationist policies. International diplomacy fails and subsequent conflicts result in more countries relying on their own energy resources—whatever is cheapest and most readily available. More coal is burned than ever before. Global warming increases, seas rise, and the world and civilization as we know it disappear. At what point Trump might stop shouting about clean coal is unknown.

Carolyn Kormann is a member of The New Yorker’s editorial staff.


READ SOMETHING THAT MEANS SOMETHING

Try The New Yorker for only a dollar a week. SUBSCRIBE NOW.


WATCH: What would a Trump Presidency actually look like?

Trump and the Truth: Climate-Change Denial - The New Yorker