One of the ideas behind Brexit is 'sovereignty':
Futures Forum: Brexit: and sovereignty and Devon

The TTIP agreement, much-maligned by the new US President because it was an affront to 'sovereignty':
Futures Forum: The Transatlantic Trade and Investment Partnership >>>> "I’d vote against TTIP, except, hang on a minute, I can’t."

... has been dropped:
Futures Forum: Brexit: and the Transatlantic Trade and Investment Partnership

Last weekend's Observer looked at a potential trade deal with the States:


Is chlorinated chicken about to hit our shelves after new US trade deal? 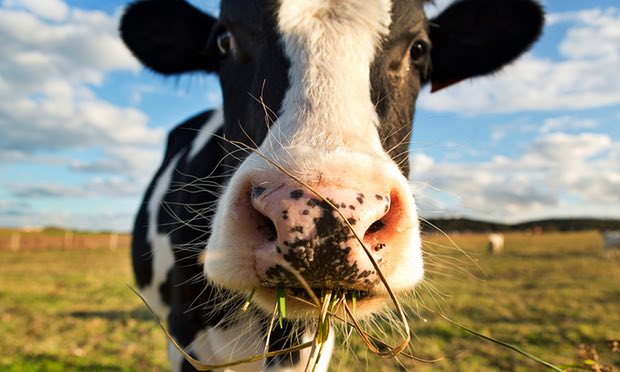 To make them grow faster, US dairy cows are regularly implanted with hormones that are banned in the EU. Photograph: Tony C French/Getty Images


Those of us who want to eat safe, healthy food awoke to a nightmare on Tuesday, a chilling interview on Radio 4’s Today programme. Bob Young, chief economist at the American Farm Bureau Federation, made it crystal clear that any US trade deal struck by Theresa May would be contingent on the UK public stomaching imports of US foods that it has previously rejected: beef from cattle implanted with growth hormones, chlorine-washed chicken, and unlabelled genetically modified (GM) foods.
Wiping the sleep from our eyes, we hoped it was just a bad dream, but the grim reality worsened. Martin Haworth, director of strategy at the National Farmers Union (NFU), was up next. Surely our own farmers, who have worked for decades to stricter EU standards shaped by consumers’ demand for safe, natural food, would reiterate their commitment to keeping them? Not a bit of it. Haworth’s only concern was that if such controversial American products were allowed into the country, British farmers should be able to use the same production techniques to ensure “an even playing field”. Do you find it credible that British farmers could beat the US’s vast industrial feedlots, hi-tech poultry plants and vast GM prairies at their own game? No matter, the NFU does.
Later, at prime minister’s questions, the Scottish National party MP Angus Robertson pressed May for the reassurance that everyone who cares about food quality and safety badly wants to hear. Would she tell Trump she wasn’t prepared to lower our food safety standards? Judging from May’s evasive reply – she would improve trade through prosperity, growth, jobs, putting UK interests and values first – it seems entirely possible that she would bin existing food rules in order to clinch a deal.
For decades, the food on our plates has been protected – albeit inadequately – by virtue of our EU membership. Food on British shelves differs in critical ways from the US equivalent. Citizens in Europe loudly opposed the Transatlantic Trade and Investment Partnership (TTIP) that sought to impose on us the US “Big Food” model. But now it looks as if Trump and May could usher in a bilateral version of TTIP with bells on.
So the nightmare is real, although there is a ray of hope. Post-Brexit, we can’t continue to sell British food to mainland Europe unless it meets EU standards. And losing concrete business with the EU in the vain hope of gaining some notional trade advantage with the US sounds like a deal-breaker.

Eighty-two pesticides are banned in the EU on health and environmental grounds – but not in the US. Among these 82 pesticides are permethrin, the broad spectrum insecticide that is classed as a likely carcinogen and suspected endocrine disruptor, and atrazine, a herbicide thought to affect the immune system, which has also been linked to birth defects.
A US-UK trade deal opens the door to imports of American foods grown using these pesticides. The US would probably also lean on the UK government to relax our EU-set “maximum residue levels” for pesticides in food. Even people who boycotted US imported food would probably end up eating more residues in food because British growers would no longer have to control their spraying regimes to keep residues within EU limits.

Derivatives of GM maize and soya are in thousands of processed foods in the US. American consumers’ demands to see them labelled have been quashed by lobbying from big biotech companies, notably Monsanto. In the US, the only way to avoid eating GM ingredients is to buy organic food to cook at home and never eat out.
In the EU, foods made using GM ingredients must be clearly labelled as such, and consumers have shown repeatedly that they don’t want to buy them. The only GM foods currently on British shelves are sweet imported American junk foods, and cheap cooking oils aimed at the catering trade.
No GM crops are grown commercially in the UK. Scotland, Wales, and Northern Ireland have all effectively banned their cultivation. Currently, EU states have the right to ban the import of GM food. In the event of a US-UK trade deal, farmers on both sides of the Atlantic might argue that GM labelling, and cultivation and import bans, are discriminatory barriers to trade.

Processed foods in the United States typically contain many more additives and hi-tech ingredients than their equivalents in Europe. Several food additives banned in Europe are permitted in the US. These include petroleum-derived food colourings, azodicarbonamide, the chemical used to bleach flour that has been linked to asthma, and potassium bromate, a chemical that reduces the time needed to bake industrial bread. It has been associated with kidney, nervous system and gastrointestinal disorders.
British companies could argue that if they are to compete with US imports on price, they must be allowed to use these problematic additives.

In the US it’s perfectly legal to “wash” butchered chicken in strongly chlorinated water and to spray pig carcasses with lactic acid. Abattoir companies present these as belt-and-braces methods of reducing the spread of microbial contamination from the animal’s digestive tract to the meat.
These practices aren’t allowed in the EU, and the dominant European view has been that, far from reducing contamination, they could increase it because dirty abattoirs with sloppy standards would rely on it as a decontaminant rather than making sure their basic hygiene protocols were up to scratch.
There are also concerns that such “washes” would be used by less scrupulous meat processing plants to increase the shelf-life of meat, making it appear fresher than it really is.
If the UK were obliged to accept chlorine chicken and acid-washed meat from the US, this would not need to be flagged up on product packaging because these washes and sprays would count as “processing aids”, which don’t need to be labelled.

The EU has a general ban on the use of synthetic hormones to promote growth in farm animals because the European Food Safety Authority says that there isn’t enough data to fully assess potential human health risks, such as increased cancer, and early puberty.
In the US, synthetic hormones are considered safe, and intensively reared beef cattle and dairy cows are often implanted with them. Pigs are also treated with the beta-agonist drug Ractopamine, which has hormone-like bodybuilding effects.
Globally, there is heightened awareness that the overuse of antibiotics in farming is encouraging the emergence of bacterial infections in animals and humans that are resistant to key groups of these vital drugs. The latest data shows that 75% of medically important antibiotics in the US were given to farm animals. In the UK, the equivalent amount is lower (40%), largely because EU farmers have not been allowed to use antibiotics to make their animals grow bigger more quickly – or produce more milk.
Once a UK-US trade deal was signed, US meat processors would be likely to see big opportunities to get their pork – and to a lesser extent, their beef – into the UK. These imports would probably be purchased by processed food manufacturers. And as their multi-ingredient products don’t have to list the country of origin of individual ingredients, there would be no sure way of avoiding eating milk or meat produced to less exacting US standards, unless you never ate processed food.

ANIMAL BYPRODUCTS FED BACK TO LIVESTOCK

Powerful US meat and grain corporations want the EU to drop restrictions on animal byproducts (abattoir offcuts and waste) in animal feedstuffs, arguing that it is a barrier to trade aimed at protecting our internal market. The American Feed Industry Association has already challenged this EU rule on the grounds that its industry experienced a 62% drop in exports over the past decade because of it.
The practice of feeding slaughterhouse byproducts, such as brains and spinal cord, back to animals in their rations can result in outbreaks of livestock diseases: swine fever, foot and mouth disease and mad cow disease. It is thought to be the most likely cause of in humans.
The UK’s willingness to accept imports of animal feed manufactured with animal byproducts (and GM soya) could be a prerequisite of any US trade deal.

Is chlorinated chicken about to hit our shelves after new US trade deal? | Environment | The Guardian
.
.
.
Posted by Jeremy Woodward at 01:00